Behind the ‘Wild West’ of School Reopenings 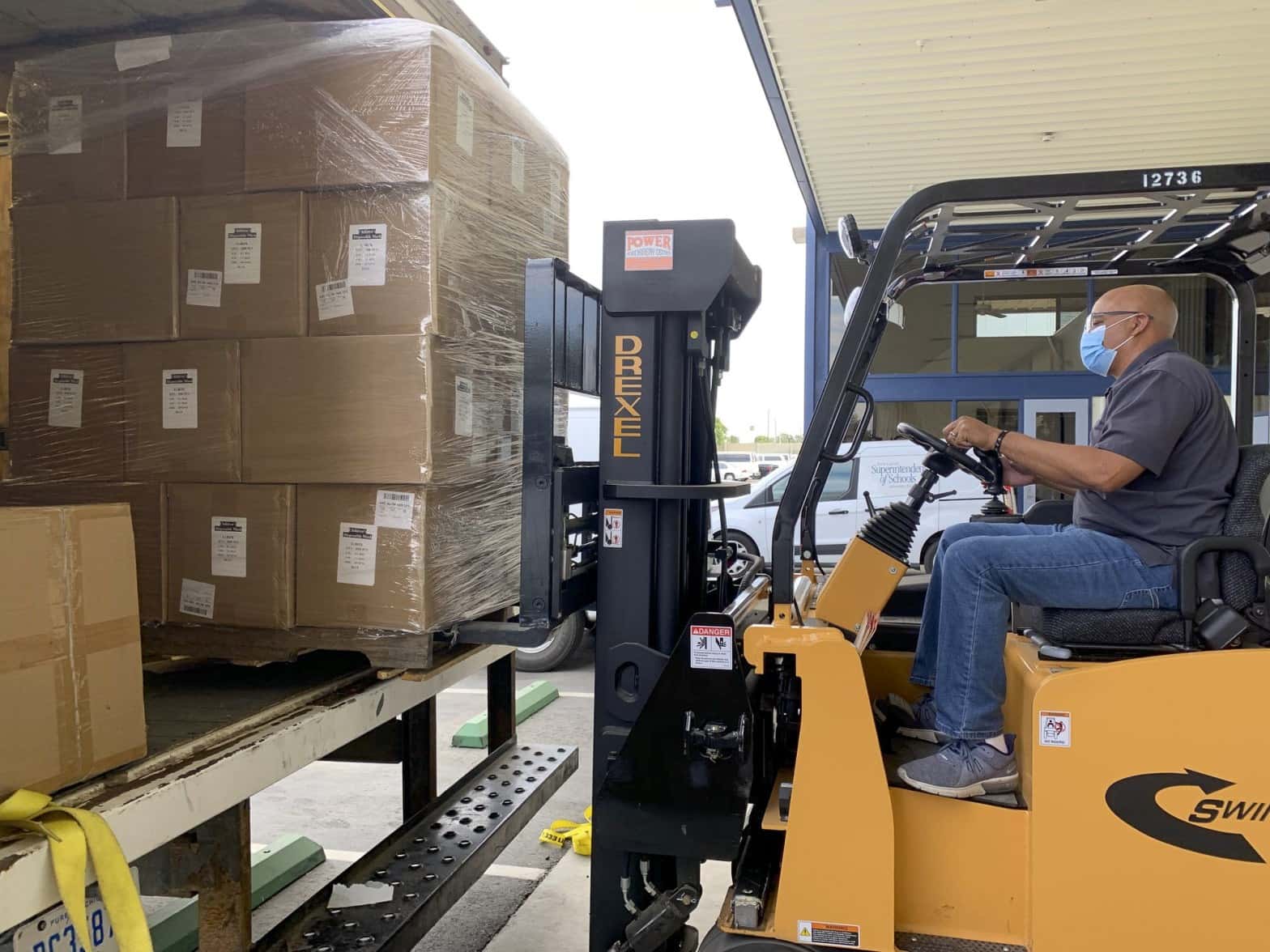 By Ricardo Cano and Ana B. Ibarra

An academic year in which public education will intersect with public health has created back-to-school shopping lists unlike any other for California’s schools as they attempt to transition toward in-person instruction once they have the state’s blessing.

While an overwhelming majority of students began the year in distance learning, schools are preparing for that moment, sourcing personal protective equipment for teachers and kids in a competitive market, figuring out how they will trace coronavirus cases and test employees, and wondering just how far their dollars will stretch this year.

Bakersfield’s Panama-Buena Vista Union School District plans to hire a manager to handle contact tracing for a system of 19,000 students and 4,000 employees.

Anaheim Union High School District spent more than $500,000 this summer on additional band instruments so students won’t have to share clarinets, saxophones and flutes to reduce risk of spreading the coronavirus.

Among the few California schools to physically reopen, Yreka Union High School District near the Oregon border is spending about 10% more than it would in any given year to hire more maintenance staff to support exhaustive cleaning efforts.

While an overwhelming majority of students began the year in distance learning, schools are preparing for that moment, sourcing personal protective equipment for teachers and kids in a competitive market, figuring out how they will trace coronavirus cases and test employees, and wondering just how far their dollars will stretch this year.

The laundry list of safety measures schools are spending on is due to new state public-health requirements they will have to abide by for in-person learning, and mounting pressures to bring students back to campuses to help stop widespread learning loss and revive a sputtering state economy.

Doing that will require safety precautions to help prevent coronavirus outbreaks and give parents, students, teachers and staff enough confidence to return in person. The exact costs related to health and safety measures depend on how much of the year schools will offer in-person instruction. That amount of time is in turn tied to local health conditions and, school officials say, whether they will have enough money in their budgets to sustain it.

This summer, Gov. Gavin Newsom’s Office of Emergency Services procured a 60-day supply of protective equipment for the state’s 1,037 school districts, anticipating that campuses were going to physically reopen to begin the new term. Order forms of the $53 million shipment obtained through a public-records request partially illustrate the scale and cost attached to reopening schools for the state’s 6.1 million K-12 students:

The state and FEMA have helped with masks. In some counties, such as Kern, hospitals and businesses have chipped in with donations for personal protective equipment, or PPE. But high demand for supplies have driven up costs and attracted sketchy vendors looking to make money off some districts in urgent need of supplies.

School leaders have called on the federal government to help with the extraordinary costs of doing distance learning and physically reopening schools they say could threaten efforts to bring students back on campuses.

In San Diego Unified, superintendent Cindy Marten said a precarious budget situation will affect how quickly and to what extent the state’s second-largest school district will be able to offer in-person instruction this year. To date, the district has spent $11 million on personal protective equipment.

“When the funding’s not there, we will have to stop (reopening),” Marten said Thursday, calling on Congress to pass a financial relief package for schools. “When you reopen and you can’t put the appropriate nursing and counseling and distancing in place and physical changes that need to happen, you slow it down or you don’t do it as safely.”

The federal government’s lack of involvement in procuring protective gear for hospitals has meant state governments competing with each other for supplies, driving up prices and putting individual school districts at a disadvantage, said Robert McEntire, director of management consulting services for School Services of California.

For example, the cost of industrial-size Lysol disinfectant, about $6.50 in ordinary times, now costs as much as $19, McEntire said.

“When you get these small districts operating on their own for their own supplies, they’re struggling to compete, and often if they can even get stuff, they’re paying far more for it,” McEntire said.

That has helped create a “Wild West” of procurement, he said, that has drawn “fly-by-night people looking to profiteer” from schools that struggled to get protective gear and technology through their normal suppliers. The Panama-Buena Vista district spent this summer buying electrostatic foggers for each of its 24 schools that custodial staff will use to deep clean classrooms, which will each have “sanitation stations” teachers and staff can use for minor disinfection. The district spent money on air purifiers to help dissolve aerosol particles indoors, as well as extra N95 masks for special education teachers to wear when working with special-needs students who might not be able to wear their own face coverings.

Though the distance learning start has meant more time for schools to prepare for in-person learning, it’s unclear when that will happen for Kern County schools. As of Thursday, the county was still in the purple tier of the state’s new reopening guidelines, meaning schools can’t reopen. In July, before new state guidelines that almost entirely shut the door on campus reopenings, the Panama-Buena Vista school board planned on giving families the option of sending kids to school five days a week.

Maple Elementary, a district of 300 kids in Shafter, has spent about $225,000 on desk barriers, a mask stockpile, two student teachers to help with distance learning and two portable classrooms to help expand the school’s indoor capacity, according to superintendent Julie Boesch.

Like the rest of the state’s school districts, Maple is affected by deferrals — delayed cash payments to schools that the state used to plug its $15 billion education budget shortfall. With about 30% of the state cash flow to districts not coming until next school year, many schools are borrowing money and repaying it with interest this year to get by.

Instead of borrowing money, though, Maple has sent layoff notices to its instructional aides. Layoff protections to teachers and some classified employees approved by Newsom and the Legislature were intended to prevent schools from cutting personnel essential for school reopenings but have hamstrung some schools’ abilities to deal with volatile budgets.

That’s left Boesch, whose husband is a bus driver at a nearby school district, conflicted.

“As much as on a personal level I’m like, ‘OK, I’m glad (for my husband),’ on a professional level, that’s tying our hands with where we can cut expenses when we still have an enormous amount of costs,” Boesch said.

Some of the state’s classified employees — which include custodians, food service workers and instructional aides — have reported either not receiving enough supplies from their schools to their local unions, or not being notified when a colleague has tested positive.

The latter was the case recently when Ben Valdepeña, president of the California School Employees Association and a school custodian for 38 years, received an email from a local chapter. Several fellow custodians at a local school district were concerned about a colleague who’d been absent from work for two days with little explanation from their school leaders.

It was later found that the custodian, Valdapeña said, had tested positive for coronavirus.

“It’s scary to me. You have districts that do the exact right thing. They follow all the rules, they tell everybody what they need to know, and they may even send people home and quarantine them,” Valdepeña said. “And then you have other districts where it’s like they try to hide it.”

While most California students are doing distance learning, some teachers have returned to their classrooms to lead video instruction from there. Coburn said that in her district this means a daily screening of staff, which entails a questionnaire and temperature checks.

Valdepeña said schools should not underestimate the amount of cleaning supplies and gear it will take to sanitize schools on a routine basis, adding that custodial workers and employees “will need a ridiculous amount of PPE.”

At the global scale, many of the countries that have successfully reopened schools have done so with stellar hand hygiene, strict physical distancing and face mask requirements, said Dr. Anand Parekh, chief medical officer at the Bipartisan Policy Center, who is researching school reopenings worldwide. Some of the countries that opened schools without a face covering mandate did so because they had reached very low transmission levels, Parekh said.

Nationwide, a safe reopening would cost schools $22 billion in just protective gear, cleaning supplies, and additional school nurses and custodial staff, according to an estimate from the American Federation of Teachers.

Children and teens will be encouraged to bring in their own cloth face coverings, but if they forget theirs or don’t have one, schools will have to provide that for them, said Sheri Coburn, a school nurse in San Joaquin County and past president of the California School Nurses Organization.

And although the state has already distributed millions of masks to schools, including child size ones, there will likely be a need to resupply periodically. “So hopefully the state can continue to help,” Coburn said.

While most California students are doing distance learning, some teachers have returned to their classrooms to lead video instruction from there. Coburn said that in her district this means a daily screening of staff, which entails a questionnaire and temperature checks.

That, however, is not feasible for students. “We have high schools of 4,000 to 5,000 students, we would be there all day,” Coburn said. That is why when students return to the classroom, it will be up to parents to monitor their child’s symptoms, she said.