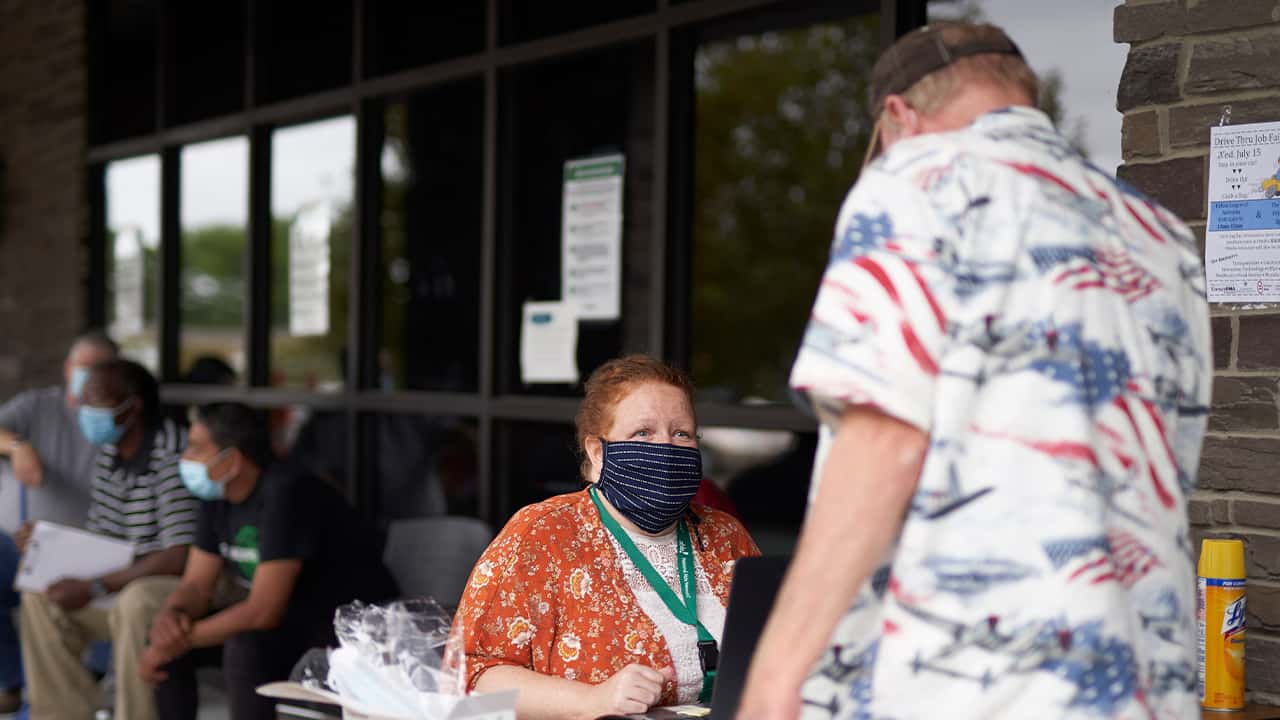 WASHINGTON — U.S. unemployment dropped sharply in August from 10.2% to a still-high 8.4%, with about half the 22 million jobs lost to the coronavirus outbreak recovered so far, the government said Friday in one of the last major economic reports before Election Day.

Employers added 1.4 million jobs last month, down from 1.7 million in July and the fewest since hiring resumed in May. And an increasingly large share of Americans reported that their jobs are gone for good, according to the Labor Department report.

Altogether, that was seen by economists as evidence that further improvement is going to be sluggish and uneven.

“The fact that employment is settling into a trend of slower, grinding growth is worrisome for the broader recovery,” said Lydia Boussour, an economist at Oxford Economics.

Still, President Donald Trump, who is seeking reelection in less than two months amid the worst economic downturn since the Depression in the 1930s, exulted over the latest unemployment figure, saying, “That is many, many months ahead of schedule.”

Still, President Donald Trump, who is seeking reelection in less than two months amid the worst economic downturn since the Depression in the 1930s, exulted over the latest unemployment figure, saying, “That is many, many months ahead of schedule.”

Democratic nominee Joe Biden downplayed the report and said the viral outbreak is still weighing on the economy.

“Donald Trump may be the only president in modern history to leave office with fewer jobs than when he took office,” Biden said. The U.S. has 4.7 million fewer jobs now than when Trump was inaugurated, but if the monthly gains continue at the same pace as in August, those jobs would be recovered by January.

Friday’s figures were the next-to-last employment report before the presidential election Nov. 3. For many voters, the unemployment rate is the most visible measure of the economy.

Should unemployment keep dropping rapidly, it could near 7% by early November, said Michael Strain, an economist at the American Enterprise Institute.

“That’s bad, it’s too high, many people will be suffering, but you can see healthy from there,” Strain said. “The question always has been: What’s going to matter more on Election Day — the rate of improvement of the economy or the absolute condition of the economy?”

The Outbreak Is Blamed for About 187,000 Deaths and Almost 6.2 Million Confirmed Infections in the U.S.

The drop in unemployment was sharper than most economists expected and was attributed mainly to businesses recalling workers who had been temporarily laid off.

Private companies added just over 1 million jobs in August, with the government providing nearly 350,000 others, including a quarter-million temporary census workers. The fall in private hiring from 1.5 million jobs in July was seen as a sign that employers remain cautious with the virus still out of control.

The outbreak is blamed for about 187,000 deaths and almost 6.2 million confirmed infections in the U.S., by far the highest totals in the world.

Richard Moody, chief economist at Regions Financial, noted that about half the private-sector job gains were in three categories: retail, restaurants, hotels and casinos, and health care. All have benefited from the reopening of most states’ economies.

“When the reopening effect wears off, the overall job gains in coming months should be considerably smaller,” he said.

After an epic collapse in the spring, when the economy shrank at a roughly 30% annual rate, growth has been rebounding as states have reopened at least parts of their economies. But uncertainty is running high, and many companies are still cutting jobs, with most of the layoffs permanent.

Casino and hotel operator MGM Resorts, slammed by declines in travel and tourism, said last week that it is eliminating 18,000 jobs. Coca Cola, which derives half its sales from stadiums, theaters and other venues that have been largely shut down, is offering buyouts to 4,000 employees. Bed, Bath & Beyond will shed 2,800 jobs.

More than 20% of small businesses are still closed, a figure that has been flat since June, according to Homebase, a provider of time-management software to small companies.

Roughly 29 million Americans are receiving state unemployment benefits but are no longer drawing an extra $600 a week in federal jobless aid, which expired more than a month ago. The Trump administration has set up a program to provide some of the unemployed with $300 a week. But the new rules will make many ineligible.

Millions of people have given up looking for work since the outbreak began, many to avoid contracting the coronavirus. That has helped bring down the jobless rate, because the government doesn’t count people as unemployed unless they are actively seeking jobs.

In Friday’s report, less than half of the 13.6 million unemployed said their layoffs were temporary, down from three-quarters in April.

Brandon Stephens, president of Christmas Decor, is struggling with the uncertainty. The business has 300 franchised outlets across the U.S. that are mostly landscape and pest control companies but turn to setting up lights and decorations for Christmas, Halloween and other holidays in the colder months. That switch typically enables the franchisees to save 3,000 jobs.

Stephens said he is seeing a big increase in interest in holiday decorations from consumers. But businesses are much more cautious about committing to big holiday displays.

“The challenge with our business is we don’t know if we’re screwed until the last couple of weeks of the year,” he said.

Roughly 29 million Americans are receiving state unemployment benefits but are no longer drawing an extra $600 a week in federal jobless aid, which expired more than a month ago. The Trump administration has set up a program to provide some of the unemployed with $300 a week. But the new rules will make many ineligible.

One consequence of the crisis is that rising stress and anxiety are evident at therapists’ offices and mental health hotlines around the country.

“Not many days go by where I don’t have a couple where one partner or both are not working or furloughed,” said Todd Creager, a therapist in Southern California who treats mostly middle- to upper-middle-class adults.

CRMC Nurse Dies From COVID-19 After 46 Days in Hospital