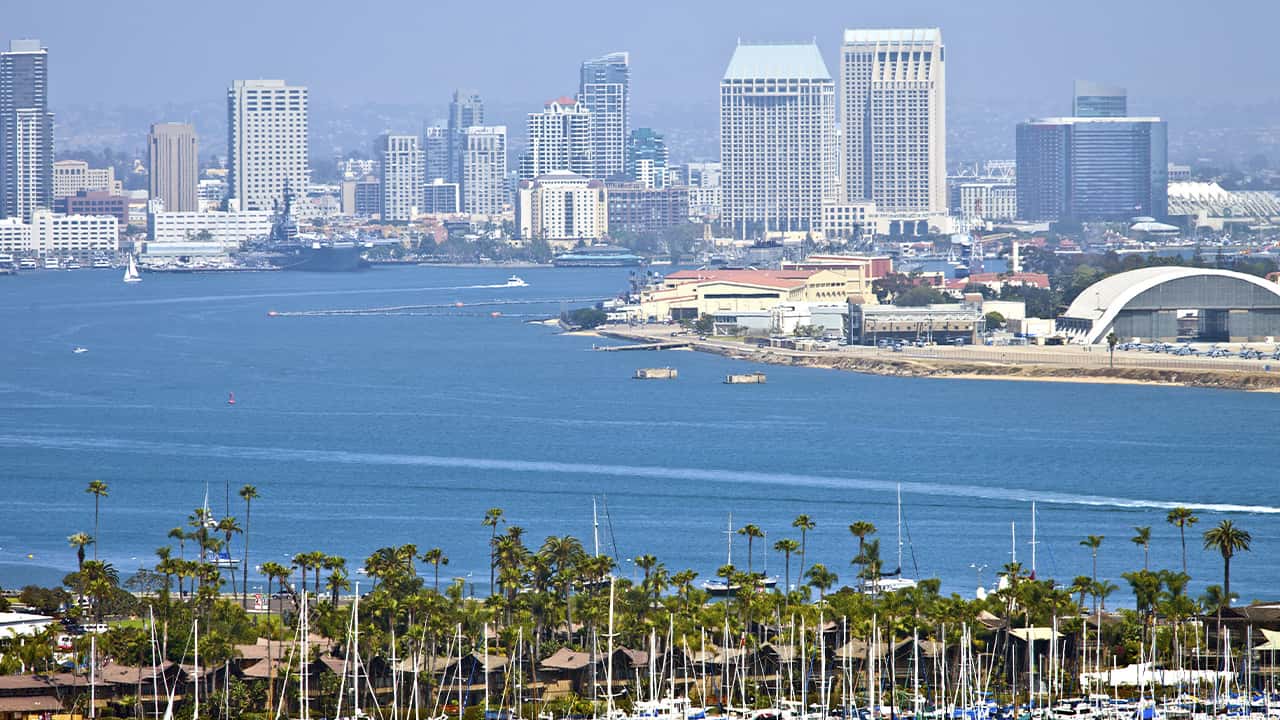 SAN DIEGO — With blistering temperatures predicted for California’s Labor Day weekend, people in San Diego can escape the heat by catching a flick in an air-conditioned movie theater or eating inside a restaurant — options most in the state don’t have because of restrictions to control the coronavirus.

Among California’s 10 most populous counties, San Diego is the only one with virus cases low enough to meet state standards for reopening theaters, museums and gyms, and resuming indoor dining — all with limited capacity to provide for physical distancing.

Among California’s 10 most populous counties, San Diego is the only one with virus cases low enough to meet state standards for reopening theaters, museums and gyms, and resuming indoor dining — all with limited capacity to provide for physical distancing.

And while some California coastal cities and counties are closing beaches or restricting activities to control crowds and potential virus outbreaks this weekend, the city of San Diego’s beaches and most others in the county are fully open.

SeaWorld, a San Diego landmark, also is reopening several of its indoor exhibits this weekend, such as the Penguin Encounter, Shark Encounter and Turtle Reef.

“Let’s not blow this opportunity,” he said. “Let’s work together to control our own destiny and show the rest of the state how it’s done.”

Things Are Even Better in San Diego County

California, the nation’s most populous state, has had more than 717,000 confirmed virus cases, and the third-most deaths with more than 13,000. However, cases and hospitalizations have dropped precipitously since peaking in mid-July. In the last week, daily cases have fallen to an average of around 4,800, about half what they were at the peak, and the rate of positive tests has dropped to 4.4%.

Things are even better in San Diego County, where the rate of positive tests has dropped to 3.8%. San Diego — with a population of 3.3 million that in California is second only to Los Angeles — and San Francisco are the only large urban counties in the second-highest level of the state’s new, four-tiered, color-coded system for reopening businesses.

Every other county in Southern California and most others among the state’s 58 remain in the highest tier, which is purple, meaning many more nonessential businesses are closed, there’s no indoor dining and schools can’t return to in-person teaching unless they obtain a waiver to do so.

San Diego is now poised to have the option to allow all schools to reopen for classroom learning with restrictions, though San Diego Unified School District so far has not announced plans to do that.

Public health experts say a number of factors have helped San Diego County drop its numbers after they shot up along with the rest of the state’s in early summer. San Diego is the rare major population center in California where Republicans and Democrats share power, and they have largely cooperated on issues related to the pandemic.

Many of the Community Outbreaks Have Been Concentrated in Restaurants

Local officials were quick to ramp up case investigations and contact tracing when the county started lagging behind its goals. More than 95% of cases now are investigated within 24 hours of being reported, and people who may have been exposed are contacted. That far exceeds what the state had set as a benchmark of 70%.

Many of the community outbreaks have been concentrated in restaurants. The county has declined to name the establishments for fear it will deter businesses from reporting cases. But Oren said just naming the kind of setting helps.

The county is among the few to report community outbreaks, which it defines as an outbreak in a single setting involving people from at least three different households. This has helped the county pinpoint where to beef up enforcement or education and let’s the public also see where there are risks, said Eyal Oren, an epidemiologist at San Diego State University.

Many of the community outbreaks have been concentrated in restaurants. The county has declined to name the establishments for fear it will deter businesses from reporting cases. But Oren said just naming the kind of setting helps.

“It highlights that for the public there are risks associated with these kinds of venues and makes people aware of that so they can take proper precautions,” he said.

Kelsey Muma, the marketing manager for the LOT, a chain of luxury cinemas that feature chic restaurants, said San Diego has shown that people can return to enjoying things safely. Her company’s two San Diego theaters opened this week and can operate at 25% capacity under the rules.

She said patrons were eager to return to an American pastime of catching a movie at a theater.

“They’re so excited to finally be able to sit, smell the popcorn and feel the noise of the theater, which is a much more immersive experience than at home where there are distractions,” Muma said. “We just feel very lucky to be able to be open.”