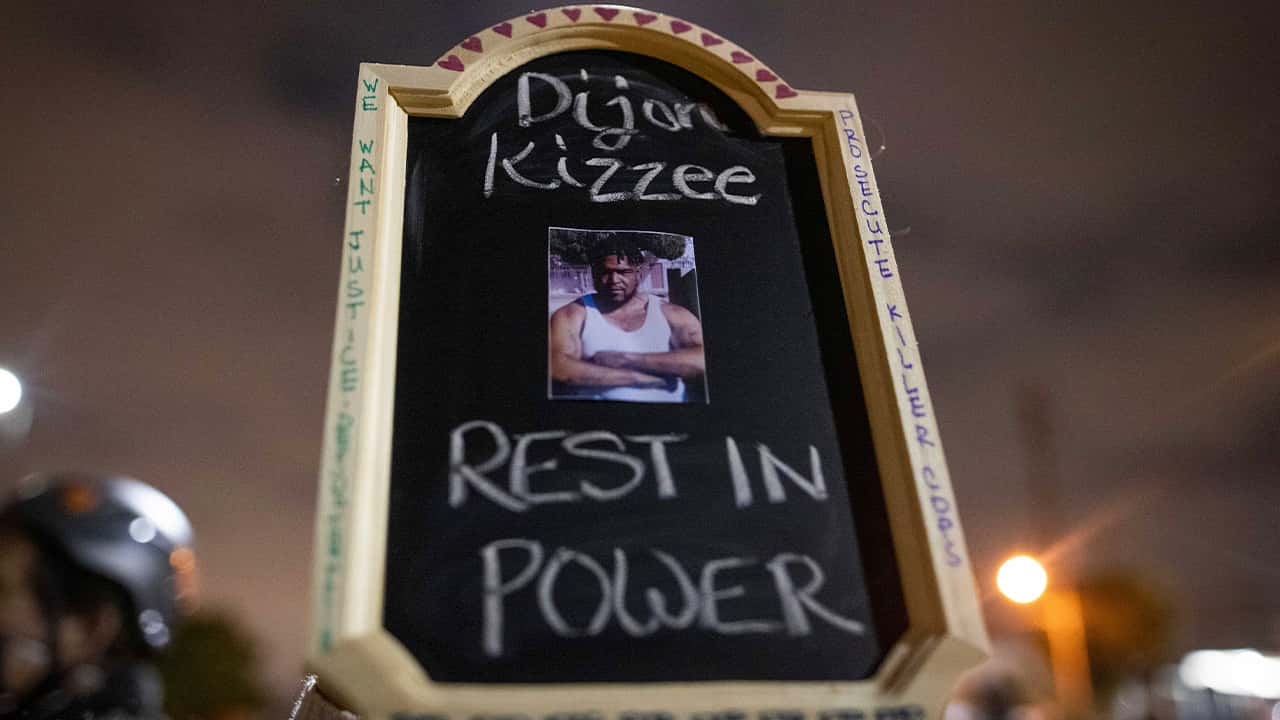 LOS ANGELES — A grainy video posted Wednesday shows the fatal shooting of a Black man by Los Angeles County sheriff’s deputies after he was stopped on a bicycle for a traffic violation, but the video does not confirm the police allegation that he “made a motion” for a gun.

Dijon Kizzee was shot and killed Monday afternoon in South Los Angeles. The video, obtained by the Los Angeles Times, shows the 29-year-old Kizzee scuffling with a deputy on a sidewalk. Kizzee broke free, stumbled and fell to the ground and two deputies opened fire.

Police have said a gun fell out when Kizzee dropped a jacket as he fell to the ground and he “made a motion” for the weapon — prompting deputies to open fire. But the video does not confirm whether that happened because a fence obstructs the view at that period in the sequence of events.

Kizzee’s death came after another police shooting victim, Jacob Blake, was hit in the back and paralyzed last month in his hometown of Kenosha, Wisconsin. Blake’s shooting prompted large and violent protests in Kenosha. There have been two much smaller, peaceful protests in Los Angeles for Kizzee.

The shootings of Kizzee and Blake show the need for a national standard on police use of force to prevent more killings of Black men and increase accountability and transparency, said Lynda Williams, president of the National Organization of Black Law Enforcement Executives.

“It just hurts to see this recurring over and over,” she said. “It’s just incredulous to think that a bicycle stop has led to deadly force.”

The Sheriff’s Department Provided No New Information About the Case

“We stand with Dijon’s family in demanding justice and transparency into this despicable and tragic killing perpetrated by Los Angeles County officers,” Crump said in a statement. “When officers shoot first and ask questions later, precious lives are lost and police lose credibility and trust from those they are sworn to protect.”

There was no immediate response Wednesday evening to a request for comment about the video sent to an email address listed as Crump’s media contact.

The sheriff’s department provided no new information about the case on Wednesday but a department statement Tuesday said deputies tried to stop Kizzee for riding his bicycle in violation of vehicle codes, without specifying the alleged infraction.

Statistics nationwide show that “biking while Black” can result in disproportionate citations for people of color. A 2015 Tampa Bay Times investigation revealing that eight out of 10 bicyclists ticketed by Tampa police were Black prompted a federal probe.

A Chicago Tribune review in 2017 found that more than twice as many citations were written in African-American communities than in white or Latino areas. “It is not something with which those who are involved in criminal justice reform and representing clients are unfamiliar,” he said.

The Los Angeles County Sheriff’s Department did not provide statistics regarding bicycle stops and citations on Wednesday and the Los Angeles Police Department’s figures do not break down vehicle stops by category.

Donny Joubert, vice president of the Watts Gang Task Force group in Los Angeles that was created to reduce gang violence and improve community relations with police, said residents on bicycles in communities of color are regularly stopped for supposed vehicle violations.

But he said white cyclists in wealthy neighborhoods rarely face the same treatment.

“They’ll pull you over on a skateboard,” Joubert said. “It means our kids can’t even ride a bike in their community without being blamed for something or being accused of something.”

The sheriff’s department has said Kizzee got off his bike and ran and the deputies briefly lost sight of him. The video shows a police SUV stop in a street. A deputy gets out, runs around a parked car and appears to try to grab Kizzee as he walks down the sidewalk. They tussle, standing, and move down the street together for several seconds. Kissee appears to throw a punch. Police have said he hit the deputy in the face but that’s not clear from the video.

The video then shows Kissee breaking free, stumbling and falling to the ground. A second deputy arrives. Within about 2 seconds, they repeatedly open fire.

He Was an Energetic Man Who Loved Go-Karts, Cars and Music

Police have not said how many shots the deputies fired. The video obtained by the Times does not have audio, but another video from a front door camera that does not show the shooting captured the sound of about 15 rounds fired.

Kizzee’s relatives have described him as devoted to his late mother and 18-year-old brother. They said he was an energetic man who loved go-karts, cars and music and that he was working toward becoming a plumber.

The Los Angeles Sheriff’s Department, the largest in the nation, does not have body cameras for deputies, though that soon will change. The county Board of Supervisors on Tuesday approved funding and the first group of deputies will be equipped with cameras next month.

Sheriff Alex Villanueva offered his condolences to Kizzee’s relatives on Tuesday, who he said includes a cousin who is a Sheriff’s Department member.

Villanueva did not offer any updates on the investigation during a live social media event on Wednesday.

He did not respond to repeated questions about the fatal shooting posted by The Associated Press during the event.

Eli Akira Kaufman, executive director of the Los Angeles County Bicycle Coalition, said his organization is trying to redefine street safety beyond the primary concern of many cyclists of good bicycle lanes for protection from cars.

“Bicycling, at the end of the day, is the freedom to move freely — without fear for your life,” he said.

Approvals for New Oil and Gas Wells up in California