New Focus for Campaign: Will Biden or Trump Keep You Safer? 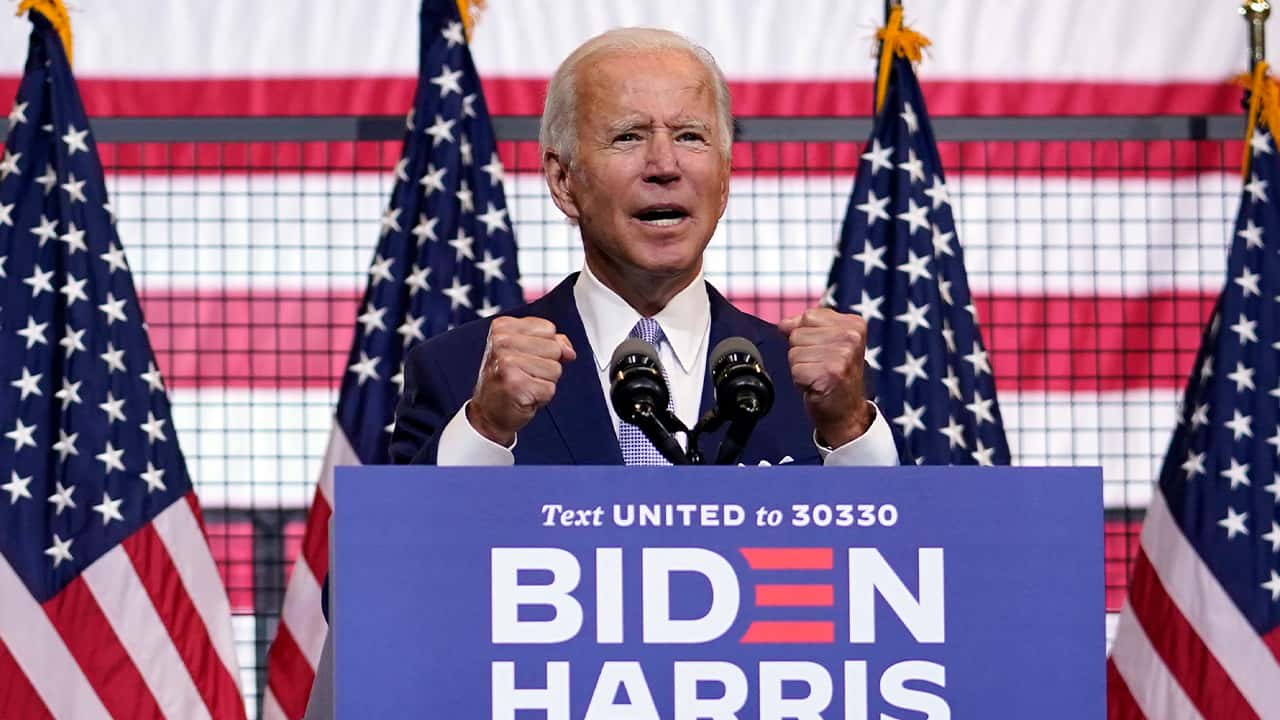 PITTSBURGH — The battle over who can keep Americans safe after recent deadly protests has emerged as the sharpest dividing line for the presidential campaign’s final weeks, with Joe Biden on Monday condemning the violence and President Donald Trump defending a supporter accused of fatally shooting two men.

“That was an interesting situation. He was trying to get away from them, I guess, it looks like, and he fell. And then they very violently attacked him. … He was in very big trouble. He would have been — you probably would’ve been killed.” — President Donald Trump

While the president blamed Biden, his Democratic foe, for siding with “anarchists,” Biden, in his most direct attacks yet, accused Trump of causing the divisions that have ignited the violence. He delivered an uncharacteristically blistering speech and distanced himself from radical forces involved in altercations.

Biden said of Trump: “He doesn’t want to shed light, he wants to generate heat, and he’s stoking violence in our cities. He can’t stop the violence because for years he’s fomented it.”

Trump blames radical troublemakers whom he says are stirred up and backed by Biden. But when he was asked about one of his own supporters who was charged with killing two men during the mayhem in Kenosha, Wisconsin, he declined to denounce the killings and suggested that 17-year-old Kyle Rittenhouse was acting in self-defense.

After a confrontation in which he fatally shot one man, police say, Rittenhouse fell while being chased by people trying to disarm him.

“That was an interesting situation,” said Trump. “He was trying to get away from them, I guess, it looks like, and he fell. And then they very violently attacked him. … He was in very big trouble. He would have been — you probably would’ve been killed.”

Trump’s refusal to condemn the shootings could add to tensions in Kenosha when he visits Tuesday. He’s going despite pleas from Wisconsin’s Democratic governor to stay away for fears of sparking further tumult.

In Kenosha, the National Guard has been deployed to quell demonstrations in response to the police shooting of Jacob Blake, a Black man.

Trump said his appearance could “increase enthusiasm” in Wisconsin, which is a hotly contested battleground state in the presidential race.

In a statement after Trump’s news conference comments, he said: “Today, I traveled to Pittsburgh to explain how the president was making America less safe — on COVID, on the economy, on crime, on racism, on violence — and reiterated my clear message that violence is not the answer to any of these problems. …

“Tonight, the president declined to rebuke violence. He wouldn’t even repudiate one of his supporters who is charged with murder because of his attacks on others. He is too weak, too scared of the hatred he has stirred to put an end to it.”

In Pittsburgh, the former vice president also tried to refocus the race on what has been its defining theme — Trump’s handling of the COVID-19 pandemic that has left more than 180,000 Americans dead — after a multi-day onslaught by the president’s team to make the campaign about the violence rattling American cities. 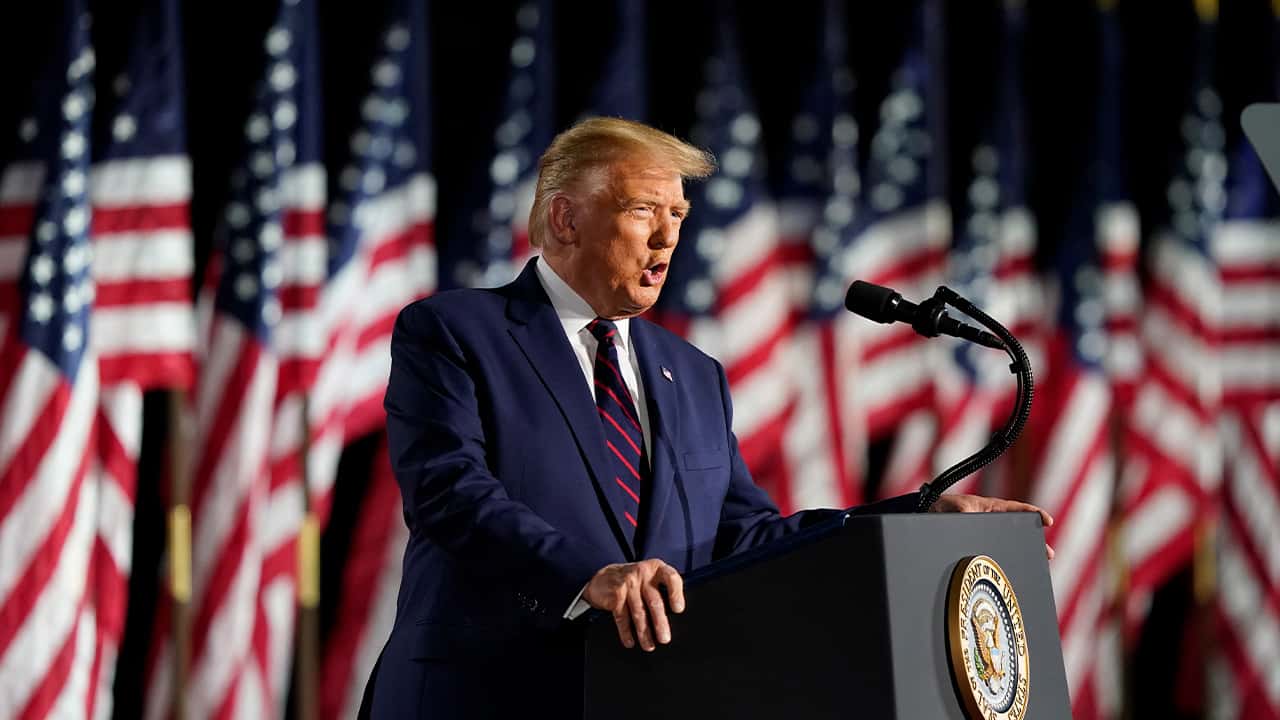 President Donald Trump speaks from the South Lawn of the White House on the fourth day of the Republican National Convention, Thursday, Aug. 27, 2020, in Washington. (AP Photo/Alex Brandon)

Biden himself has largely remained near his home in Delaware to prevent the spread of the coronavirus, but he stepped out in a new phase of his campaign on Monday, making a speech in Pittsburgh and a brief stop at a local firehouse.

Trump and his campaign team believe that the more the national discourse is about anything other than the virus, the better it is for the president. They have seized upon the recent unrest in Portland, Oregon — where a Trump supporter was shot and killed — and Kenosha, leaning hard into a defense of law and order while suggesting that Biden is powerless to stop extremists.

Set aside Monday were his lofty appeals about the “soul of the nation,” a staple of his usual stump speech, replaced by an urgent call for action and and his fierce accusation that Trump was a “toxic presence in this nation for four years” who was “poisoning the values this nation has always held dear, poisoning our very democracy.”

The president and his team continued to hammer away on what they believe is a powerful electoral argument, contending that Biden is in thrall to leftist forces and emphasizing chaotic protest images they believe could send worried suburban and senior voters back to Trump’s column.

“Just watched what Biden had to say,” Trump tweeted soon after the former vice president concluded his remarks in Pittsburgh. “To me, he’s blaming the Police far more than he’s blaming the Rioters, Anarchists, Agitators, and Looters, which he could never blame or he would lose the Radical Left Bernie supports!”

Biden Didn’t Just Play Defense, He Went on the Attack

Biden has been pushed by worried Democrats — including some voices inside his own campaign — to deal with the violence head-on and at greater length, though he had previously condemned it. With Trump pounding the issue in his convention speech, which was then followed by more bloodshed over the weekend, many in Biden’s party, still shell-shocked by 2016, urged the former vice president to get ahead of the rare issue that has broken through the national focus on the pandemic.

“It’s lawlessness, plain and simple. And those who do it should be prosecuted.” — Joe Biden

But Biden didn’t just play defense, he went on the attack.

Following up his Democratic convention address, in which he didn’t mention Trump’s name, Biden on Monday invoked Trump’s name 32 times, directly assailing the president in remarks that seemed intended to silence worries in his party and the Beltway’s chattering class. He pulled no punches about the violence.

“It’s lawlessness, plain and simple. And those who do it should be prosecuted,” Biden said. And he leaned on his own 47-year career in politics to defend himself against Republican attacks.

“You know me. You know my heart. You know my story, my family’s story. Ask yourself: Do I look like a radical socialist with a soft spot for rioters? Really?”

He declared that even as Trump is “trying to scare America,” what’s really causing the nation’s fear is Trump’s own failures.

The Setting for Biden’s Speech Was No Accident

For months, Trump has tried to distract from the pandemic, and at times he seemed to receive slight positive bumps in support when touting the possible economic recovery. But other attempts to change the narrative with cultural wedge issues fell flat, including a defense of Confederate monuments, and polling suggested that Trump was far out of step with the Black Lives Matter movement, which enjoyed wide public support.

Though a law and order push backfired when the president cleared Lafayette Square, near the White House, of peaceful protesters in early June, the Trump campaign has seized on the violence as a means to drive up Biden’s negatives and bring home disenchanted suburban voters.

The former vice president’s speech Monday appeared to jump-start the general election campaign a week ahead of its normal Labor Day kickoff, as both Biden and his running mate, Kamala Harris, will begin venturing out despite the pandemic. Biden, who may make his own visit to Wisconsin this week, has missed the glad-handing of a traditional campaign and managed to have a brief moment of retail politics when he delivered pizzas to Pittsburgh firefighters.

The setting for Biden’s speech was no accident: Pennsylvania, his native state, is a vital battleground with both candidates competing for its working-class voters. Trump, whose campaign is focusing on the state’s rural counties, eked out a 44,000-vote win in 2016 but Biden, who is running strong in the Pittsburgh and Philadelphia suburbs, also made certain Monday to make a pitch on an issue of local interest.

“I am not banning fracking, no matter how many times Donald Trump lies about me,” he said.