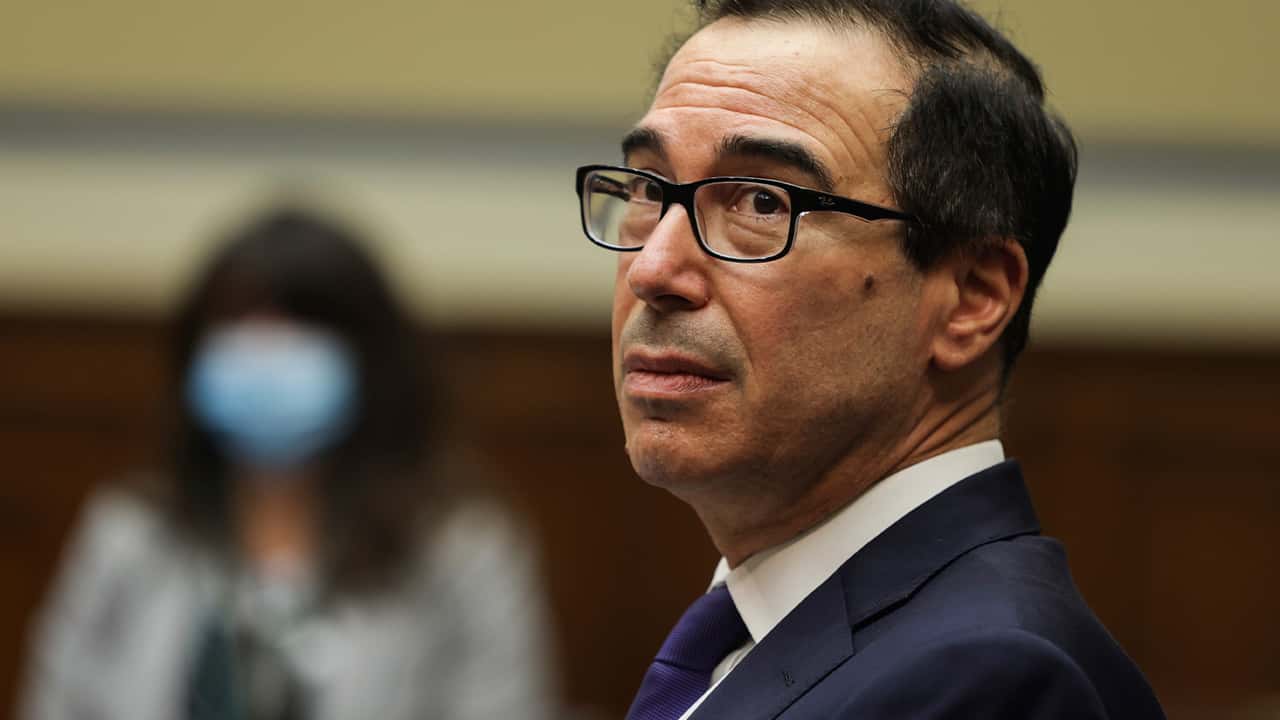 WASHINGTON — Pressed by Democrats to quickly negotiate a new coronavirus relief package, Treasury Secretary Steven Mnuchin said Tuesday the administration remains willing to work on a bipartisan agreement to help small businesses, the unemployed, children and schools. Democratic leaders in Congress are holding it up with hardened positions, he said.

“Let’s move forward on a bipartisan basis on points we can agree upon. The president and I want to move forward.” — Treasury Secretary Steven Mnuchin

“Let’s move forward on a bipartisan basis on points we can agree upon,” Mnuchin urged at a hearing by the House Select Subcommittee on the Coronavirus Crisis. “The president and I want to move forward.”

Mnuchin made the case that the economy’s recovery has strengthened in recent weeks, citing improved consumer spending, growth in manufacturing and a rebounding housing market. It’s the failure of some states to reopen activity that is holding back the economy, he said.

But Democrats insisted that dire economic conditions persist for many. “Millions of Americans are now facing eviction, debt and hunger,” said the panel’s chairman, Rep. James Clyburn, D-S.C. “As the pandemic drags on, states, cities and businesses are warning that more layoffs may be coming.”

The subcommittee’s Democratic staff, meanwhile, said it has identified lapses pointing to possible fraud and abuse in a signature piece of the administration’s relief effort, the $660 billion-plus small business loan program — including more than $1 billion awarded to businesses that received multiple loans.

The staff investigators said in a report that a lack of government oversight and accountability for the program “may have led to billions of dollars being diverted to fraud, waste and abuse, rather than reaching small businesses truly in need.”

With bipartisan agreement, Congress enacted an unprecedented $2.3 trillion pandemic rescue package in March. Now the Trump administration and top congressional Democrats have been in a monthslong stalemate over new relief legislation, with the two sides trillions of dollars apart. Lawmakers left Washington for the August recess without an agreement.

Mnuchin and Democrats Disagree on State of the Economy

An estimated 27 million people are receiving some form of unemployment benefits, according to the Labor Department, though the figure may be inflated by double-counting by states.

Mnuchin identified additional spending on aid to small businesses as the area where Democrats and Republicans are most likely to agree. In sometimes sharp exchanges, he and Democrats on the panel disagreed over the state of the economy and traded blame for the impasse over new rescue legislation.

Mnuchin pinned the blame on a refusal to compromise by House Speaker Nancy Pelosi and Senate Democratic leader Chuck Schumer. While touting the economy’s partial recovery, he acknowledged that “we have more work to do.”

Still, Mnuchin showed some openness to negotiating and even agreed, under prodding from Rep. Maxine Waters, D-Calif., to phone Pelosi right after the hearing.

He said he doesn’t support the Democrats’ position for $2.2 trillion in spending in the next package, which contrasts with Republicans’ stance of $1 trillion. He added, however, “What’s more important is … getting money to American workers, American families, kids. There are tremendous areas of agreement, and that’s what we should be doing right away.”

“I would publicly say I am willing to sit down at the negotiating table with the speaker with no conditions whatsoever any time,” Mnuchin said.

Pelosi: Administration Doesn’t Understand the ‘Gravity of the Problem’

Pelosi this week said the talks faltered because administration officials “do not understand the gravity of the problem” facing the country.

Under questioning from Democrats on the panel, Mnuchin again denied any involvement in the hiring of new Postmaster General Louis DeJoy.

“I had no specific conversations with him about that job until the (search) committee updated me that he was one of the finalists. I was quite surprised when I found out that he was a candidate. Again I had no involvement in that process whatsoever.’’ — Treasury Secretary Steven Mnuchin

Democrats are looking into how DeJoy was hired as they scrutinize a series of operational changes at the Postal Service that have resulted in widespread mail delays and fears that the agency will not be able to handle an expected surge in mail-in ballots this fall as a result of the coronavirus pandemic.

Democrats also want to learn more about Mnuchin’s role. The Treasury chief met with members of the Postal Service Board of Governors while the selection of the new postmaster general was underway.

Mnuchin said he knew DeJoy, a former supply chain CEO and a top Republican donor, from the 2016 Trump campaign. But he said he had not seen or spoken to DeJoy before he was hired to lead the Postal Service this spring.

“I had no specific conversations with him about that job until the (search) committee updated me that he was one of the finalists,’’ Mnuchin said. “I was quite surprised when I found out that he was a candidate. Again I had no involvement in that process whatsoever.’’

The Small Business Administration’s Paycheck Protection Program was a key piece of the government’s economic aid program responding to the pandemic. The nation’s small businesses received a gut punch in the spring as huge swaths of the economy were shut down, millions lost jobs and consumers curtailed spending.

Economists generally credit the small business program with helping prevent the job market meltdown from becoming worse. The loans are forgivable if businesses use the money to keep employees on the payroll or rehire workers who have been laid off.

Spokespersons for Treasury and the SBA didn’t immediately respond to requests for comment on the report.

Fresno Unified Parents Plan Rally to Protest Closed Schools: ‘We Should Have A Choice’