DE PERE, Wis. — Alexis Arnold says she’s sympathetic toward protesters who have peacefully fought racial injustice this summer. But as some demonstrations spiral into violence, her anxiety is building.

“Why are we so broken right now?” the 44-year-old art gallery owner wondered.

“The public just needs something to make them feel comfortable and safe again. I almost rather see Trump stay and try to resolve it rather than bring somebody in new.” — Alexis Arnold

The uncertainty is drawing her to whatever stability President Donald Trump can offer. He has spent weeks pushing questions of safety and security to the forefront of the presidential campaign. And there are signs some Wisconsin voters are listening, after protests have sometimes become violent in Kenosha, Wisconsin, where a white police officer shot a Black man, Jacob Blake, seven times, paralyzing him.

“The public just needs something to make them feel comfortable and safe again,” said Arnold, who is white, has voted for Democrats in the past and is raising a biracial daughter. “I almost rather see Trump stay and try to resolve it rather than bring somebody in new.”

That sentiment could prove decisive in Wisconsin, a state that put Trump in the White House in 2016 after he carried it by less than 1 percentage point. The president has already used dark and misleading warnings of destruction in American streets following violence in Portland, Oregon, and is now seizing on unrest in Kenosha, where he’ll travel on Tuesday.

His Democratic rival, Joe Biden, has condemned violence and focused more on the victims of police brutality.

But the images of unrest in Kenosha — of protesters clashing with police, shattered windows and a teenager carrying an AR-15 style gun in the streets — are intensifying the partisan divide in Wisconsin. In interviews with dozens of voters in Green Bay and its suburbs, Democrats saw racism and fear-mongering in Trump’s messages, part of a ploy to change the subject from the pandemic. Republicans, even those who admittedly cringed at Trump’s style on other issues, were unwaveringly supportive.

And some of the rare voters unsure of their choice said they felt drawn to Trump in this moment, a warning sign for Biden, who has tried to make the election a clear referendum on Trump, his leadership and his handling of the coronavirus.

As part of that strategy, Biden has all but shunned in-person campaigning and generally kept a lower profile. (His campaign says that is due to change.) That approach has left some voters who haven’t ruled out Trump hazy on where Biden stands on race and criminal justice, a vacuum quickly filled with misinformation.

“It was out there that he would get rid of the police,” said Mike Guerts, referring to an often repeated falsehood about Biden’s position.

Guerts, a wavering Trump voter, says a friend has inundated his phone with pro-Trump posts. The 55-year-old mail worker from Madison, who was in town visiting his father, said he knows not everything his friend sends is true but he doesn’t yet know enough to feel comfortable with Biden.

“I’ve been a lifelong Republican. I’m torn,” he said, noting police brutality is a pressing problem. “But that does not excuse the lawlessness.”

There is far less ambiguity among Trump stalwarts. Many were quick to lump all protesters and Democrats together as “socialists.” Some disputed there is systemic racism in the U.S. and argued that Black Americans often provoke police into using force. And they rarely mention Kyle Rittenhouse, the white teenager who is charged with shooting three people, killing two, in Kenosha.

Instead, they saw Democrats and their celebrity allies as stoking the unrest. 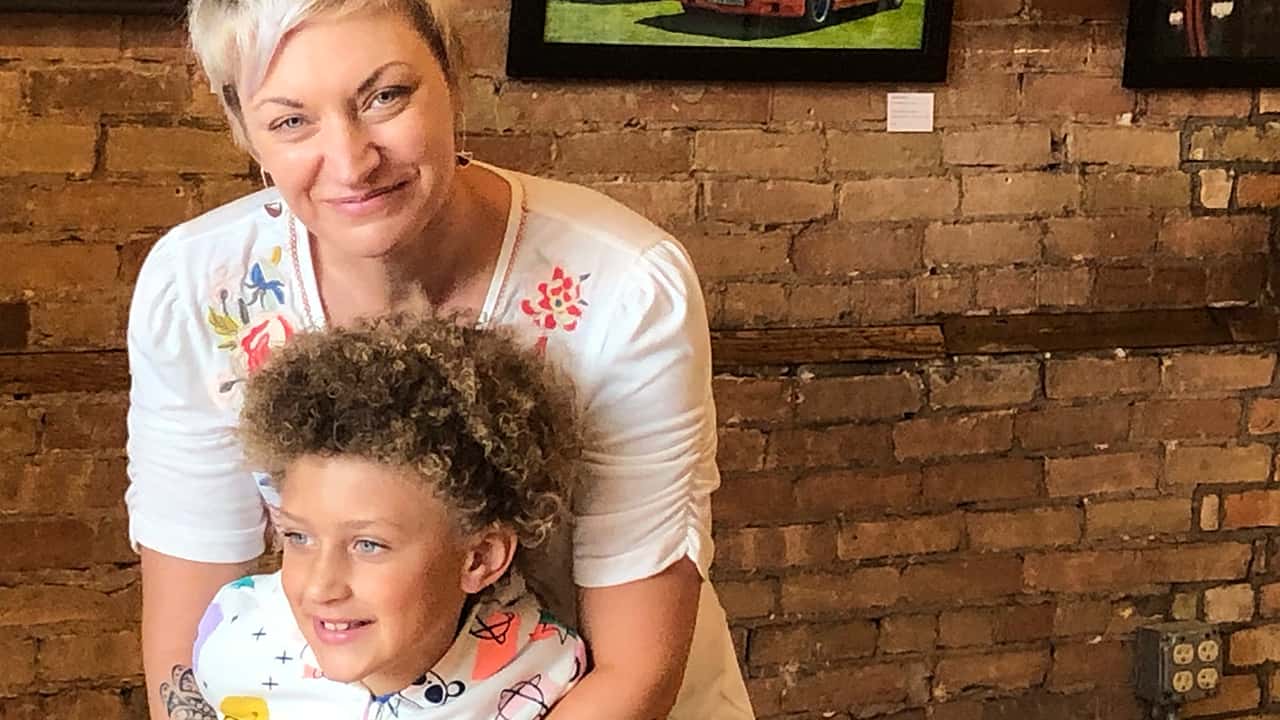 This Friday, April 28, 2020 photo shows Alexis Arnold, 44, a gallery and gift shop owner in De Pere, Wis., with her 6-year-old daughter Jade Arnold. Arnold has watched and worried all summer as protests over racial injustice at times spiraled to violence. First, she called friends in Portland for firsthand accounts. After it happened in Kenosha, a place not unlike the suburb where she’s raising her daughter, she wondered out loud, “Why are we so broken right now?” (AP Photo/Kathleen Hennessey)

“They haven’t done anything to stop it,” said Rick Demro, a 60-year-old, retired commander with Green Bay police department. “You don’t see them back up law enforcement. They’re quick to cast judgment before they facts come out. I think all that does is promote the rioting instead of trying to quell it. Part of me says, it’s to help them for the campaign purposes.”

Demro said he’s particularly angered by professional athletes and organizations speaking out against police brutality — including his beloved Green Bay Packers. He hasn’t missed a home game since the early 1980s, and he waited for 30 years to get his season tickets. But this week, he talked to his wife about giving them up in protest. (She refused, he said, because she wants to pass them down to their children.)

Demro was among the Trump supporters who said they did see problem in policing. When he watched the video of a Minneapolis police officer pinning George Floyd to the ground until he stopped moving, the May incident that triggered a new, broadly supported movement for racial justice, he said he knew it was “wrong.”

But there’s evidence to suggest that events in the months since have taken a toll on public support for protesters in the state.

A Marquette University Law School survey found support for the protests had fallen 13 percentage points from June to August and is now even with disapproval. The survey of Wisconsin residents conducted before the shootings in Kenosha found that support fell everywhere except the city of Milwaukee, including the suburbs, exurbs and large towns, where Trump and Biden are vying for supporters.

To win Wisconsin, Trump must run up the score in the conservative-leaning suburbs and exurbs across the state, working-class areas where trade union’s allegiance to Democrats has faded and the pull of cultural issues has grown. While he dominated in Green Bay’s Brown County in 2016 — winning by 11 percentage points — the area supported a Democrat-backed Supreme Court justice this spring, in a surprising surge of Democratic turnout.

Driving His Supporters To the Polls, While Overcoming Barriers To Voting in the Pandemic, Is Critical for Biden

They were Democrats like Michelle Yurek, a fourth-grade teacher who was preparing to go back to teach in a classroom last week, as Trump told the Republican National Convention that “no one will be safe in Biden’s America.”

Leake says she didn’t vote in 2016 because she’s disillusioned with what she see as politicians’ unfulfilled promises. Biden hasn’t given her a reason to change course, she said.

“I don’t think we’re safe in Trump’s America,” Yurek said, from her home in a neat subdivision on the edge of Green Bay where she lives with her husband and three children. “I think he’s caused a lot of the division.”

Driving his supporters to the polls, while overcoming barriers to voting in the pandemic, is critical for Biden. That means winning over voters like Brittaney Leake, a 27-year-old support staff worker at a group home and a mom of three, with another on the way.

Leake says she didn’t vote in 2016 because she’s disillusioned with what she see as politicians’ unfulfilled promises. Biden hasn’t given her a reason to change course, she said.

“Just because he’s a Democrat doesn’t mean he has my vote,” Leake said. “If I can’t specifically see what he’s going to do for a change, I’m not going to vote for him. … There has to be action.”

Arnold, the gallery owner, voted for Democrat Hillary Clinton four years ago. But she hasn’t been unhappy with Trump’s record. She thinks he’s trying to look out for businesses like hers and she’s heard positive things about his criminal justice reform bill.

It seems daunting now to switch leaders at a time when she’s everyone is “stretched so thin.” She’s still mulling over her choice, wishing she could hear more from both candidates for a plan for a reset. “I think we’re all just kind of worn out. And we just want to get back to somewhat of a normal life.”