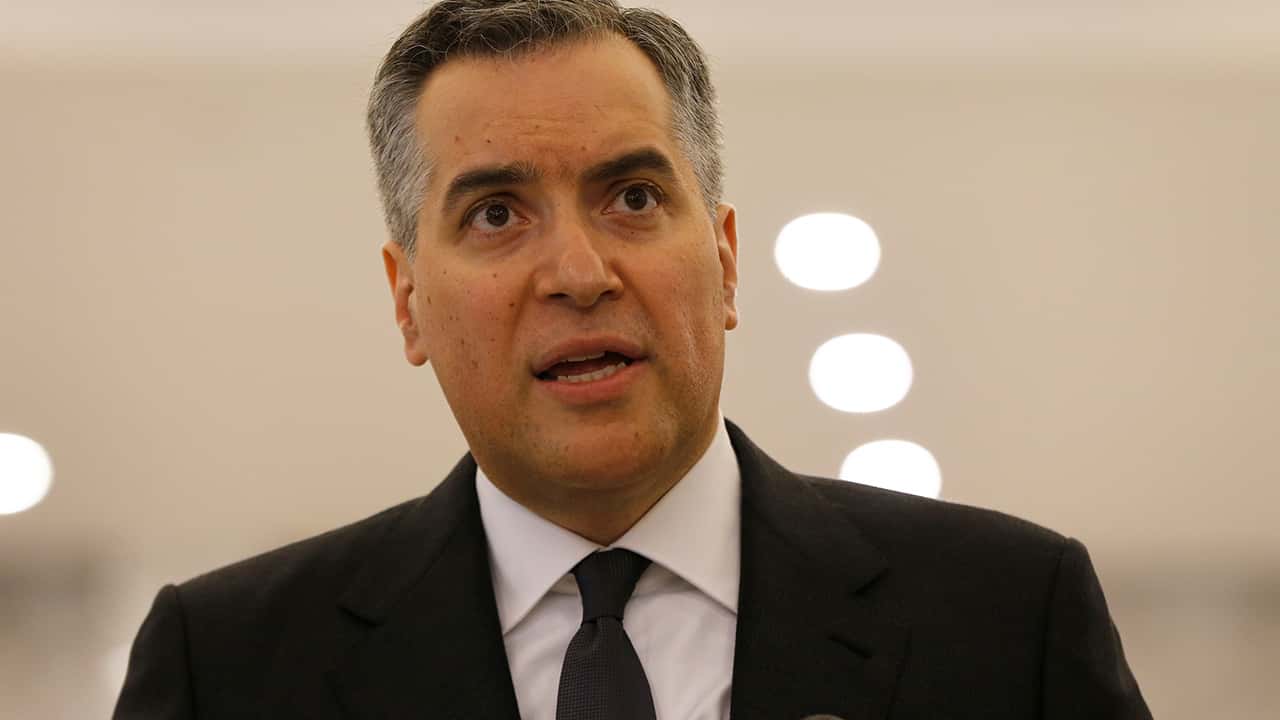 BEIRUT — Lebanon’s prime minister-designate on Monday called for a new government to be formed “in record time,” pledging to speed up the investigation into the massive Beirut explosion and implement reforms after winning the backing of major parties in the crisis-hit country.

Mustapha Adib, Lebanon’s ambassador to Germany, spoke to reporters shortly after he was appointed by the president to form a new government, after he secured 90 votes among the legislators in the 128-member parliament.

“There are no words to express this frightening scene.” — Mustapha Adib, Lebanon’s ambassador to Germany

The breakthrough came hours before French President Emmanuel Macron was due to arrive for a two day-visit, during which he is expected to press Lebanese officials to formulate a new political pact to lift the country out of its multiple crises. At least 190 people died and 6,000 were injured in the Aug. 4 blast, which devastated the city’s port and caused widespread damage to residential and commercial areas in the capital.

The government resigned less than a week after the blast, which was caused by the ignition of nearly 3,000 tons of ammonium nitrate that had been stored for six years in a port warehouse.

In his first move after being appointed, Adib visited the historic neighborhood of Gemmayzeh, one of the areas hardest-hit by the explosion, and chatted with residents — something which no other Lebanese politician has done.

“There are no words to express this frightening scene,” Adib said. The reaction was mixed, with some chanting “Revolution, revolution!” and demanding to know how he can be an independent prime minister when he was chosen by political parties.

“We want the truth, and if you are not going to work for the truth, then we don’t want any of you,” a man told Adib as the ambassador walked among the people, surrounded by a handful of guards. Civilians carry a victim at the explosion scene that hit the seaport, in Beirut Lebanon, Tuesday, Aug. 4, 2020. Massive explosions rocked downtown Beirut on Tuesday, flattening much of the port, damaging buildings and blowing out windows and doors as a giant mushroom cloud rose above the capital. Witnesses saw many people injured by flying glass and debris. (AP Photo/Hussein Malla)

Adib said he wanted to form a government in record time so that the investigation into the blast can be faster. He later went into his car and sped off, as some chanted “Adib is one of them!” in reference to the ruling class.

Earlier, at the palace, Adib told reporters he will form a Cabinet of experts and will work with parliament to “put the country on track to end the dangerous financial, economic and social drainage.”

“The opportunity in front of our country is narrow, and the mission that I accepted is based on all political groups realizing that,” he said. “Reforms should be carried out immediately through an agreement with the International Monetary Fund,” he added without elaborating.

Macron and other world leaders, as well as the International Monetary Fund, have refused to give assistance to Lebanon before it enacts major reforms. The swift consensus around Adib, a little-known diplomat, signaled a sense of urgency by Lebanon’s traditional politicians to try and contain the rapidly worsening economic and financial crisis and show movement ahead of Macron’s visit.

Former Prime Minister Saad Hariri emerged from his meeting with Aoun on Monday, telling reporters his 18-member bloc had given its backing to Adib. He called for the formation of a government of experts “that implement reforms aimed at restoring the world’s confidence in our economy so we can start to emerge from this crisis.”

Adib, who returned from Germany to Lebanon on Saturday, was the only name to emerge as a favorite for the post of prime minister, who according to Lebanon’s sectarian-based power sharing system has to be a Sunni Muslim. The candidate who gets the most support is asked to form the new Cabinet, but Lebanon’s divided political class has often been bogged down over who holds senior posts and key ministries.

Lebanon has Seen Spike in Coronavirus Infections and Deaths

Adib was named by four former prime ministers, including Hariri, on the eve of Monday’s consultations.

Earlier Sunday, the head of the powerful Hezbollah militant group, Hassan Nasrallah, said his supporters will cooperate and facilitate the formation of a government that would be able to improve economic conditions and undertake major reforms.

Even before the explosion, an unprecedented economic crisis had already sapped the Lebanese currency of more than 80% of its value, driving unemployment, poverty and inflation through the roof.

The Iran-backed militant group, which has a dominant role in Lebanon’s politics, has come under intense criticism and public scrutiny as the country faces multiple devastating crises. Hezbollah and its allies also named Adib.

Even before the explosion, an unprecedented economic crisis had already sapped the Lebanese currency of more than 80% of its value, driving unemployment, poverty and inflation through the roof.

Coronavirus infections and deaths have also spiked, pushing authorities to reintroduce some restrictions on economic and social activities that have largely been ignored amid the slump. And the recent explosion badly damaged the port of Beirut, a main trade channel for the small country, which depends on imports.

Prime Minister Hassan Diab’s government, which was backed by Hezbollah and its allies and lacked the backing of the Sunni community, resigned on Aug. 10, six days after the blast.

Adib, who has been Lebanon’s ambassador to Germany since 2013, served as an advisor to one of Lebanon’s former prime ministers, Najib Mikati. He took part in the committee in charge of writing Lebanon’s new electoral law in 2005 and 2006, and acted as chief of Cabinet in 2011.

The 48-year-old is a native of the northern city of Tripoli, holds a PhD in law and political sciences and had taught in universities in Lebanon and France.