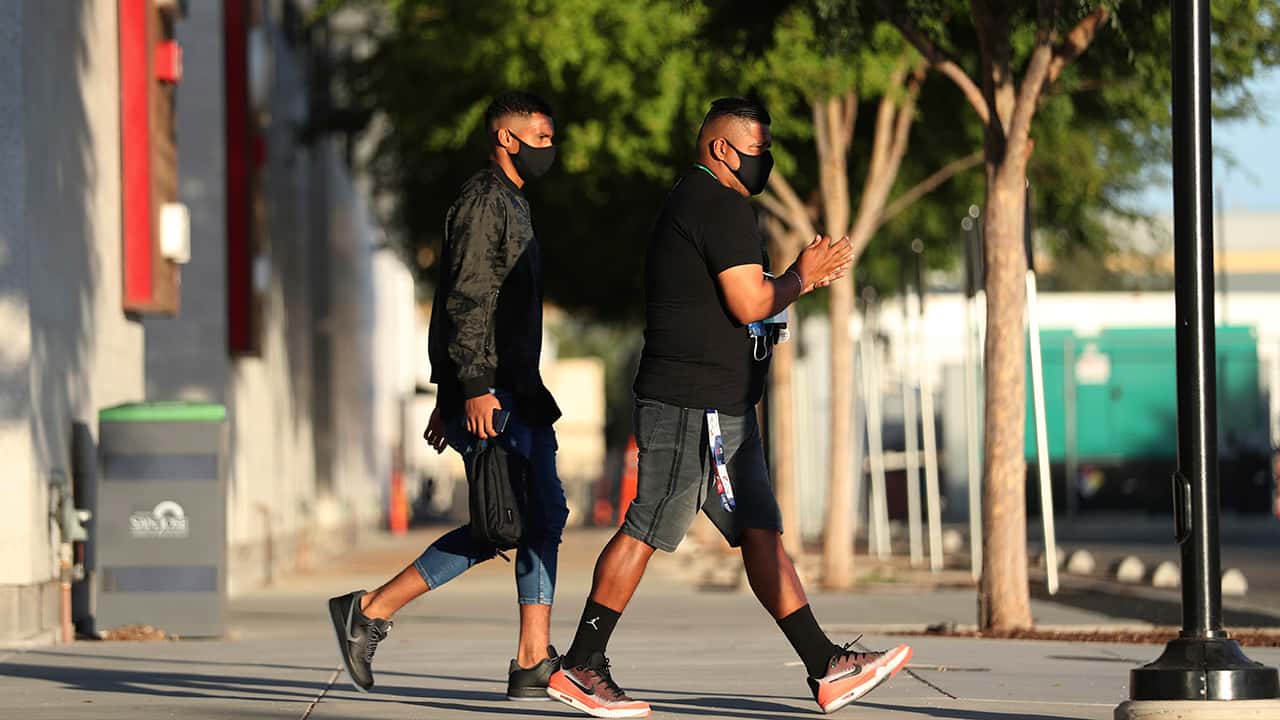 The Milwaukee Bucks showed how far they’re willing to go to get it by opting not to play in their playoff game Wednesday. Two more games were postponed later in the day, the second time this season NBA basketball came to an immediate halt.

Other sports followed, just as they did in March when the season was suspended four months because of the coronavirus pandemic.

Later Thursday, the NBA’s board of governors will meet and likely address whether the playoff games scheduled for the night will be played. The players also will meet separately to decide how long the stoppage lasts.

“The biggest thing that we all understand is if we’re not playing, what are we doing? What are we doing to show and to help what’s going on outside this bubble?” Boston Celtics forward Grant Williams said, shortly before the Bucks were scheduled to tip off their game against the Orlando Magic.

Instead, the Bucks players remained in the locker room, finally emerging hours later to read a statement demanding action from lawmakers and encouraging voting by citizens.

They changed the narrative across the entire sports landscape, putting the focus squarely on social justice reform in protest of the shooting of Jacob Blake, a Black man, by police in Kenosha, Wisconsin, while three of his children in his car looked on.

More Lost NBA Games Would Be Another Punishing Financial Blow

While players and teams from baseball, the WNBA, MLS and tennis sat out their competitions Wednesday night, NBA players and coaches met for nearly three hours in a Disney hotel to determine next steps, including whether the season should continue. They did not come to a consensus, a person with knowledge of the meeting told The Associated Press on condition of anonymity because details weren’t revealed publicly.

The Western & Southern Open won’t be played Thursday, with the U.S. Tennis Association, along with the ATP and WTA Tours, announcing play would be paused after two-time Grand Slam women’s champion Naomi Osaka had already said she wouldn’t play her semifinal match.

“I don’t expect anything drastic to happen with me not playing, but if I can get a conversation started in a majority white sport I consider that a step in the right direction,” Osaka tweeted. “Watching the continued genocide of Black people at the hand of the police is honestly making me sick to my stomach.”

More lost NBA games would be another punishing financial blow in a season in which the league was already headed to losses of hundreds of million of dollars, potentially leading to ramifications that would be felt in future years. An empty court and bench are shown following the scheduled start time of Game 5 of an NBA basketball first-round playoff series, Wednesday, Aug. 26, 2020, in Lake Buena Vista, Fla. All three NBA playoff games scheduled for Wednesday were postponed, with players around the league choosing to boycott in their strongest statement yet against racial injustice. (Kevin C. Cox/Pool Photo via AP)

Before coming to Disney, many NBA players wrestled for weeks about whether it was even right to play, fearing that a return to games would take attention off the deaths of, among others, Breonna Taylor and George Floyd in recent months.

They ultimately decided coming to the bubble and playing televised games would give them the largest platform, though now at least some are wondering if that’s still true. Toronto coach Nick Nurse said he’s heard some players on his team say they were thinking about going home.

His players considered boycotting a playoff game in 2014 after audio tapes featuring former owner Donald Sterling were revealed. He said this time is different because it’s the whole league, rather than one team, weighing the decision.

“I think every team has to decide what they want to do and honestly I hope everyone plays,” Rivers said. “I just think showing the excellence in doing your job, there’s nothing wrong with that, but also fighting for what’s right is important as well.”

It certainly is for the Bucks, who play about 40 miles from Kenosha. Sterling Brown, one of the players to read the statement, has a federal lawsuit pending against the city of Milwaukee alleging he was targeted because he was Black and that his civil rights were violated in January 2018 when officers used a stun gun on him after a parking violation.

And it is for the Raptors, whose team president, Masai Ujiri, had an altercation with an Oracle Arena security guard after Game 6 of last year’s NBA Finals. A video of it released recently appears to show an Alameda County sheriff’s deputy initially shoved Ujiri, who is Black, twice.

They are scheduled to open the second round Thursday against Boston, but Nurse said his players were already having discussions about not playing.

“Boycotting the game has come up for them and again, as a way to try to demand a little more action and I think that’s really what they want,” Nurse said.

“I think there’s enough attention and there’s not quite enough action and I think that’s what I can sense from the discussion. Their disappointment of man, how can we get something to change?”

It probably starts with actions like the Bucks took. Rivers and LeBron James had passionately described the emotions the NBA community felt after seeing the video of Blake’s shooting.

But it’s going to take more than players sitting out NBA games.

“It’s going to take all our institutions to stand up for our values,” former President Barack Obama tweeted, commending the NBA and WNBA players while posting a link to Rivers’ comments from earlier this week.

Neighbors With Hoses Target Fires as Crews Urge Them To Stop

Fed: Rates To Stay Ultra-Low Even After Inflation Picks up