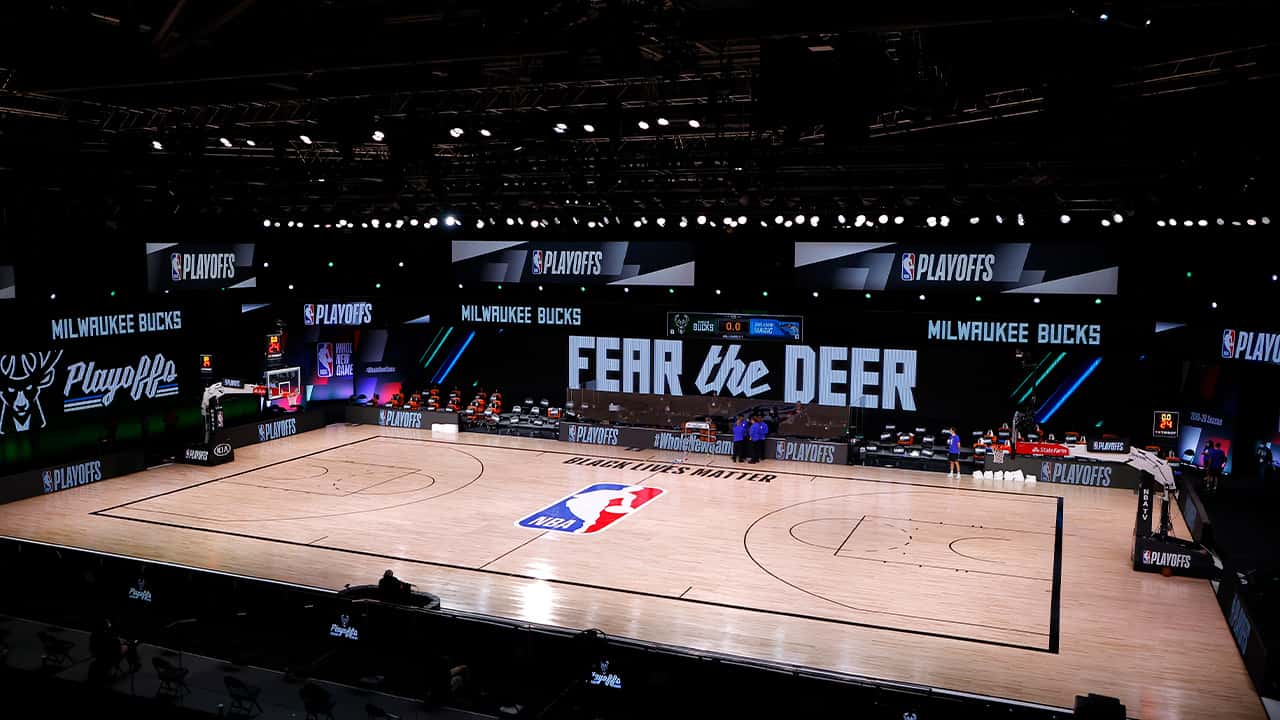 LAKE BUENA VISTA, Fla. — All three NBA playoff games scheduled for Wednesday have been postponed, with players around the league choosing to boycott in their strongest statement yet against racial injustice.

Called off: Games between Milwaukee and Orlando, Houston and Oklahoma City and the Los Angeles Lakers and Portland. The NBA said all three games would be rescheduled, yet did not say when.

The dramatic series of moves began when the Bucks — the NBA’s team from Wisconsin, a state rocked in recent days by the shooting by police officers of Jacob Blake, a Black man — didn’t take the floor for their playoff game against the Magic. The teams were set to begin Game 5 of their series shortly after 4 p.m., with the Bucks needing a win to advance to the second round.

Players had been discussing boycotting games in the bubble after the shooting of Blake by police in Kenosha, Wisconsin. More discussions among players on teams still in the bubble were scheduled Wednesday, presumably on how — or if — to go forward, but even before that the Bucks apparently decided they would act.

“Some things are bigger than basketball,” Bucks senior vice president Alex Lasry tweeted. “The stand taken today by the players and (the organization) shows that we’re fed up. Enough is enough. Change needs to happen. I’m incredibly proud of our guys and we stand 100% behind our players ready to assist and bring about real change.”

There are three other playoff games scheduled Thursday. It was unclear if they would be affected. Several NBA players, including the Lakers’ LeBron James, tweeted out messages demanding change and the Boston Celtics’ official Twitter account did the same.

“We weren’t given advanced notice about the decision but we are happy to stand in solidarity with Milwaukee, Jacob, and the entire NBA community,” Orlando guard Michael Carter-Williams said. “Change is coming.”

Magic players and referees were on the basketball court for the game but Milwaukee never took the floor. Eventually everyone else left and the arena staff soon took the balls, towels and tags that go on player chairs back inside.

National Basketball Players Association President Chris Paul of the Oklahoma City Thunder and guard Russell Westbrook of the Houston Rockets were seen emerging from a conversation, not long before it became known that their teams also decided to not play their scheduled game Wednesday.

“Today we stand united with the NBA Office, the National Basketball Players Association, the Milwaukee Bucks and the rest of the league condemning bigotry, racial injustice and the unwarranted use of violence by police against people of color,” the Magic and its ownership group, the DeVos family, said in a statement.

Demanding societal change and ending racial injustice has been a major part of the NBA’s restart at Walt Disney World. The phrase “Black Lives Matter” is painted on the arena courts, players are wearing messages urging change on their jerseys and coaches are donning pins demanding racial justice as well.

Many players wrestled for weeks about whether it was even right to play, fearing that a return to games would take attention off the deaths of, among others, Breonna Taylor and George Floyd in recent months.

Taylor, a 26-year-old Black woman, was fatally shot when police officers burst into her Louisville, Kentucky apartment using a no-knock warrant during a narcotics investigation in March. The warrant was in connection with a suspect who did not live there and no drugs were found. Then on May 25, Floyd died after a white Minneapolis police officer pressed a knee into the Black man’s neck for nearly eight minutes — all captured on a cell phone video.

The Celtics and Toronto Raptors met Tuesday to discuss boycotting Game 1 of their Eastern Conference semifinal series, which had been scheduled for Thursday. Members of the National Basketball Players Association were also part of those meetings, and Miami forward Andre Iguodala — a union officer — said around 2:15 p.m. that he did not believe a boycott plan had been finalized.

“When you talk about boycotting a game, everyone’s antenna goes up,” Iguodala said. “It’s sad you have to make threats like that — I wouldn’t say threats — but you have to be willing to sacrifice corporate money for people to realize there’s a big problem out there.”

The postponed NBA games came on the fourth anniversary of Colin Kaepernick’s very first protest of “The Star-Spangled Banner” before an NFL preseason game. Kaepernick sat through the anthem for his first protest, which he said was to protest racial inequality and police mistreatment of minorities. then famously kneeled during the anthem going forward.