Salon Posh bustled with activity for three days last week until someone complained to the city of Fresno.

After an initial warning, code enforcement showed up Thursday with a $1,075 fine and promised a $5,000 fine would be forthcoming if owner Tanya Alvarado didn’t close her doors.

She closed that afternoon and now has 15 days to appeal, and 30 days to pay the fine.

Alvarado estimated that she had already lost $30,000 during the pandemic shutdown, and had no other choice than to reopen. 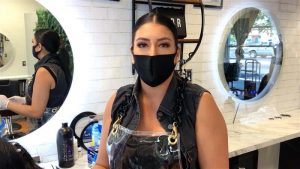 “I definitely am going to be appealing it today.” — Tanya Alvarado, Salon Posh owner

“I definitely am going to be appealing it today,” Alvarado told GV Wire℠ by phone. On Monday, she was heading to get the paperwork for a legal battle. Alvarado said she knew she’d have to fight to keep her eight-year-old salon open — she just didn’t think it would be this soon.

Related Story: ‘I Have to Fight’: Fresno Salon Owner Opens Doors in Defiance of State

As for the independent stylists that lease space from her?

“I’ve been blessed with a great team, and they were definitely on board with this whole movement, so they knew the possibilities of could happen.”

Fundraising To Pay the Fine

Alvarado says her customers were very excited to get the services they did while she reopened. And, they are helping her pay the city fine.

“Once we had to shut down, my phone has not stopped ringing with people wanting to support us,” said Alvarado.

She’s since set up a fundraiser on her salon’s Facebook page.

I am astonished at the amount of support I’ve received from family, friends and the public. As you all may know, our…

Arias says the Tower District is full of, “very engaged residents,” who are among the most likely residents in the city to call in complaints.

City Hall spokesman Mark Standriff tells GV Wire℠ by email: “Code Enforcement only responds when a complaint is made.”

Alvarado said she has been inspired by a movement called  “Open Safe California,” started by a business owner in the Bay Area, which encouraged salons, barbers and tattoo shops across the state to reopen on Aug. 17.

“It’s just really frustrating. It feels like we’ve been forgotten and brushed aside,” founder Shayana Flick told ABC10 in Sacramento.

Flick was also forced to close her business on Aug. 17, after reopening for just a few hours.

She writes on Facebook, “I opened my doors on Monday and within 6 hours the city was there to shut me down. They knew I wouldn’t comply, so the city went after my sweet 77-year-old landlord.”

My before pictures was the day I opened my second location. My first location was itty bitty (300sf), so to open a full…