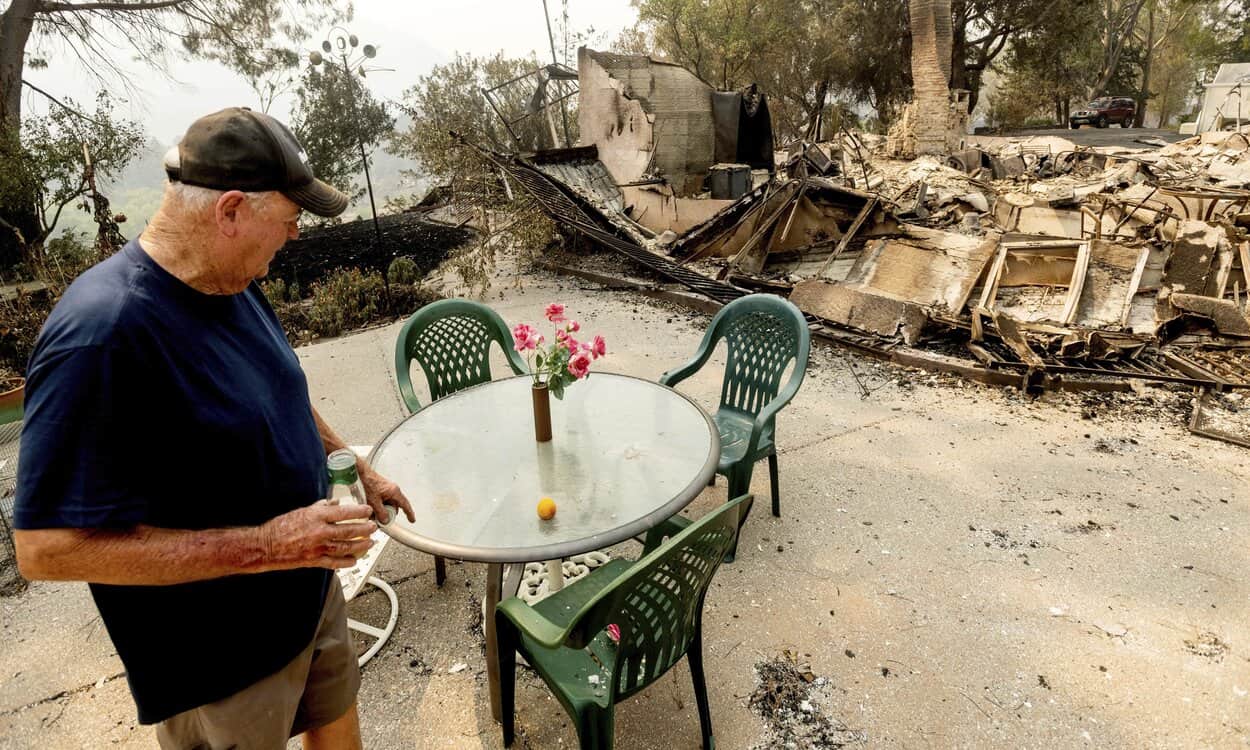 SAN FRANCISCO — Firefighters and aircraft from 10 states began arriving in California Friday to help weary crews battling some of the largest blazes in state history as weekend weather threatened to renew the advance of flames that have killed six people and incinerated hundreds of homes.

Some 560 wildfires were burning throughout the state but many were small and remote. The bulk of damage was from three clusters of blazes that were ravaging forest and rural areas in the wine country and San Francisco Bay Area.

Some 560 wildfires were burning throughout the state but many were small and remote. The bulk of damage was from three clusters of blazes that were ravaging forest and rural areas in the wine country and San Francisco Bay Area.

Those complexes, consisting of dozens of fires, exploded in size Friday. Together, they had scorched 991 square miles (2,566 square kilometers) and destroyed more than 500 homes and other buildings, fire officials said.

At least 100,000 people were under evacuation orders.

The third blaze, the CZU Lightning Complex, is in San Mateo and Santa Cruz counties.

The fires were sparked by lightning from unsettled weather earlier in the week. Cooler, more humid weather overnight helped firefighters make ground against the fires but the National Weather Service issued a fire weather watch from Sunday morning into Tuesday for the entire Bay Area and central coast.

Forecasters said there was a chance of thunderstorms bringing more lightning and erratic gusts.

Related Story: What’s in That Wildfire Smoke, and Why Is It So Bad for Your Lungs? Pam, who declined to give a last name, examines the remains of her partner’s Vacaville, Calif., home on Friday, Aug. 21, 2020. The residence burned as the LNU Lightning Complex fires ripped through the area Tuesday night. (AP Photo/Noah Berger)

That Could Help Crews Make Further Progress Against the Sprawling Fire

More than 12,000 personnel were fighting fires around the state, aided by fleets of helicopters and fixed-wing aircraft. By Friday, the state’s fire agency, Cal Fire, had called out 96% of its available fire engines. But reinforcements began to arrive.

The number of personnel assigned to the LNU complex, in the heart of wine country north of San Francisco, more than doubled from 580 to over 1,400 Friday and nearly 200 fire engines were on the scene, fire officials said.

That could help crews make further progress against the sprawling fire, which was just 15% contained. Most evacuations for the town of Vacaville were lifted Friday. The fire threat there was reduced after reaching the edges of town.

“I feel like we’re up on our feet, standing straight and actually moving a little bit forward,” Kavanaugh said Friday night.

However, the number of large fires was “staggering” and had put “tremendous strain” on firefighting resources throughout the Western states, he said.

Nevada and Arizona, for example, have battled sizable blazes this week as a heat wave swept the West. Hank Hanson, 81, gestures to the kitchen of his home, destroyed by the LNU Lightning Complex fires, in Vacaville, Calif., on Friday, Aug. 21, 2020. Hanson, who built the house thirty years ago, does not think he will rebuild. (AP Photo/Noah Berger)

Gov. Gavin Newsom said 10 states were sending personnel and equipment. The governor also said he was reaching out to Canada and Australia for help.

“We have more people but it’s not enough,” Newsom said.

In the Santa Cruz mountains south of San Francisco, about 1,000 firefighters were battling a fire 10 times the size they typically would cover, said Dan Olsen, a Cal Fire spokesman.

“We had last night three separate rescues that pulled our vital, very few resources away,” he said.

But Peter Koleckai credits a neighbor, not firefighters, with saving his home in a rural area where dozens of homes were reduced to smoldering ruins.

“We were here at about 3 o’clock in the morning and the fire department just left. They just left,” he said.

Koleckai said he ran to a firefighter and told him a brush fire was erupting next to a house. The Death Toll From California Fires Has Reached at Least Six

“They never went up there and it engulfed the whole house, took the house out,” he said.

A neighbor with a high pressure hose, firefighting equipment and a generator saved his home, Koleckai said.

Cal Fire Battalion Chief Mike Smith said typically a wildfire of the size burning through the region would have 10 or even 20 times as many firefighters.

“We are doing absolutely everything we can,” he said.

The death toll from California fires has reached at least six. Three bodies were found Thursday in a burned home in Napa County, said Henry Wofford, a Sheriff’s Office spokesman.

A man also died in neighboring Solano County, and a Pacific Gas & Electric utility worker was found dead Wednesday in a vehicle in the Vacaville area.

Also Wednesday, a helicopter pilot died in a crash while dropping water on a blaze in Fresno County.

Smoke and ash billowing from the fires has fouled the air throughout the San Francisco Bay Area and along California’s scenic central coast.

Related Topics:California wildfiresfirefightersFireswildfires
Up Next

GOP Senators Called Trump a Kook, Narcissist, and Liar Before He Became President