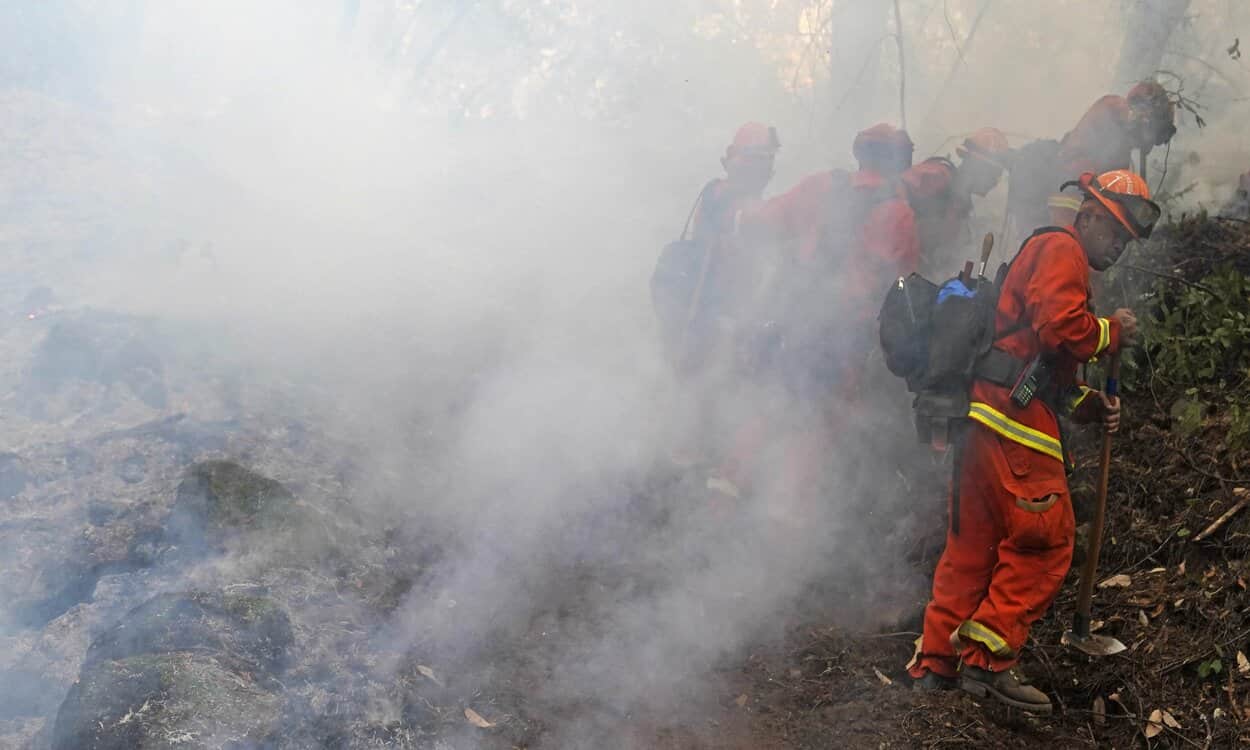 SAN FRANCISCO — Fire crews made slow progress Saturday battling some of the largest wildfires in California history — thanks to improved weather conditions and additional resources coming from others states.

The fires that started this week have killed five people, destroyed nearly 700 homes and other structures and forced tens of thousands from their houses.

But danger loomed with the threat of thunderstorms and lightning forecast for Sunday that could spark new fires and overwhelm firefighters battling hundreds of fires throughout the state.

Light winds, cool and moist air hitting land from the ocean and more equipment arriving for firefighters helped them make their most significant progress battling three massive Northern California fire “complexes” — multiple wildfires in one area being treated as a single incident. They have burned 1,045 square miles (2,700 square kilometers).

The fires that started this week have killed five people, destroyed nearly 700 homes and other structures and forced tens of thousands from their houses.

Containment for a fire that destroyed nearly 100 structures in the Santa Cruz mountains south of San Francisco grew slightly from 2% to 5%, and firefighters established a fire break aimed at protecting the evacuated University of California, Santa Cruz campus and the surrounding area. The health impact of wildfire exposure depends in part on on the fire itself and how much smoke a person breathes in, how often and for how long. (AP Photos/Noah Berger)

At Least 100,000 People Were Under Evacuation Orders

“It’s not a silver bullet but it gives us a really good stronghold to keep the fire from moving south toward those communities,” California Department of Forestry and Fire Protection Fire Battalion Chief Mike Smith said.

About 560 wildfires were burning throughout the state but many were small and remote. The bulk of damage was from three clusters of blazes that were ravaging forest and rural areas in San Francisco Bay Area and wine country north of San Francisco.

At least 100,000 people were under evacuation orders.

Two Bay Area clusters became the second- and third-largest wildfires in recent state history by size, according to state fire records. The third blaze cluster is in San Mateo and Santa Cruz counties.

The fires were sparked by lightning earlier in the week. Cooler, more humid weather overnight helped firefighters make ground against the fires but the National Weather Service issued a fire weather watch from Sunday morning into Tuesday for the entire Bay Area and for California’s central coast.

Forecasters said there was a chance of thunderstorms bringing more lightning and erratic gusts.

Related Topics:California wildfiresfirefightersFireswildfires
Up Next

Questions and Answers on Status of Trump’s Border Wall