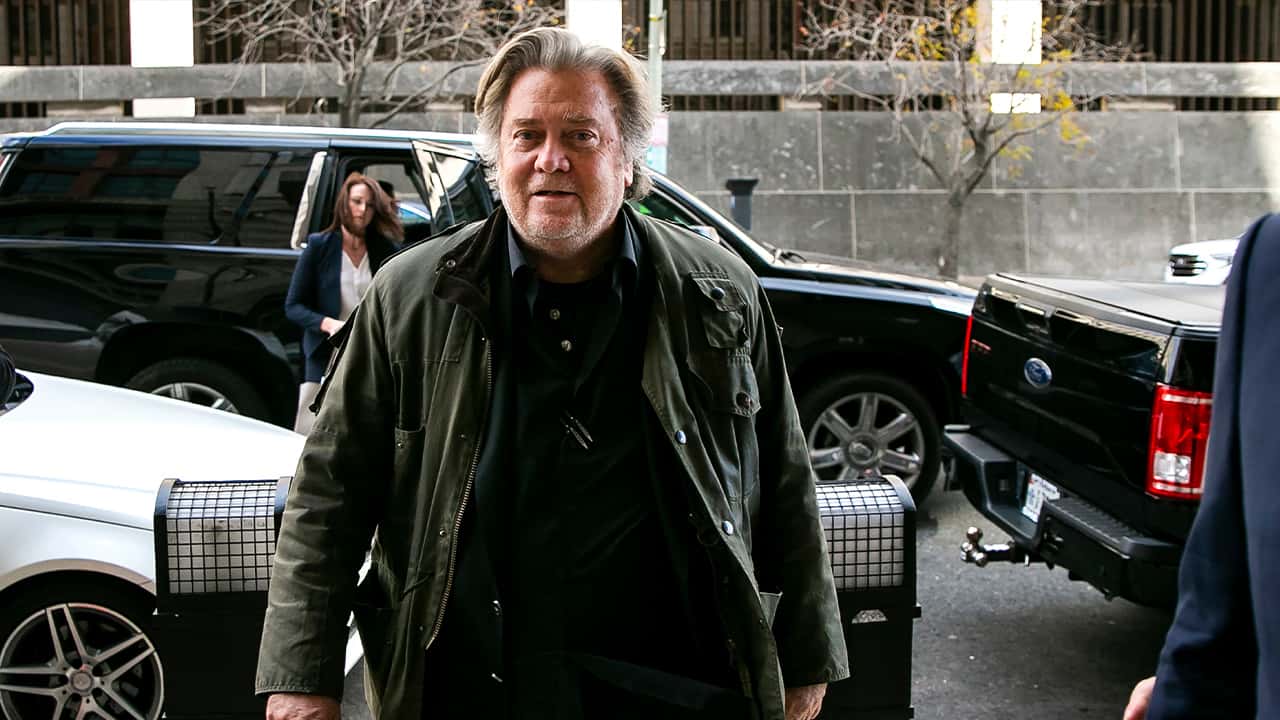 NEW YORK — Former White House adviser Steve Bannon was arrested Thursday on charges that he and three others ripped off donors to an online fundraising scheme “We Build The Wall.”

The fundraiser was headed by men who pushed their close ties to President Donald Trump, giving their effort a legitimacy that helped them raise more than $25 million. They touted their effort to help the president realize his vision of a “big beautiful” border wall along the U.S.-Mexico line, especially after his effort to redirect millions in government funds, was held up through lawsuits.

According to the indictment, Bannon promised that 100% of the donated money would be used for the project, but the defendants collectively used hundreds of thousands of dollars in a manner inconsistent with the organization’s public representations.

But according to the criminal charges unsealed Thursday, very little of the wall was actually constructed. Instead, the money lined the pockets of some of those involved. Bannon received over $1 million himself, using some to secretly pay co-defendant, Brian Kolfage, the founder of the project, and to cover hundreds of thousands of dollars of Bannon’s personal expenses.

According to the indictment, Bannon promised that 100% of the donated money would be used for the project, but the defendants collectively used hundreds of thousands of dollars in a manner inconsistent with the organization’s public representations.

They faked invoices and sham “vendor” arrangements, among other ways, to hide what was really happening, according to the indictment. “All money donated to the ‘We Build the Wall’ campaign goes directly to wall!!! Not anyone’s pocket,” the lawsuit said.

Bannon is among a stunning list of former Trump associates who have found themselves under indictment or in jail, including his former campaign chair, Paul Manafort, his longtime lawyer, Michael Cohen, and his former national security adviser, Michael Flynn.

An immigration plan unveiled by Trump last year had included a proposal to allow public donations to pay for his long-promised southern border wall. At that point, the GoFundMe campaign launched by war veteran Brian Kolfage had raised more than $20 million for wall construction.

But Trump later denounced the project publicly, tweeting last month that “I disagreed with doing this very small (tiny) section of wall, in a tricky area, by a private group which raised money by ads. It was only done to make me look bad, and perhaps it now doesn’t even work. Should have been built like rest of Wall, 500 plus miles,” he said.

The defendants learned last October from a financial institution that the “We Build the Wall” campaign might be under federal criminal investigation and took additional steps to conceal the fraud, according to the indictment.

Kolfage did not return a call seeking comment, but according to the indictment, he once said: “It’s not possible to steal the money. I can’t touch that money. It’s not for me.”

A phone at the office of Bannon’s lawyer went unanswered Thursday morning. A spokeswoman for Bannon did not immediately respond to a request for comment. It was not immediately clear who would represent Kolfage at an initial court appearance, and his phone was unanswered.

The indictment said Kolfage “went so far as to send mass emails to his donors asking them to purchase coffee from his unrelated business, telling donors that the coffee company was the only way he ‘keeps his family fed and a roof over their head.’”

Some donors wrote directly to Kolfage saying they did not have a lot of money and were skeptical of online fundraising campaigns, the indictment said. It added that Kolfage would reassure the donors that nobody was being compensated.

In fact, the indictment said, an arrangement had been made among the Bannon and his codefendants to pay Kolfage $100,000 up front and an additional $20,000 monthly.

Kolfage eventually spent some of the over $350,000 he received on home renovations, payments toward a boat, a luxury SUV, a golf cart, jewelry, cosmetic surgery, personal tax payments and credit card debt.

We Build the Wall, launched on Dec. 17, 2018, originally promoted a project for 3 miles of fence posts in South Texas that was ultimately built and largely funded by Fisher Industries, which has received about $2 billion in funding for wall contracts. Tommy Fisher, CEO, didn’t respond to calls for comment.

We Build the Wall, launched on Dec. 17, 2018, originally promoted a project for 3 miles of fence posts in South Texas that was ultimately built and largely funded by Fisher Industries, which has received about $2 billion in funding for wall contracts. Tommy Fisher, CEO, didn’t respond to calls for comment.

In 2019, Kolfage and Fisher successfully constructed a half-mile of bollard-style border fence on privately donated land in New Mexico near of El Paso, Texas. We Build The Wall used early construction to fundraise for more cash and more private land donations in along border states.

Construction faced resistance by local authorities in New Mexico and Texas and accusations of improper permitting. In May, federal officials found that a section of Fisher’s privately-funded wall violated flood construction standards along the Rio Grande. It also caused erosion.

Dustin Stockton, who helped start the campaign then left the project to work on the upcoming presidential election, said it seemed clear that federal prosecutors were “attacking political infrastructure that supports President Trump right before the election.”

He could not comment on the specific charges yet. He was not charged in the case.

Bannon Pushed Out of Trump Administration in 2017

Bannon led the conservative Breitbart News before being tapped to serve as chief executive officer of Trump’s campaign in its critical final months, when he pushed a scorched earth strategy that included highlighting the stories of former President Bill Clinton’s accusers. After the election, he served as chief strategist during the turbulent early months of Trump’s administration.

The blunt-spoken, combative Bannon was the voice of a nationalistic, outsider conservatism, and he pushed Trump to follow through on some of his most contentious campaign promises, including his travel ban on several majority-Muslim countries. But Bannon also clashed with other top advisers, and his high profile sometimes irked Trump. He was pushed out in August 2017.

Bannon, who served in the Navy and worked as an investment banker at Goldman Sachs before becoming a Hollywood producer, has been hosting a pro-Trump podcast called “War Room” that began during the president’s impeachment proceedings and has continued during the pandemic.

Kobach, a conservative firebrand and the former Kansas secretary of state, lost his race for Senate in Kansas earlier this month. Kobach is known nationally for advocating restrictive immigration policies and his name was tossed around for a possible position in Homeland Security that never came to fruition.

Kolfage was interviewed a day before the indictment was unsealed by Bannon on Bannon’s “War Room” podcast. He discussed a dispute with the fundraising platform and encouraged future donors to go straight to their website.

Bannon asked him whether he thought the wall could get built in order for Trump to fulfill his campaign promise.

“I think we stand in a pretty good spot, as long as he gets elected,” Kolfage said.