Trump Angling for Votes With Immigration Talk, Nod to Women 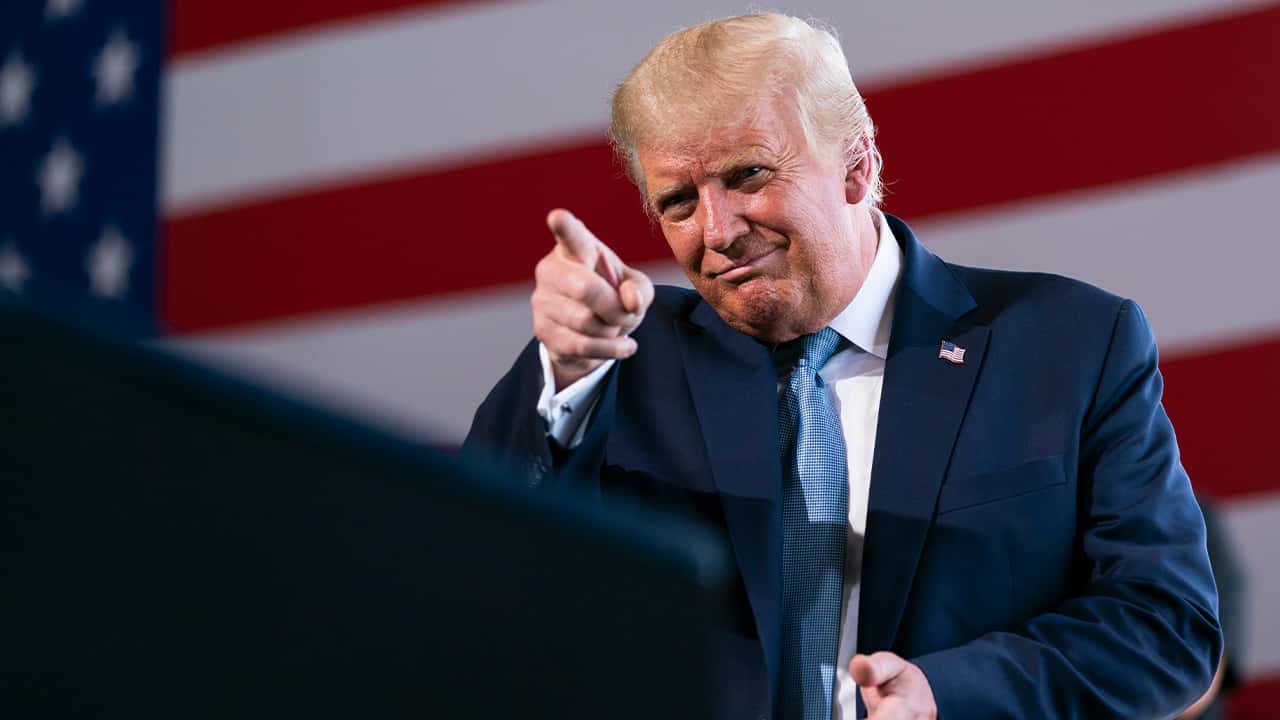 YUMA, Ariz. — Grappling for votes — and the spotlight — as Democrats hold their national convention, President Donald Trump reached back Tuesday to the signature issue of his 2016 campaign to deliver a broadside against Democratic rival Joe Biden over immigration.

In Arizona, one of the top 2020 battleground states, the president sought to paint a Biden victory in apocalyptic terms, insisting “the survival of our nation is at stake” in November, as he slammed what he hyperbolically labeled the “insane and lethal policies” of his opposition.

As Democrats gathered virtually, Trump targeted voters in a pair of key swing states and sought to curry favor with women voters by pardoning Susan B. Anthony, a leader in the women’s suffrage movement.

In Arizona, one of the top 2020 battleground states, the president sought to paint a Biden victory in apocalyptic terms, insisting “the survival of our nation is at stake” in November, as he slammed what he hyperbolically labeled the “insane and lethal policies” of his opposition.

“Biden’s plan is the most radical, extreme, reckless, dangerous and deadly immigration plan ever put forward by a major party candidate,” he said. “It must be defeated. and it will be defeated on November 3.”

Trump repeatedly mischaracterized Biden’s views on immigration, which are more centrist than many others in his party. Biden, for instance, does not support abolishing U.S. Immigration and Customs Enforcement, and he argues that crossing the U.S. border illegally should be criminally prosecuted rather than made a civil offense, as many other top Democratic presidential hopefuls proposed.

With his second campaign trip in two days, Trump was hoping to halt an expected convention polling bump for his rival and shore up support with his focus on immigration, one of the most important issues to his political base. He was also trying to stanch an erosion in support among female voters with a symbolic nod on the centennial of the ratification of the 19th Amendment.

In recent weeks, Trump has been trying to build support within the pivotal female voter constituency and has stepped up his events aimed at women. His campaign has launched another “women for Trump” bus tour, and the president has embraced a “law and order” message with renewed vigor.

Trump Highlighted His Immigration Agenda During His Stop in Yuma

The president also worked in a last-minute stop in Cedar Rapids, Iowa, for a briefing about damage from the derecho last week that has left thousands without power and caused catastrophic damage across the battleground state. Many there have expressed outrage that their plight has not received more national attention.

The storm, which packed 100 mph winds and similar power to an inland hurricane, blew down trees, flipped vehicles and caused widespread damage.

Trump highlighted his immigration agenda during his stop in Yuma, and got an update on construction of his southern border wall. The president insisted that, in addition to fulfilling his pledge to build the wall, Mexico was also paying for it — even though they’re not.

“They are paying for it,” he said as he stood in front of a replica of his wall, telling reporters he’s planning to enact a border crossing toll at some point in the future.

“Mexico will be paying,” he said. “We’re figuring how much we have to charge.”

Before leaving Washington, Trump held a White House event to announce the pardon of Anthony, convicted of voting in 1872 in violation of laws permitting only men to vote. But he quickly pivoted to the upcoming election and the issue of voting by mail.

“Win, lose or draw, we have to get it right,” Trump said of the November vote count, leveling a fresh offensive against mail-in voting.

“You can’t have millions and millions of ballots sent all over the place, sent to people that are dead, sent to dogs, cats, sent everywhere,” Trump said.

In fact, voter fraud has proved exceedingly rare. The Brennan Center for Justice in 2017 ranked the risk of ballot fraud at 0.00004% to 0.0009%, based on studies of past elections.

Only nine states have plans for “universal” mail-in voting, in which ballots are sent automatically to registered voters. Five of those states relied on mail-in ballots even before the coronavirus pandemic raised concerns about voting in person.

Only nine states have plans for “universal” mail-in voting, in which ballots are sent automatically to registered voters. Five of those states relied on mail-in ballots even before the coronavirus pandemic raised concerns about voting in person.

Trump’s pardon announcement came on the 100th anniversary of the ratification of the 19th Amendment, which ensured women the right to vote. The amendment states, “The right of citizens of the United States to vote shall not be denied or abridged by the United States or by any State on account of sex.” Congress passed it in 1919, and the amendment was ratified on Aug. 18, 1920.

Anthony was arrested for voting in Rochester, New York, and convicted in a widely publicized trial. Although she refused to pay the fine, the authorities declined to take further action.

“She felt the trial was the greatest miscarriage of justice because she had not had an opportunity to have a jury of her peers, and the jury didn’t get to vote,” according to Deborah L. Hughes, president and CEO of The National Susan B. Anthony Museum and House in Rochester, where Anthony died in 1906.

“So to pardon her is to validate the trial, and she would not buy that idea at all,” Hughes said.

Hughes said the question to ask on the anniversary is how she would want to be honored. “She would be the first to say if any president wanted to honor her, the best way to do that is to make sure there is no voter suppression anywhere in the United States,” Hughes said.

Preparations for Trump’s own acceptance speech next week were under way at the White House, where a stage was being erected on the South Lawn.

As was the case Monday in Minnesota and Wisconsin, Trump did not venture beyond the airports in Iowa or Arizona — a reflection of the new realities of campaigning in the midst of a pandemic. But Trump’s Yuma rally felt much like his rallies of old, with a tightly packed crowd of hundreds shouting and cheering — though many were wearing “TRUMP” and “MAGA” masks.