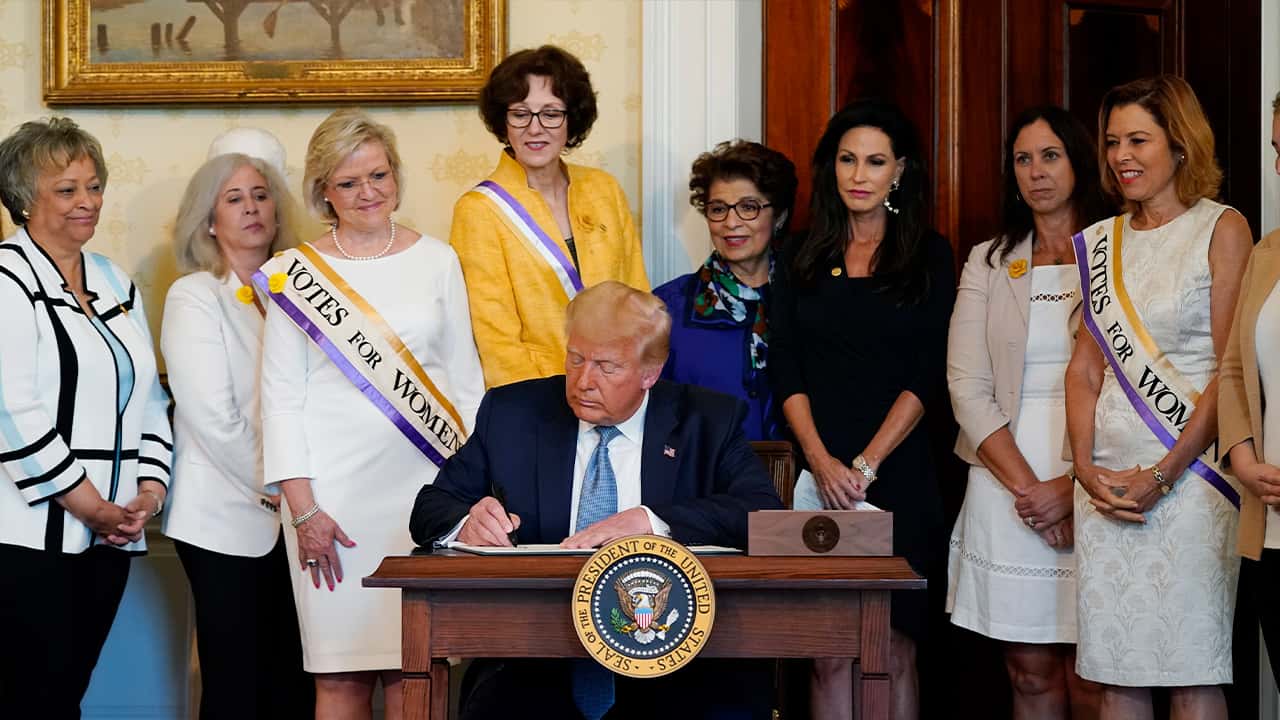 WASHINGTON — As he works to curry favor with women voters, President Donald Trump said Tuesday that he will pardon Susan B. Anthony, a women’s suffrage leader arrested for voting in 1872 in violation of laws permitting only men to vote.

Trump’s support has been eroding among suburban white women in battleground states since his last campaign, in part because of his harsh rhetoric.

Trump held a White House event to announce the pardon and sign a proclamation declaring August 2020 as National Suffrage Month. But he and the women assembled for the event quickly pivoted to the upcoming election and the outcry over Postal Service disruptions that Democrats say endanger the voting rights of millions of Americans who would vote by mail in November during the coronavirus pandemic.

“Win, lose or draw, we have to get it right,” Trump said of the November vote count, leveling a fresh offensive against mail-in voting.

“You can’t have millions and millions of ballots sent all over the place, sent to people that are dead, sent to dogs, cats, sent everywhere,” Trump said.

In fact, voter fraud has proved exceedingly rare. The Brennan Center for Justice in 2017 ranked the risk of ballot fraud at 0.00004% to 0.0009%, based on studies of past elections.

Only nine states currently have plans for “universal” mail-in voting, where ballots are sent automatically to registered voters. Five of those states relied on mail-in ballots even before the coronavirus pandemic raised concerns about voting in person. FILE – In this September 1916 file photo, demonstrators hold a rally for women’s suffrage in New York. The Seneca Falls convention in 1848 is widely viewed as the launch of the women’s suffrage movement, yet women didn’t gain the right to vote until ratification of the 19th Amendment in 1920. (AP Photo/File)

In Recent Weeks, Trump Has Been Trying to Build Support Within the Pivotal Female Voter Constituency

Trump said he would sign “a full and complete pardon” for Anthony later Tuesday, the 100th anniversary of the ratification of the 19th Amendment, which ensured women the right to vote. It’s also known as the Susan B. Anthony Amendment.

In recent weeks, Trump has been trying to build support within the pivotal female voter constituency and has stepped up his events aimed at women. His campaign has launched a “women for Trump” bus tour and the president has embraced a “law and order” message with renewed vigor.

Anthony was arrested for voting in her hometown of Rochester, New York, and convicted in a widely publicized trial. Although she refused to pay the fine, the authorities declined to take further action.

The 19th Amendment states that “The right of citizens of the United States to vote shall not be denied or abridged by the United States or by any State on account of sex.” Congress passed it in 1919, and the amendment was ratified 100 years ago on Aug. 18, 1920.

Visiting Anthony’s grave site in Rochester on Election Day has become a popular ritual in recent years. Thousands turned out in 2016 for the presidential match-up between Trump and Hillary Clinton. In 2018, voters showed up by the dozens to put their “I Voted” stickers on her headstone.

Not everyone was enthusiastic about the pardon.

Democratic New York Lt. Gov. Kathy Hochul demanded that Trump rescind it. “She was proud of her arrest to draw attention to the cause for women’s rights, and never paid her fine,” Hochul tweeted. “Let her Rest In Peace.”