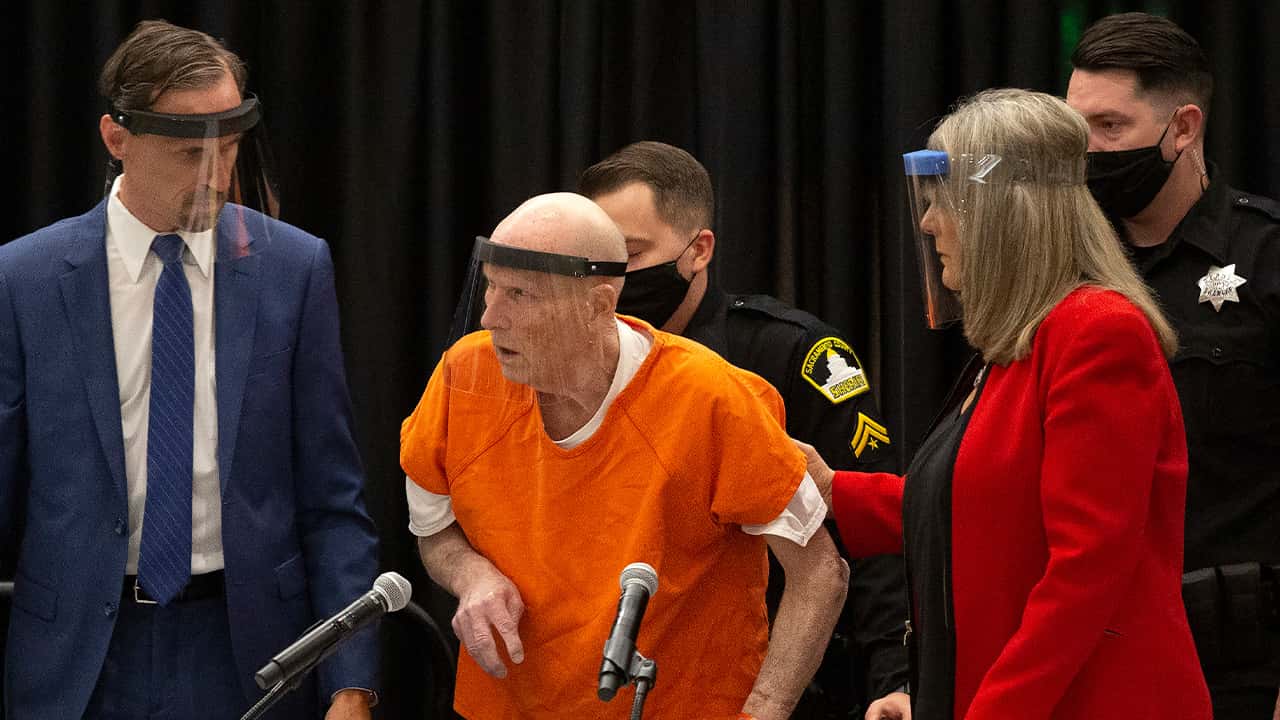 SACRAMENTO — Victims after victim lined up on Tuesday to describe Joseph DeAngelo as a “sick monster,” “horrible man” and “subhuman” who stole their innocence and changed their lives during a more than decade-long reign of rape and murder that earned him the nickname of the Golden State Killer.

“He and his knife had complete control over me for the next two hours. He truly is an evil monster with no soul.” — the daughter of rape survivor Patricia Murphy read from her mother’s statement

The daughter of one rape victim gave him an obscene hand gesture and cursed him during the first of four days of hearings in Sacramento County Superior Court before he is formally sentenced to life in prison on Friday.

Some read statements on behalf of their loved ones who could not testify in person, while others proudly gave their names now that DeAngelo, 74, is heading to prison.

“He and his knife had complete control over me for the next two hours,” the daughter of rape survivor Patricia Murphy read from her mother’s statement. “He truly is an evil monster with no soul.”

Murphy in her own statement raised her middle finger and said DeAngelo “can go straight to hell.”

He was a former a former police officer in California who eluded capture for four decades.

The scope of crimes “is simply staggering,” prosecutors said in a court summary released Monday: 13 known murders and nearly 50 rapes between 1975 and 1986.

Sixteen of his Sacramento County rape victims began confronting him Tuesday in a courthouse that is otherwise still sealed from the public because of the coronavirus. A similar number planned to tell Sacramento County Superior Court Judge Michael Bowman on Wednesday and Thursday how DeAngelo’s crimes changed their lives. FILE – In this July 12, 2018, file photo, Jane Carson-Sandler, of South Carolina, who was raped by the Golden State Killer in 1976, holds a sign with a message to her attacker in Sacramento, Calif. Carson-Sandler says she’s served an effective life sentence in the more than four decades since she was among the first of dozens of rape victims of a one-time police officer who eventually became known as the Golden State Killer. Carson-Sandler is among survivors who plan to confront Joseph James DeAngelo this week during an extraordinary four days of court hearings before the 74-year-old is sentenced to life in prison. (AP Photo/Don Thompson, File)

Deangelo in June Pleaded Guilty to 13 Murders and 13 Rape-Related Charges, but Publicly Admitted to Dozens More

Pete Schultz told how he “performed horrific acts against our mother while she was tied and blindfolded.” He himself was tied to bedpost at age 11, while his 7-year-old sister was locked in her room during the attack on Wini Schultz.

He called DeAngelo a “sick monster,” and noted that the only characteristic his mother could recall was that “she was certain he had a very inadequate penis.”

That was a recurring theme for witnesses, who tried to break through to DeAngelo. He sat in an orange jail jumpsuit, wearing a mask to slow the spread of the coronavirus, staring straight ahead.

DeAngelo in June pleaded guilty to 13 murders and 13 rape-related charges, but publicly admitted to dozens more because the statute of limitations for sexual assaults had expired.

Defense attorneys did not respond to requests for comment and did not file a response to prosecutors’ outline of the case.

All told, he admitted to harming 87 victims in 53 separate crimes scenes spanning 11 California counties in a plea deal that spares him the death penalty, prosecutors said.

That’s a larger number of victims than prosecutors cited after his admission in June to 161 crimes involving 48 people, but Ventura County District Attorney Greg Totten said the higher number includes those who chose not to participate in having DeAngelo publicly admit to crimes in which he could not be formally charged.

Certain Triggers Can Still Bring Flashbacks to That Night in 1976

His nicknames showed the escalation and geographic sweep of his crimes, prosecutors said: the Visalia Ransacker, thought to be responsible for about 100 burglaries and one slaying in that San Joaquin Valley farm town; the East Area Rapist; the Original Night Stalker. And finally, the Golden State Killer when investigators eventually linked the crimes that stretched across much of the state.

Certain triggers can still bring flashbacks to that night in 1976 when DeAngelo confronted her with a butcher knife as she snuggled in bed with her 3-year-old son after her husband left for work at a nearby military base.

“Each time, he escaped, slipping away silently into the night, leaving communities terrified for years,” prosecutors said.

He was only identified and arrested in 2018 by using a new form of DNA tracing.

“This has been on my mind for 44 years. That’s a long time,” Jane Carson-Sandler said before her testimony.

Certain triggers can still bring flashbacks to that night in 1976 when DeAngelo confronted her with a butcher knife as she snuggled in bed with her 3-year-old son after her husband left for work at a nearby military base.

“I hope that he’ll be listening, but we know that during the hearing when he pleaded guilty, he never lifted his head,” she said.

She is among survivors and prosecutors who contend that DeAngelo is merely masquerading as a feeble old man in a wheelchair.

Prosecutors cited “his slow gait, the distorted twist of his hands” and his halting answers to Bowman in June. But, they said, his “agile movement and behavior in his jail cell indicate an individual who is healthy and physically active.”