MINSK, Belarus — Workers heckled and jeered President Alexander Lukashenko on Monday as he visited a factory and strikes grew across Belarus, raising the pressure on the authoritarian leader to step down after 26 years in power.

On the ninth straight day of mass protests over the official results of the Aug. 9 presidential election that demonstrators say was rigged, Lukashenko flew by helicopter to a factory in the capital of Minsk to rally support, but he was met by angry workers chanting, “Go away!”

On the ninth straight day of mass protests over the official results of the Aug. 9 presidential election that demonstrators say was rigged, Lukashenko flew by helicopter to a factory in the capital of Minsk to rally support, but he was met by angry workers chanting, “Go away!”

He told the workers: “I will never cave in to pressure.”

Lukashenko said the country could have a new presidential election, but only after approving an amended version of its constitution — an apparent bid to buy some time amid the growing political crisis.

He told the factory workers that those who intend to strike could leave if they want, but he added that the protests are ruining the economy and said the country would collapse if he steps down.

“Some of you might have got the impression that the government no longer exists, that it has tumbled down. The government will never collapse, you know me well,” the 65-year-old former state farm director shouted.

As he spoke, over 5,000 striking workers from the Minsk Tractor Plant marched down the streets of the city, joining an increasing number of state-controlled factories across the nation of 9.5 million in walking off the job.

Miners at the huge potash factory in Soligorsk also said they were joining the strike. The giant Belaruskali factory that accounts for a fifth of the world’s potash fertilizer output is the nation’s top cash earner.

The strikes follow a brutal dispersal of peaceful, post-election demonstrations last week that were met by rubber bullets, tear gas, clubs and stun grenades. At least 7,000 were detained by riot police, with many complaining they were beaten mercilessly. One protester was killed and hundreds were wounded.

The workers want Lukashenko to give way to Sviatlana Tsikhanouskaya, the leading opposition candidate in the election.

“Lukashenko is a former president. He needs to go,” said Sergei Dylevsky, the leader of the protest at the Minsk Tractor Plant, adding that Tsikhanouskaya is “our president, legitimate and elected by the people.”

Dylevsky voiced concern that the iron-fisted leader’s weekend telephone calls with Russian President Vladimir Putin could herald an attempt by the country’s giant eastern neighbor to send in troops to prop up Lukashenko.

“We don’t want that, and we won’t let that happen,” he said.

Lukashenko spoke twice with Putin over the weekend and reported the Russian leader told him Moscow stands ready to provide support in the face of what he described as foreign aggression. He claimed that NATO nations are beefing up military forces on the border with Belarus — a claim the alliance rejected.

NATO Secretary-General Jens Stoltenberg reaffirmed Monday that the alliance has no military buildup in the region. “We remain vigilant, strictly defensive, and ready to deter any aggression against NATO allies,” he said.

Lithuanian officials pointed at a military exercise Belarus abruptly launched near the borders of Lithuania and Poland on Monday and warned about worrying signs that Russia might be planning to use the situation to take over Belarus.

“If they consider just incorporating the country in a simple way, the consequences would be unpredictable,” Lithuanian Foreign Minister Linas Linkevicius said.

Alexander Klaskovsky, an independent Minsk-based political analyst, said the conversations with Putin may reflect the Kremlin mulling support for Lukashenko in exchange for his consent for a closer union between the two nations, which the Belarusian leader has resisted in the past.

“Russia understands Lukashenko’s weakness and is preparing its own scenario, which could envisage a deep integration in exchange for military assistance,” Klaskovsky said.

The official results of the election gave Lukashenko 80% of the votes and Tsikhanouskaya only 10%, but the opposition claimed the outcome was falsified. Tsikhanouskaya has cited reports from precincts around the country showed her winning 60%-70% of the vote.

The 37-year-old former teacher left for neighboring Lithuania on Aug. 11 under what her associates described as pressure from law enforcement officials. Her husband, an opposition blogger, has been jailed since May, and she had replaced on the ballot. 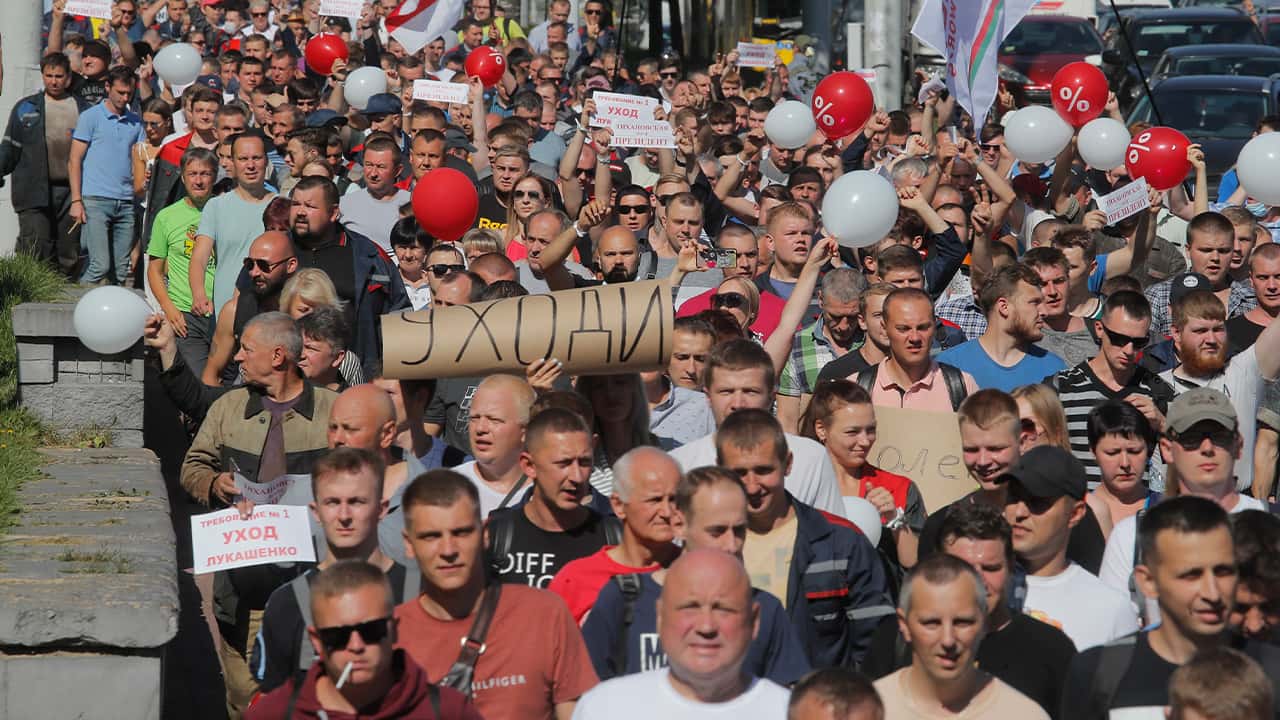 Workers with handmade posters reading “Go away!” march toward the Minsk Wheel Tractor Plant where Belarusian President Alexander Lukashenko addresses employees in Minsk, Belarus, Monday, Aug. 17, 2020. The top opposition candidate in Belarus’ presidential vote who left the country last week announced Monday she was ready to “act as a national leader” to help Belarus transition to a rerun of an election that extended the 26-year rule of authoritarian President Alexander Lukashenko and sparked unprecedented mass protests. (AP Photo/Dmitri Lovetsky)

In a video statement on Monday, Tsikhanouskaya said she was prepared to step in.

“I’m ready to take on the responsibility and act as a national leader in order for the country to calm down, return to its normal rhythm, in order for us to free all the political prisoners and prepare legislation and conditions for organizing new presidential elections,” she said.

After the police crackdown and reports of abuse provoked widespread anger, the authorities backed off, allowing big weekend protests and releasing many of the detainees. The Interior Ministry said that just 122 detainees were still in custody as of Monday.

After the police crackdown and reports of abuse provoked widespread anger, the authorities backed off, allowing big weekend protests and releasing many of the detainees. The Interior Ministry said that just 122 detainees were still in custody as of Monday.

Huge crowds turned out Saturday to pay their respects to Alexander Taraikovsky, a protester who died Aug. 10. The authorities initially claimed he died when an explosive device he intended to throw at police blew up in his hands, but Associated Press video showed that he had no explosive when he fell on the ground, his shirt bloodied. His partner said his body had a perforation in his chest that she believes was a bullet wound.

Interior Minister stepped back from the official version Sunday, acknowledging that Taraikovsky might have been killed by a rubber bullet. His partner, Elena German, told The Associated Press Monday that she will push for an independent investigation into what she described as his killing at point-blank range.

On Sunday, an estimated 200,000 people filled the central Independence Square and nearby avenues in the largest protest the country has ever seen.

In Brussels, European Council President Charles Michel convened an emergency summit of EU leaders on Wednesday to discuss the handling of the election and the crackdown.

“The people of Belarus have the right to decide on their future and freely elect their leader,” Michel said in a tweet. “Violence against protesters is unacceptable and cannot be allowed.”

On Friday, the 27 EU foreign ministers underlined that the elections were neither free nor fair and decided to start drawing up a list of people who could face sanctions from the violence.

German President Frank-Walter Steinmeier urged Lukashenko Monday to “follow the path of talks, not to rely on violence but on dialogue.”

“I appeal to the Belarusian military not to sin by using violence against their own people,” he said.