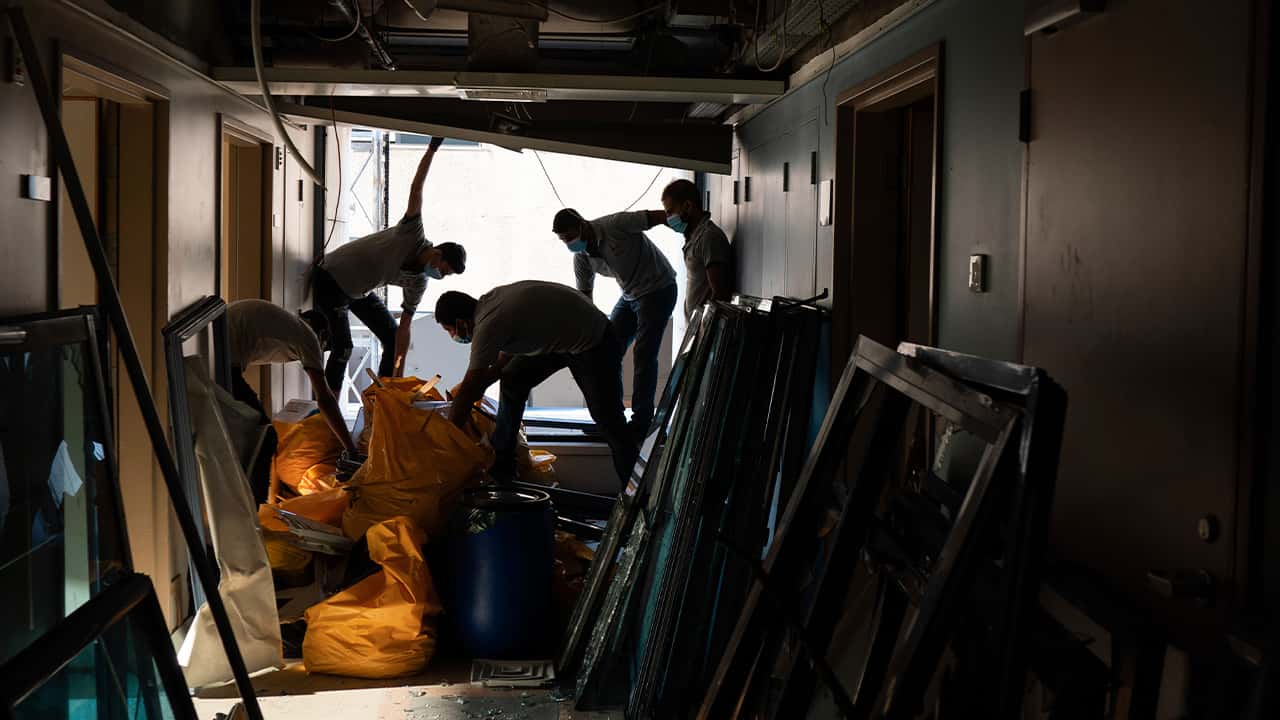 BEIRUT — Visiting U.S. Under Secretary for Political Affairs David Hale says the Federal Bureau of Investigation will be joining Lebanese and other international investigators in the probe into the Beirut port blast that killed and wounded thousands.

Hale said during a visit to one of the impacted neighborhood in Beirut on Thursday that the FBI will take part at the invitation of Lebanese authorities.

He said the participation in the probe is one of the ways the US is helping Lebanon in dealing with the aftermath of the drastic explosion. Hale arrived in Lebanon Thursday and is due to meet with Lebanese officials for the next two days.

BEIRUT — Lebanon’s Parliament on Thursday approved a state of emergency in Beirut in its first session since the catastrophic Aug. 4 explosion, granting the military sweeping powers amid rising popular anger at official corruption and mismanagement and political uncertainty.

The government resigned after the blast that killed more than 170 people, injured at least 6,000 and wrecked the capital’s port and caused widespread damage across the capital.

The disaster has raised popular fury toward Lebanon’s leaders to a new level as the country reels from an unprecedented economic and financial crisis, along with the coronavirus pandemic.

Before it resigned, the government declared the state of emergency that gave the military the power to declare curfews, prevent public gatherings and censor the media, as well as refer civilians to military tribunals for alleged security breaches. The action required approval by lawmakers, which they granted Thursday.

The move has been criticized by rights groups and others who say the civilian government already was operating with increased powers because of the coronavirus outbreak. Some pointed to the military crackdown on protesters last week, fearing the extended powers could lead to silencing dissent.

Parliament met outside its regular location to observe social distancing amid a surge of coronavirus cases and because of nearby ongoing protests by those who want the entire political class to step down. Volunteers from the American University of Beirut gather as they prepare to help remove debris in a neighborhood near the site of last week’s explosion that hit the seaport of Beirut, Lebanon, Thursday, Aug. 13, 2020. (AP Photo/Felipe Dana)

After the Government Resigned Monday, the Cabinet Is in a Caretaker Capacity

The session opened with a moment of silence for those killed in the blast. It then moved to discuss the resignation of nearly a dozen lawmakers last week to protest the government’s handling of the blast. A major Christian party bloc is boycotting the session.

It still was not known what caused the fire responsible for igniting nearly 3,000 tons of ammonium nitrate that were stored for years in Beirut’s port. But documents have emerged that show the country’s top leadership and security officials were aware of the stockpile.

After the government resigned Monday, the Cabinet is in a caretaker capacity.

It was not immediately clear if Parliament had technically extended the government decision on the state of emergency for 15 days or simply imposed it to take effect starting Thursday, said rights lawyer Nizar Saghieh.

“There is incredible chaos,” Saghieh said. He said the state of emergency’s only justification is to extend the power of the state and security agencies and “control the opposition.”

“We were waiting for the army to help in reconstruction, not be an extension of power,” he said.

Lawmaker Simon Abi Ramieh protested that Parliament was convened to vote on the state of emergency while it was already in effect and called instead for forming a parliamentary committee to investigate the explosion.

Since the Resignation, There Has Been a Flurry of Closed-Door Meetings

“We are living in a state of institutional blunder,” he said. “We are in a place and the Lebanese people are somewhere else. … The public wants to know the truth behind the negligence that led to the explosion.”

Lebanon’s political landscape has been shaken by the events. Before resigning, the caretaker prime minister proposed early elections, an idea that was not supported by the Parliament speaker and other political groups.

Since the resignation, there has been a flurry of closed-door meetings and political haggling to form a government that meets the approval of domestic and international powers. Lebanon’s complicated sectarian-based political system requires the prime minister to be chosen from among Sunni Muslims. It wasn’t clear if there would be a national unity government — which would mean the participation of all political parties — or an emergency transition government.

France’s defense minister was due to arrive in Beirut on Thursday amid a flurry of foreign visits to the stricken country. France has been leading efforts to help Lebanon emerge from the drastic blow, including talking to political parties to hasten the formation of a new government.

Also on Thursday, U.S. Under Secretary for Political Affairs David Hale was due to arrive in Lebanon for a two-day visit. Hale is expected to “reiterate the American government’s commitment to assist the Lebanese people in recovering from the tragedy and rebuilding their lives,” a statement by the U.S. Embassy said. He will also stress the “urgent need” for embracing fundamental reforms.

Bob Woodward’s New Trump Book, ‘Rage,’ Due Out Next Month