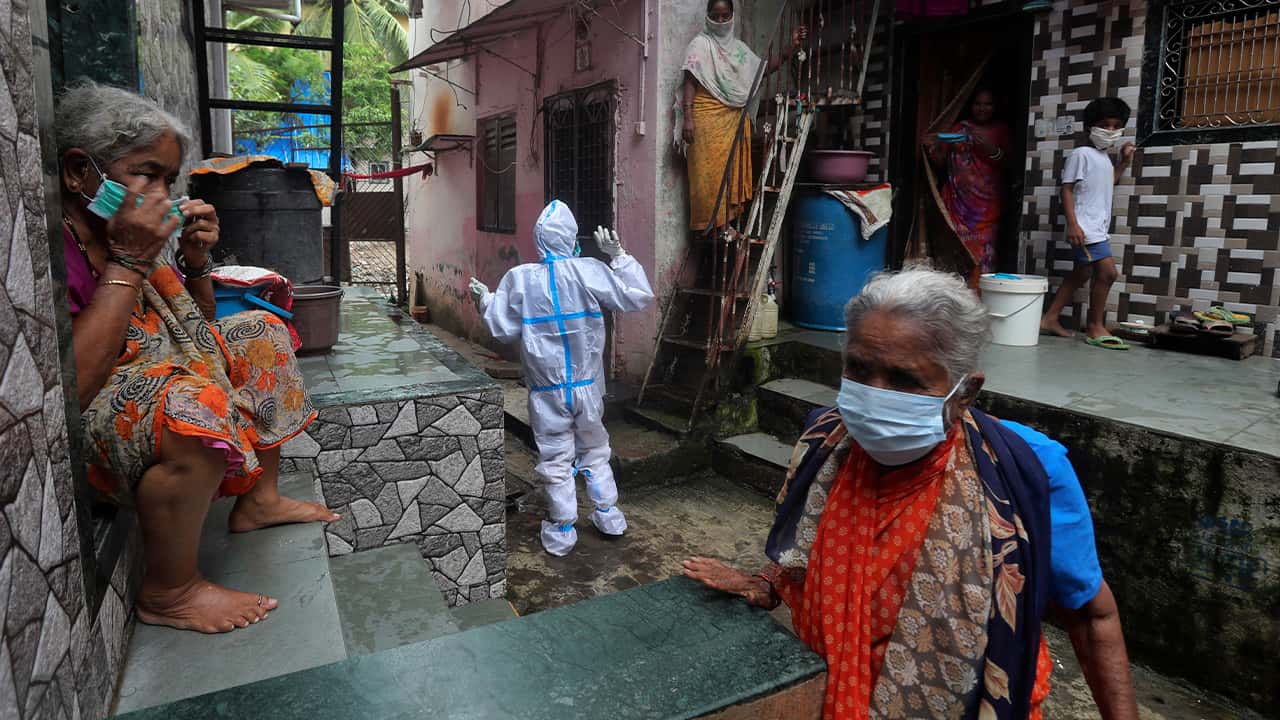 ROME — The number of confirmed coronavirus cases worldwide topped 20 million, more than half of them from the United States, India and Brazil, as Russia on Tuesday became the first country to approve a vaccine against the virus.

Russian President Vladimir Putin said that one of his two adult daughters had already been inoculated with the cleared vaccine, which he described as effective. “She’s feeling well and has a high number of antibodies,” Putin said.

Russian President Vladimir Putin said that one of his two adult daughters had already been inoculated with the cleared vaccine, which he described as effective. “She’s feeling well and has a high number of antibodies,” Putin said.

Russia has reported more than 890,000 cases, the fourth-highest total in the world, according to a Johns Hopkins University tally that also showed total confirmed cases globally surpassing 20 million.

It took six months or so to get to 10 million cases after the virus first appeared in central China late last year. It took just over six weeks for that number to double.

An AP analysis of data through Aug. 9 showed the U.S., India and Brazil together accounted for nearly two-thirds of all reported infections since the world hit 15 million coronavirus cases on July 22.

Health officials believe the actual number of people infected with the virus is much higher than the tally kept by Johns Hopkins University, given testing limitations and that as many as 40% of those with the virus show no symptoms.

As a result, the race to develop and deliver a vaccine has topped the global health care and geopolitical agenda, even as the United Nations has warned that any vaccine must be safe and made available to all, not just the wealthy.

In Europe, Countries That Appeared to Have Gotten Their Outbreaks Under Control During Nationwide Lockdowns

Putin said the Russian vaccine underwent the necessary tests and offered a lasting immunity from the coronavirus. But scientists at home and abroad have warned that rushing to start using the vaccine before Phase 3 trials — which normally last for months and involve thousands of people — could backfire.

“The point is not to be first with a vaccine,” U.S. Health and Human Services Secretary Alex Azar said Tuesday during a visit to Taiwan when asked about the Russian vaccine. “The point is to have a vaccine that is safe and effective for the American people and the people of the world.”

The U.S. has a half-dozen vaccine candidates under development, China has begun inoculations with an experimental vaccine and European countries have several trials underway.

In Europe, countries that appeared to have gotten their outbreaks under control during nationwide lockdowns and lifted many public restrictions worked to prevent a resurgence of the virus. Finland joined France and Germany in announcing it would test travelers from at-risk countries upon arrival.

Spain, which along with Italy was hardest hit when the virus first exploded on the continent, now has the most confirmed cases in western Europe at nearly 323,000. The number of new cases has risen steadily in Spain since its strict, three-month lockdown ended on June 21, reaching 1,486 on Monday.

In Greece, which imposed strict lockdown measures early and kept its reported cases low during the height of the European epidemic, the government announced new measures Monday to prevent an outbreak. It ordered bars, restaurants and cafes in several regions to shut between midnight and 7 a.m.

The number of new cases reported daily continues to rise in India, hitting a rolling seven-day average of 58,768. In the U.S., which so far has more than 5 million confirmed cases, the daily average has decreased since July 22nd, but remains high at over 53,000. In this handout photo taken on Thursday, Aug. 6, 2020, and provided by Russian Direct Investment Fund, an employee shows a new vaccine at the Nikolai Gamaleya National Center of Epidemiology and Microbiology in Moscow, Russia. Russia on Tuesday, Aug. 11 became the first country to approve a coronavirus vaccine for use in tens of thousands of its citizens despite international skepticism about injections that have not completed clinical trials and were studied in only dozens of people for less than two months. (Alexander Zemlianichenko Jr/ Russian Direct Investment Fund via AP)

Caseloads Are Still Rising Quickly in Many Other Countries, Including Indonesia and Japan

South Africa has more than a half-million cases. In the country with the world’s largest number of HIV-positive people, the virus has disrupted the supply of antiretroviral drugs that a United Nations agency says could lead to 500,000 additional AIDS-related deaths.

In the 45 days it took reported coronavirus cases worldwide to double to 20 million, the number of reported virus deaths climbed to 736,191 from 499,506, according to the Johns Hopkins count, an average of more than 5,200 a day.

Caseloads are still rising quickly in many other countries, including Indonesia and Japan.

In Mexico, President Andrés Manuel López Obrador, like Brazil’s President Jair Bolsonaro and U.S. President Donald Trump, seldom wears a mask and has resisted calls for a strict lockdown, saying Mexicans should be persuaded to observe social distancing, not forced to do so by police or fines.

With nearly 500,000 cases and more than 50,300 deaths, Mexico has struggled with how to curb outbreaks given that just over half its people work off the books with no benefits or unemployment insurance.

A full lockdown would prove too costly for people with little savings and tenuous daily incomes, said Assistant Health Secretary Hugo López-Gatell, the president’s point man on the epidemic.

“We do not want a solution that would, in social terms, be more costly than the disease itself,” he said.

Mexico’s relatively high death rate results partly from the country having one of the world’s highest rates of obesity and diabetes. There has also been relatively little testing. Of all tests done, 47% are positive, suggesting that only seriously ill people are getting tests. That has hindered contract tracing.

New Zealand, which has been praised for quickly getting the virus under control, on Tuesday reported the first cases of local transmission in the country in 102 days. Prime Minister Jacinda Ardern said authorities found four cases of the coronavirus in one Auckland household from an unknown source.

India reported 53,601 new cases Tuesday as its count of total infections neared 2.3 million. Its reported case mortality rate, at 2%, is much lower than in the U.S. and Brazil.

Vietnam went from having reported no confirmed deaths and very few cases to battling fresh outbreaks that emerged in the seaside city of Danang.

New Zealand, which has been praised for quickly getting the virus under control, on Tuesday reported the first cases of local transmission in the country in 102 days. Prime Minister Jacinda Ardern said authorities found four cases of the coronavirus in one Auckland household from an unknown source.

Meanwhile, outbreaks in mainland China and semi-autonomous Hong Kong declined, with the number of new community infections in China falling to 13, all in the northwestern region of Xinjiang. Hong Kong counted 69 new cases.

Border closures, masks, lockdowns and infection data are now the new way of life for much of the world, not the politically combustible topics they are in the U.S.

A review by the Kaiser Health News service and The Associated Press found that at least 49 state and local public health leaders have resigned, retired or been fired since April across 23 states. The list has grown by more than 20 people since the AP and KHN started keeping track in June.

California Quake Alerts to Be Standard on Android Phones