The twin executive orders Thursday — one for each app — add to growing U.S.-Chinese conflict over technology and security. They take effect in 45 days and could bar the apps from the Apple and Google app stores, effectively removing them from U.S. distribution. U.S. experts expressed skepticism about its legal authority.

The twin executive orders Thursday — one for each app — add to growing U.S.-Chinese conflict over technology and security. They take effect in 45 days and could bar the apps from the Apple and Google app stores, effectively removing them from U.S. distribution. U.S. experts expressed skepticism about its legal authority.

China’s foreign ministry said it opposed the move but gave no indication whether Beijing might retaliate.

“This is a pretty broad and pretty quick expansion of the technology Cold War between the U.S. and China,” said Steven Weber, faculty director for the Berkeley Center for Long Term Cybersecurity.

Earlier, Trump threatened a deadline of Sept. 15 to “close down” TikTok in the United States unless Microsoft Corp. or another company acquires it.

TikTok, owned by Beijing-headquartered ByteDance Ltd., is popular for its short, catchy videos. The company says it has 100 million users in the United States and hundreds of millions worldwide. WeChat, known in Chinese as Weixin, is a critical communications app with more than 1 billion users. Around the world, many people of Chinese descent use WeChat to stay in touch with friends and family and to conduct business in mainland China.

The Trump administration has expressed concern Chinese companies could provide American users’ personal information to Chinese authorities, though it has given no evidence TikTok did that. TikTok has said repeatedly that it doesn’t store American user data in China and never has given it to Beijing or censored content at the government’s request.

Leading mobile security experts say TikTok is no more intrusive in its harvesting of user data and monitoring of user activity than U.S. apps owned by Facebook and Google. And the order doesn’t seem to ban Americans from using TikTok, which would be nearly impossible to enforce, said Kirsten Martin, a professor of technology ethics at the University of Notre Dame. 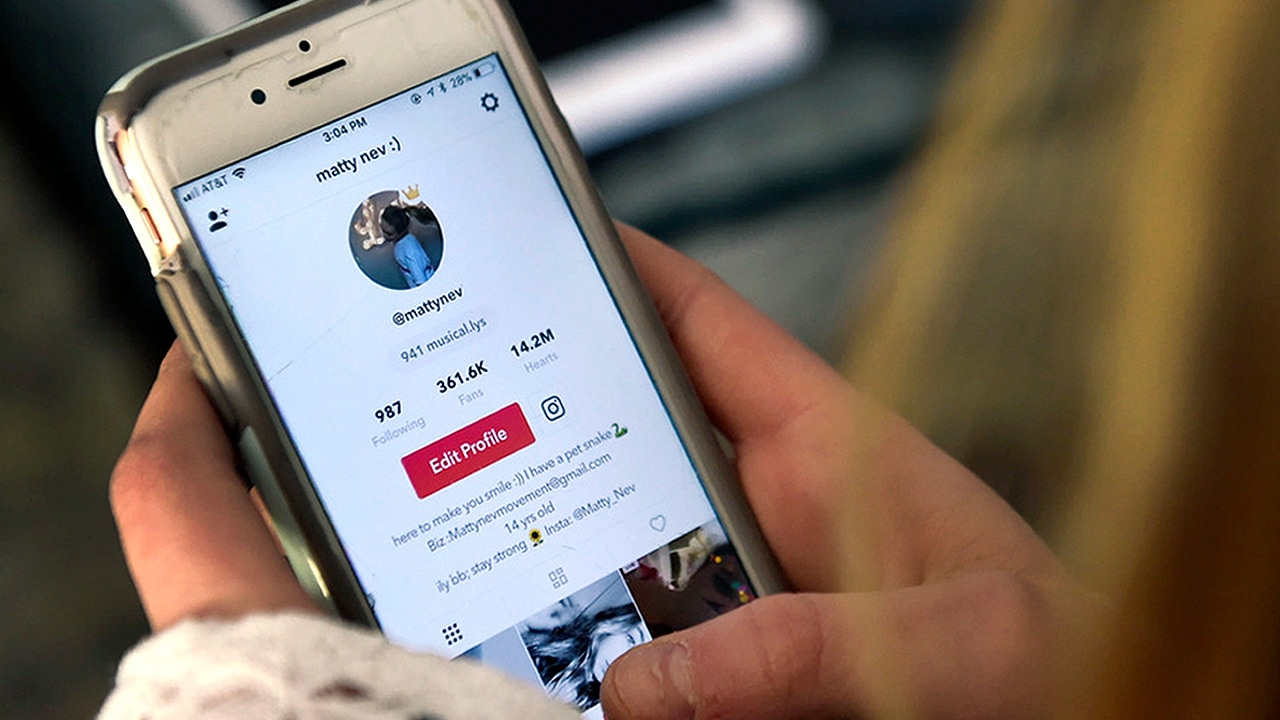 In this Feb. 28, 2018 photo, Matty Nev Luby holds her phone and logs into the lip-sync smartphone app Musical.ly, in Wethersfield, Conn. Teens and young adults say cyberbullying is a serious problem for people their age, but most don’t think they’ll be the ones targeted for digital abuse. The high school gymnast’s popularity on the lip-syncing app Musical.ly, which merged this summer into the Chinese video-sharing app TikTok, helped win her some modeling contracts. Luby said she’s learned to navigate Instagram and other social media apps by brushing aside the anonymous bullies. (AP Photo/Jessica Hill)

Within China, Wechat Is Censored and Expected to Adhere to Content Restrictions

“The U.S. thinking is that anything that is Chinese is suspect,” said Andy Mok, a senior research fellow at the Center for China and Globalization in Beijing. “They’re being targeted not because of what they’ve done, but who they are.”

In a statement, TikTok expressed shock at the order and complained it violates U.S. law. TikTok said the Trump administration has “paid no attention to facts,” tried improperly to insert itself into business negotiations. The company said it would “pursue all remedies” and suggested it would sue to ensure the company and its users are “are treated fairly.”

Tencent said it’s “reviewing the executive order to get a full understanding.” Microsoft declined to comment.

On Friday, shares of WeChat’s owner, Tencent Holding Ltd., declined 5% in trading in Hong Kong. Tencent, Asia’s most valuable tech company with a market capitalization of $650 million, makes most of its money from online games and entertainment in China.

Within China, WeChat is censored and expected to adhere to content restrictions set by authorities. The Citizen Lab internet watchdog group in Toronto says WeChat monitors files and images shared abroad to aid its censorship in China.

Tencent also owns stakes in major game companies such as Epic Games, publisher of Fortnite, a major video game hit, and Riot Games, which is behind League of Legends. It’s not clear if and how the order would affect those operations.

On Wednesday, Secretary of State Mike Pompeo foreshadowed the executive orders when he announced an expansion of the U.S. crackdown on Chinese technology to include barring Chinese apps from U.S. app stores, citing alleged security threats and calling out TikTok and WeChat by name.

Trump’s orders say the Chinese-owned apps “threaten the national security, foreign policy, and economy of the United States.” They cite the International Emergency Economic Powers Act and the National Emergencies Act and call on the Commerce secretary to define the banned dealings by Sept. 15.

In China, the Communist Party limits what foreign tech companies can do and blocks access to the Google search engine, Facebook, Twitter and other social media, along with thousands of websites operated by news organizations and human rights, pro-democracy and other activist groups.

The Trump administration already was embroiled in a tariff war with Beijing over its technology ambitions. Washington has blocked acquisitions of some U.S. assets by Chinese buyers and has cut off most access to American components and other technology for Huawei Technologies Ltd., a maker of smartphones and network equipment that is China’s first global tech brand.

And China-backed hackers have been blamed for breaches of U.S. federal databases and the credit agency Equifax.

The Chinese foreign ministry accused Washington of “political manipulation” and said the moves will hurt American companies and consumers.

“The United States is using national security as an excuse, frequently abuses national power and unreasonably suppresses companies of other countries,” said a ministry spokesman, Wang Wenbin. “This is an outright hegemonic act. China is firmly opposed to it.”

Wang, who didn’t mention TikTok or any other company by name, called on the Trump administration to “correct its wrongdoing” but gave no indication how Beijing might respond.

In China, the Communist Party limits what foreign tech companies can do and blocks access to the Google search engine, Facebook, Twitter and other social media, along with thousands of websites operated by news organizations and human rights, pro-democracy and other activist groups.

The ruling party has used the entirely state-controlled press to encourage public anger at Trump’s actions.

“I don’t want to use American products anymore,” said Sun Fanyu, an insurance salesperson in Beijing. “I will support domestic substitute products.”