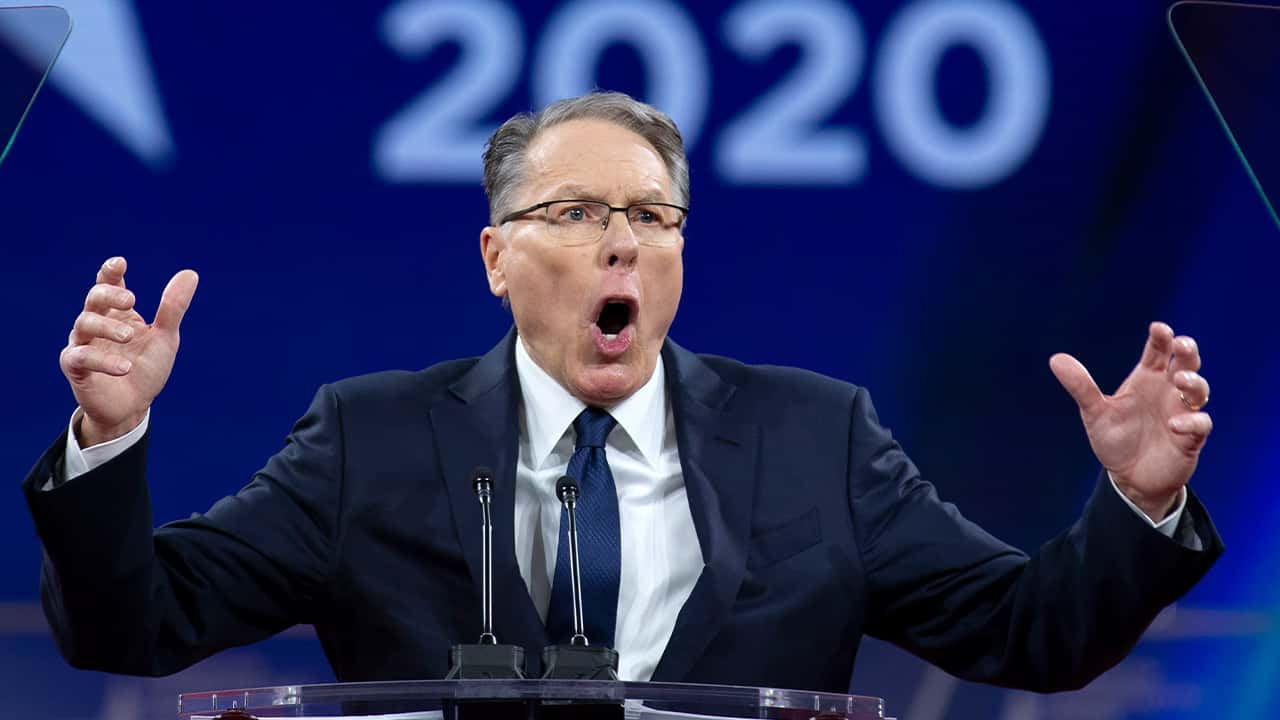 New York’s attorney general sued the National Rifle Association on Thursday, seeking to put the powerful gun advocacy organization out of business over allegations that high-ranking executives diverted millions of dollars for lavish personal trips, no-show contracts for associates and other questionable expenditures.

Attorney General Letitia James’ lawsuit, filed in state court in Manhattan after an 18-month investigation, highlighted misspending and self-dealing allegations that have roiled the NRA and its longtime leader, Wayne LaPierre, in recent years — from hair and makeup for his wife to a $17 million post-employment contract for himself.

Attorney General Letitia James’ lawsuit, filed in state court in Manhattan after an 18-month investigation, highlighted misspending and self-dealing allegations that have roiled the NRA and its longtime leader, Wayne LaPierre, in recent years — from hair and makeup for his wife to a $17 million post-employment contract for himself.

The troubles, which James said were long cloaked by loyal lieutenants and a pass-through payment arrangement with a vendor, started to come to light as the NRA’s deficit piled up and it struggled to find its footing after a spate of mass shootings eroded support for its pro-gun agenda. The organization went from a nearly $28 million surplus in 2015 to a $36 million deficit in 2018.

James, a Democrat, argued that the organization’s prominence and cozy political relationships had lulled it into a sense of invincibility and enabled a culture where non-profit rules were routinely flouted and state and federal laws were violated. Even the NRA’s own bylaws and employee handbook were ignored, she said.

“The NRA’s influence has been so powerful that the organization went unchecked for decades while top executives funneled millions into their own pockets,” James said in a statement announcing the lawsuit. “The NRA is fraught with fraud and abuse, which is why, today, we seek to dissolve the NRA, because no organization is above the law.”

A message seeking comment from the NRA about the lawsuit was left Thursday.

James is taking aim at the NRA after her office last year dismantled President Donald Trump’s charitable foundation and fined him $2 million to settle allegations he used donations meant for worthy causes to further his own business and political interests. Though it is headquarters in Virginia, the NRA was chartered as a non-profit in New York in 1871 and continues to be incorporated in the state.

James also named LaPierre and three other current and former executives as defendants: corporate secretary and general counsel John Frazer, retired treasurer and chief financial officer Wilson Phillips, and LaPierre’s former chief of staff Joshua Powell. While the lawsuit accuses all four men of wrongdoing and seeks fines and remuneration, none of them have been charged with a crime.

LaPierre, who has been in charge of the NRA’s day-to-day operations since 1991, is accused of spending millions of dollars on private travel and personal security, accepting expensive gifts such as African safaris and use of a 107-foot yacht from vendors and setting himself up with a $17 million contract with the NRA, if he were to exit the organization, without board approval.

The lawsuit said LaPierre, 70, spent millions of the NRA’s dollars on travel consultants, including luxury black car services, and hundreds of thousands of dollars on private jet flights for himself and his family, including more than $500,000 on eight trips to the Bahamas over a three-year span.

Some of the NRA’s excess spending was kept secret, the lawsuit said, under an arrangement with the organization’s former advertising agency, Ackerman McQueen.

The advertising firm would pick up the tab for various expenses for LaPierre and other NRA executives and then send a lump sum bill to the organization for “out-of-pocket expenses,” the lawsuit said.

Frazer, the corporate secretary and general counsel, is accused of aiding the alleged misconduct by certifying false or misleading annual regulatory filings, failing to comply with governance procedures, failing to enforce a conflict of interest policy, and failing to ensure that board members were reviewing transactions or that the the organization was following the law.

Phillips is accused of overseeing the pass-through arrangement. The lawsuit said he ignored or downplayed whistleblower complaints and made a deal to enrich himself in retirement — a bogus $1.8 million contract to consult for the incoming treasurer and a deal worth $1 million for his girlfriend.

The internal battles reached a fevered pitch at its 2019 annual meeting where its then-president, Oliver North, was denied a traditional second term amid a tussle with LaPierre as he sought to independently review the NRA’s expenses and operations. He accused LaPierre of exerting “dictatorial” control.

Powell, the former LaPierre chief of staff, is accused of getting his father a $90,000 photography gig through an NRA vendor, arranging a $5 million contract for a consulting firm where his wife worked and pocketing $100,000 more in housing and relocation reimbursements than the organization’s rules allowed. He was fired after 3½ years for allegedly misappropriating NRA funds.

The lawsuit comes at a time when the NRA is trying to remain relevant and a force in the 2020 presidential election as it seeks to help President Donald Trump secure a second term.

There has been an ongoing factional war within organization, pitting some of its most ardent gun-rights supporters and loyalists against one another. The NRA has traded lawsuits with Ackerman McQueen, which crafted some of its most prominent messages for decades, eventually severing ties with it last year and scrapping its controversial NRA-TV, which aired many of its most controversial messages.

The internal battles reached a fevered pitch at its 2019 annual meeting where its then-president, Oliver North, was denied a traditional second term amid a tussle with LaPierre as he sought to independently review the NRA’s expenses and operations. He accused LaPierre of exerting “dictatorial” control.

Chris Cox, the NRA’s longtime lobbyist and widely viewed as a likely successor to LaPierre, left after being accused of working behind the scenes with North to undermine LaPierre.

‘See You in Court’: ACLU Files Nearly 400 Cases Versus Trump