Detention Billiards was forced to shut down for three months during the initial phase of the COVID-19 pandemic. Owner Tim Ferrigan then re-opened for three weeks before having to shut down again.

His frustrations have spilled onto several chalk signs in the windows of his shuttered Tower District business.

Some people think they’re humorous, while others take offense and say they’ll never visit his establishment.

GV Wire℠ drove to see the signs firsthand. Just as we pulled up, Ferrigan arrived to place a new sign and agreed to an interview.

Ferrigan says he’s lost about 25% of his annual revenue. When he does get to open again, he thinks it’ll take a while before the business returns to pre-pandemic income levels.

Signs: The Eye of the Beholder

“Humor. I’ve been putting up signs since I opened,” Ferrigan said. “Apparently there’s some triggering happening with snowflakes, but that’s going to happen anyway. The stats just aren’t supporting it in my opinion, but what are you going to do?” Ferrigan says it’s been very tough on his nine employees who thought they had long-term jobs but are again on unemployment.

As for the inspiration behind the signs? Ferrigan’s short answer, “I just make them up.” A sign directed at Gov. Gavin Newsom in the lobby of Detention Billiards. (GV Wire/Jim Jakobs)

“Do you really think Gavin’s really going to listen to anybody but God in his head? No. The emperor is going to make his edicts.”

Not Worried About Reaction to Signs

Ferrigan doesn’t appear to care about the reaction his signs inspire.

“I don’t even check Facebook. I haven’t done it in years,” said Ferrigan. “Most people think the signs are funny and they always have. I change them out every month or two.”

“This is Detention Billiards, so this is like high school detention. The chalkboards? That’s where the idea came from.”

“Normalcy,” was Ferrigan’s response as to what he hopes will lead to a reopening. 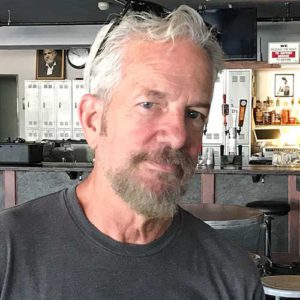 “Do you really think Gavin’s really going to listen to anybody but God in his head? No. The emperor is going to make his edicts.”–Tim Ferrigan, Detention Billiards owner

He tried offering the types of food that would have followed state guidance for restaurants. He said that unfortunately chicken wings and fries didn’t meet the state’s mandates.

Ferrigan believes the governor was upset because of how some bars interpreted what the California Department of Health was looking for.

“The governor got butthurt because some of the bars were taking a literal translation of what restaurant food was. So some bars were selling a bag of chips and that was it. Then you could also drink,” said a clearly frustrated Ferrigan.

Related Story: It’s Official: Buffalo Wings Are No Longer a Meal in California

On June 28, the state issued an order closing all bars on the state’s monitoring list. Fresno County is on that list.

The section of the order that applied to Detention Billiards is specified in the first bullet point of the order:

“Brewpubs, breweries, bars, and pubs, should close until those establishments are allowed to resume operation per state guidance and local permission, unless they are offering sit-down, dine-in meals. Alcohol can only be sold in the same transaction as a meal.”

“Freedom of speech. Good for them. Don’t agree? You don’t have to go there. I wouldn’t either if I were you because you might encounter someone without a mask,” wrote Bev Janzen.

But, the sign drawing the strongest opposition was the one with the 1-800 number listed. It’s the number for the National Suicide Prevention Lifeline.

Katie Tate writes, “I won’t support a business who tells people to go kill themselves all the other signs are funny but suicide is not a joke. …”

Gilliann Hensley wrote, “Imagine being this willfully ignorant. Another business to never go to again.”

A Cooldown, a Warmup, and Then Nirvana for Fresno