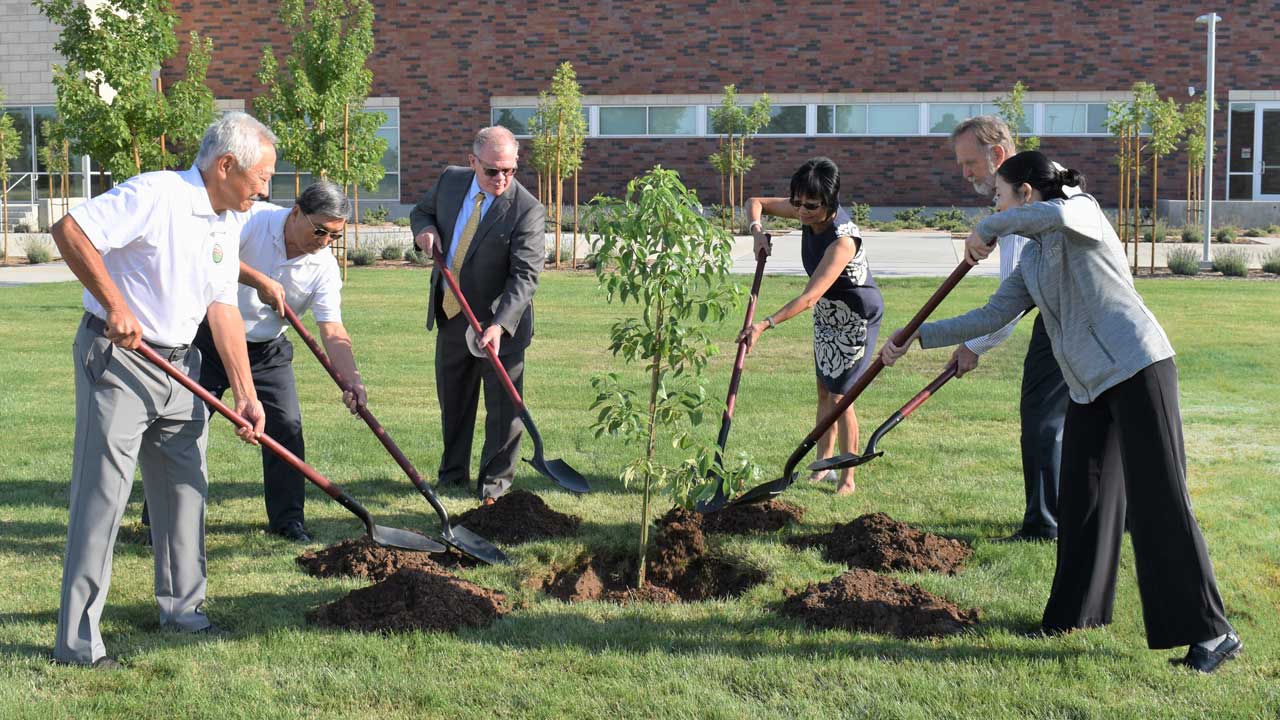 A descendant of a tree that survived the atomic blast from the U.S. bombing of Hiroshima, Japan has been planted in Clovis to commemorate the devastating wartime event 75 years ago.

The “Hiroshima Peace Tree” was grown from a seed harvested from a camphor tree located less than a mile from the detonation point. It will now grow on the grounds of California Health Sciences University’s new medical school campus. Photo shows area near Hiroshima Castle after the United States dropped an atomic bomb over the city in 1945. A sapling from a surviving tree located just outside the castle grounds has been planted on the CHSU campus as a remembrance of the bombing. (Australian War Memorial)

“We are honored to have living history growing in the new Peace Garden at our medical school for the CHSU campus community to appreciate,” said CHSU president Florence Dunn, in a news release.

Hiroshima was destroyed by the first nuclear weapon used in a war. It was nicknamed “Little Boy,”  and was dropped by the U.S. bomber Enola Gay on August 6, 1945, in an effort to force Japan’s surrender in World War II.

Three days later, another atomic bomb was dropped on the Japanese city of Nagasaki.

“When I was a child, the universe I lived in and trusted suddenly disappeared,” said Dr. Hideko Tamura-Snider, a Hiroshima bombing survivor who took part in the tree-planting ceremony. “What I learned was that the physical world can be destroyed, but what makes us human cannot be destroyed,” she said. A sapling derived from this “survivor tree” in Hiroshima, Japan has been planted on the California Health Sciences University campus to commemorate the 1945 atomic bombing of the city.

Tamura-Snider has been actively involved in the effort to spread the seeds of hibakujumoku (a Japanese term meaning atomic bombed tree) and encourage peace and reconciliation to promote a world free of nuclear weapons.

Only 170 Trees in City Survived Bombing

CHSU’s sapling came from one of only 170 trees in the city of Hiroshima that survived the bombing. The parent Cinnamomum camphora tree is located next to Hiroshima Castle, less than a mile from where the atomic bomb detonated.  The tree is still bent due to the force of the blast, according to information posted on the website for the Green Legacy Hiroshima project.

The seeds were collected in 2015 and trees from the project are now growing in more than 30 countries, the organization says.

A plaque displayed at the base of the Hiroshima Peace Tree at CHSU includes a QR code that links to the website displaying the location of other hibakujumoku planted around the world.

“This Hiroshima Peace tree will be a lasting symbol of peace, hope, and resilience and we are proud to place the Central Valley on the worldwide map for this initiative,” Dunn said.

CHSU officials said seedlings are available for planting more of the trees within the Central Valley. Interested groups or organizations should contact CHSU via email at info@chsu.edu.

(Granville Homes President and CEO Darius Assemi is the publisher of GV Wire and a member of CHSU’s Board of Trustees.)