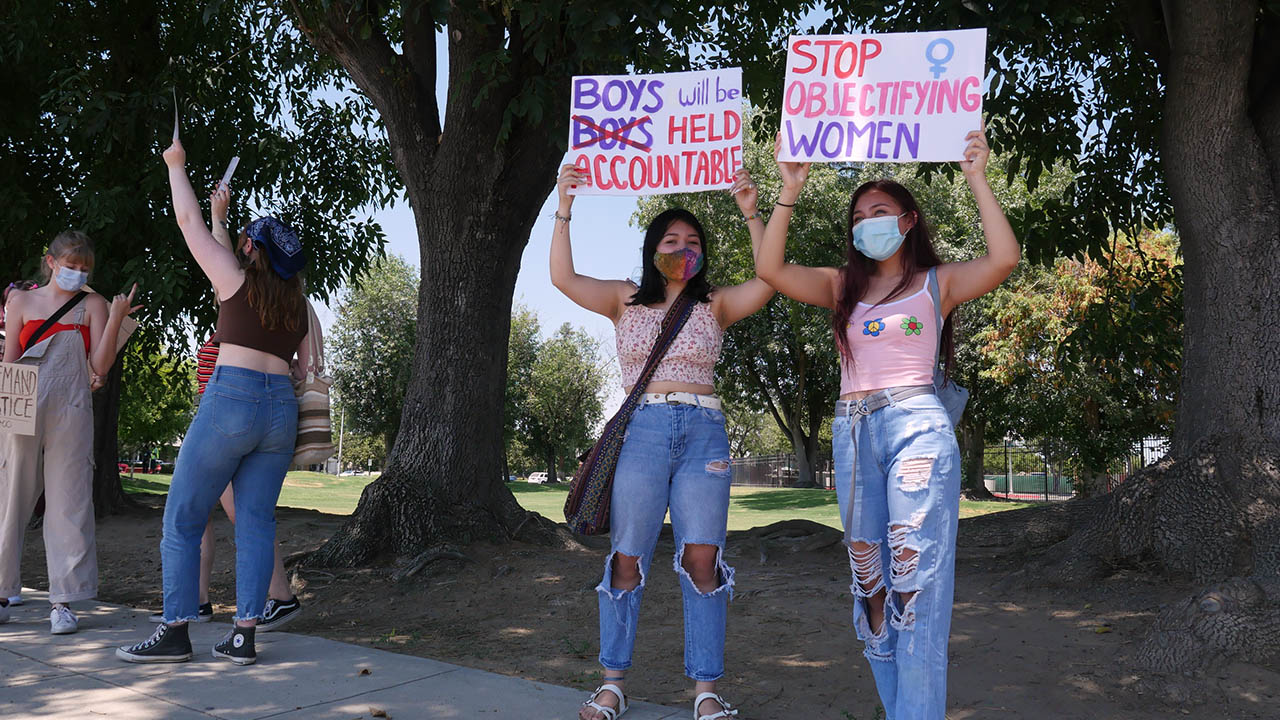 A woman who went public with her story about an alleged sexual assault at Fresno State sought justice on Monday.

According to the victim and her mother — neither who wanted to be identified by the media despite the YouTube videos posted by the alleged victim — Fresno State held a Title IX compliance hearing today.

The hearings are campus tribunals to determine such issues as whether a sexual assault took place and what the consequences should be.

The university would not confirm whether the hearing took place.

In solidarity, more than 100 people protested for the #MeToo movement at the entrance of the campus.

“It has been very difficult. It’s been a tragedy for me, for the whole family,” the victim’s mother said.

In March, the alleged victim, who was 17 at the time and is now 18, went on YouTube to accuse members of the Kappa Sigma fraternity of sexual assault at the fraternity house. She additionally accused an individual member of the fraternity of rape at a home in Sanger during a Super Bowl party later that weekend.

According to police, the alleged Feb. 1 incident was reported on April 22. The report listed two suspects. Their names have not been made public by law enforcement.

“There are several factors that can slow the investigation of a sexual assault case and most of those revolve around the availability of physical evidence,” Fresno police spokesman Sgt. Jeff LaBlue said via email.  “Often times evidence is destroyed when time passes based on the PTSD the survivor suffers through, causing there to be a delay in reporting the crime. That delay can cause physical evidence to erode.”

The case is now with the district attorney’s office. No arrests or citations have been made.

“The case has been received by our office and is pending investigation and review,” Fresno County District Attorney spokesman Jerry Stanley said via email.

Sanctions for Fraternity, Criticism for Castro

The university suspended Kappa Sigma through the end of the year, with sanctions preventing the hosting of activities through May 31, 2021.

In her videos, the victim detailed the incidents and talked about how many people attempted to dissuade her from reporting it to authorities.

In a second video posted in June, the alleged victim criticized Fresno State President Joseph Castro and the university’s handling of her case.

“You do not deserve to hold a leadership position as the president of Fresno State,” she said.

Castro defended his response to the alleged sexual assault in an online statement today.

“Acts of sexual assault are reprehensible, regardless of location and circumstances; I condemn them vigorously. We take reported assaults very seriously and will continue to do everything in our power to protect and support victims, as evidenced by … (our) actions in this particular case,” Castro said.

“In situations where the University is made aware of allegations of a sexual assault of a student at an off-campus location, the Fresno State Police Department will cooperate with local law-enforcement agencies who are responsible for investigating cases, if the alleged incidents occurred within their jurisdiction.”

After the hearing today, the alleged victim told GV Wire℠ she is arranging to meet with Castro.

Mother of Victim Says Little Has Changed at Fresno State

The victim’s mother criticized those who told her daughter not to pursue justice and attacked her on social media.

“I know my daughter has been the victim. She’s been victim shamed for coming out and speaking the truth. And for me, it’s very disappointing,” the mother said.

The mother said not much has changed in attitudes towards rape from when she was a student at Fresno State 35 years ago. 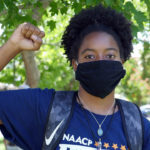 “It was heartbreaking to know that she was 17, 18 during the time her first year of college experience, leaning on people to support her, and they just weren’t there.” — D’Aungillique Jackson, president of the Fresno State chapter of the NAACP

The victim did not attend the protest until late because she was at her hearing, which she said was conducted confidentially via Zoom.

But, more than 100 people were at the protest, holding signs while lining the sidewalk. Cars driving by on Shaw Avenue honked in approval. The protesters later marched to fraternity row.

The victim said she appreciated their support.

“I want victim-blaming never to be OK,” she said. “If you victim blame, you are just as disgusting as the rapists.”

Maria Martinez, a friend of the alleged victim, came to support the woman she said is “like a sister.”

“She’s getting a lot of backlash. But I mean, that’s only expected when you go public with any situation that someone goes through,” Martinez said.

Kayla Streeter of Fresno came out to support women’s rights.

“I think Fresno State President Castro has tried to do his best to push sexual assault awareness, but it’s mainly on the students and the powers that be in charge of organizations on this campus, as well as our faculty and staff at the bottom of the chain, to be holding themselves account accountable,” said the group’s president, D’Aungillique Jackson.

“It was heartbreaking to know that she was 17, 18 during the time her first year of college experience, leaning on people to support her and they just weren’t there.” Jackson said. “Instead of uplifting her and seeing what services they could offer, they silenced her until the very last moment.”

[Update, 8/03/2020 6:10 p.m. This story has been updated to include the alleged victim agreeing to meet with President Joseph Castro. Also, the fraternity suspended was Kappa Sigma, not Sigma Kappa as originally reported.] What Will Online Learning Look Like This Time for Fresno Unified Students?