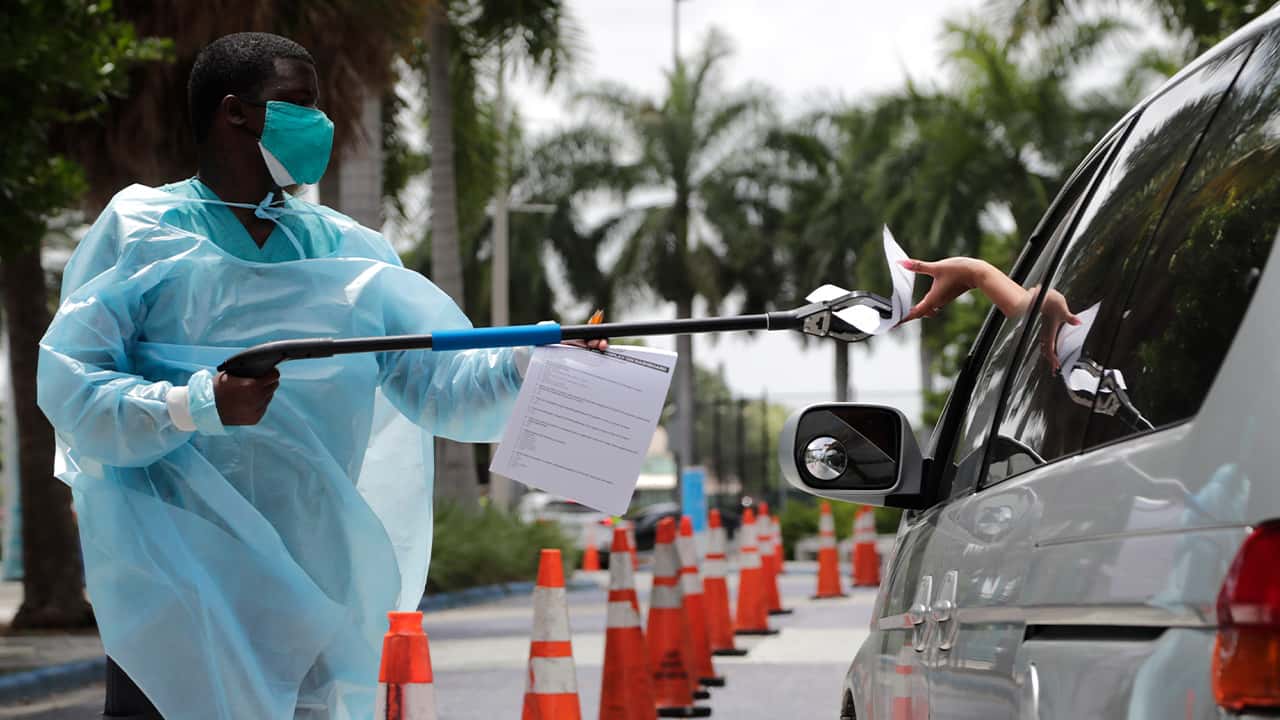 NEW YORK — While deaths from the coronavirus in the U.S. are mounting rapidly, public health experts are seeing a flicker of good news: The second surge of confirmed cases appears to be leveling off.
Scientists aren’t celebrating by any means, warning that the trend is driven by four big, hard-hit places — Arizona, California, Florida and Texas — and that cases are rising in close to 30 states in all, with the outbreak’s center of gravity seemingly shifting from the Sun Belt toward the Midwest.
Some experts wonder whether the apparent caseload improvements will endure. Nor is it clear when deaths start coming down. COVID-19 deaths do not move in perfect lockstep with the infection curve, for the simple reason that it can take weeks to get sick and die from the virus.
The future? “I think it’s very difficult to predict,” said Dr. Anthony Fauci, the government’s foremost infectious-disease expert.
The virus has claimed over 150,000 lives in the U.S., by far the highest death toll in the world, plus more than a half-million others around the globe.
Over the past week, the average number of deaths per day in the U.S. has climbed more than 25%, from 843 to 1,057. Florida on Thursday reported 253 more deaths, setting its third straight single-day record. The number of confirmed infections nationwide has topped 4.4 million. 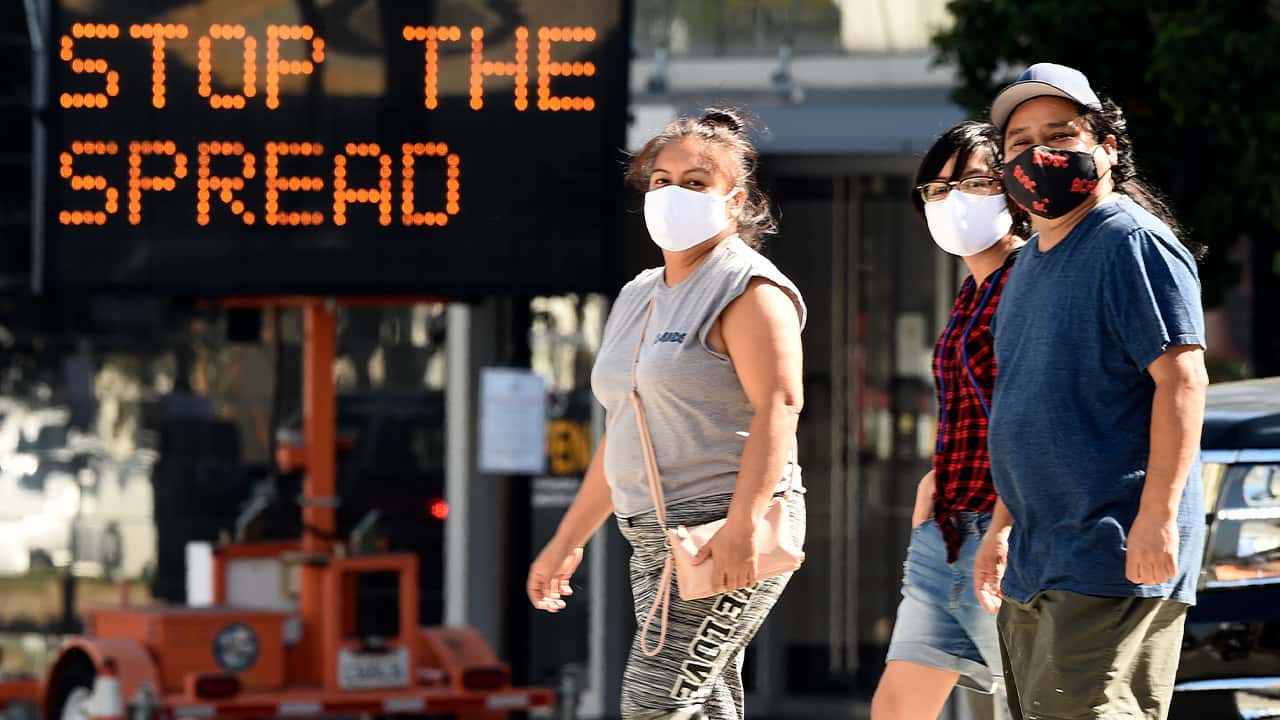 FILE – Pedestrians wear masks as they walk in front of a sign reminding the public to take steps to stop the spread of coronavirus, Thursday, July 23, 2020, in Glendale, Calif. Los Angeles County is seeing some hopeful signs amid the coronavirus surge. The county reported Wednesday that COVID-19 hospitalization and transmission rates are dropping. (AP Photo/Chris Pizzello, File)

— The collateral damage from the virus mounted, with the U.S. economy shrinking at a dizzying 32.9% annual rate in the April-June quarter — by far the worst quarterly plunge on records dating to 1947. And more than 1.4 million laid-off Americans applied for unemployment benefits last week, further evidence that employers are still shedding jobs five months into the crisis.
— Amid the outbreak and the bad economic news, President Donald Trump for the first time publicly floated the idea of a delay in the Nov. 3 presidential election, warning without evidence that increased mail-in voting will result in fraud. Changing Election Day would require an act of Congress.
— Herman Cain, the former pizza-chain CEO who in 2012 unsuccessfully sought to become the first Black candidate to win the Republican nomination for president, died of complications from the virus at 74.
Based on a seven-day rolling average, daily cases of the coronavirus in the U.S. fell from 67,317 on July 22 to 65,266 on Wednesday, according to data kept by Johns Hopkins University. That is a decline of about 3%.
Researchers prefer to see two weeks of data pointing in the same direction to say whether a trend is genuine. “But I think it is real, yes,” said Ira Longini, a University of Florida biostatistician who has been tracking the coronavirus and has been a source of disease forecasts used by the government.
The Associated Press found the seven-day rolling average for new cases plateaued over two weeks in California and decreased in Arizona, Florida and Texas.
The trends in Arizona, Texas and Florida are “starting to bend the curve a bit,” said Jennifer Nuzzo, a Johns Hopkins public health researcher. Those states, along with California, have been pouring large numbers of cases each day into the national tally. So when those places make progress, the whole country look better, she said.

Also, in another possible glimmer of hope, the percentage of tests that are coming back positive for the virus across the U.S. dropped from an average of 8.5% to 7.8% over the past week.
The latest surge in cases became evident in June, weeks after states began reopening following a deadly explosion of cases in and around New York City in the early spring. Daily case counts rose to 70,000 or more earlier this month. Deaths, too, began to climb sharply, after a lag of a few weeks.
Some researchers believe that the recent leveling off is the result of more people embracing social distancing and other precautions.
“I think a lot of it is people wearing masks because they’re scared,” Longini said.
But Dr. Ali Khan, dean of the University of Nebraska College of Public Health said the trend could also be due to natural dynamics of the virus that scientists to do not yet understand.
Without robust testing and other measures to keep the virus in check, a third peak is possible — or even likely — given that only an estimated 10% of Americans have been infected so far, experts said. And there’s no reason to believe the peak can’t be larger than the first two.
“This disease will continue to hopscotch around until it finds tinder — susceptible individuals — like any good fire,” said Khan, a former top infectious-disease outbreak investigator at the Centers for Disease Control and Prevention.
Fauci said he is “somewhat comforted” by the recent plateau. But a stabilization of case at around 60,000 is “still at a very high level.” He said he is also worried about rising percentages of tests coming back positive in states like Ohio, Kentucky, Tennessee and Indiana.
“That’s a warning sign that you might be seeing a surge,” Fauci said. “They’ve really got to jump all over that.”

Can the Coronavirus Spread Through the Air?