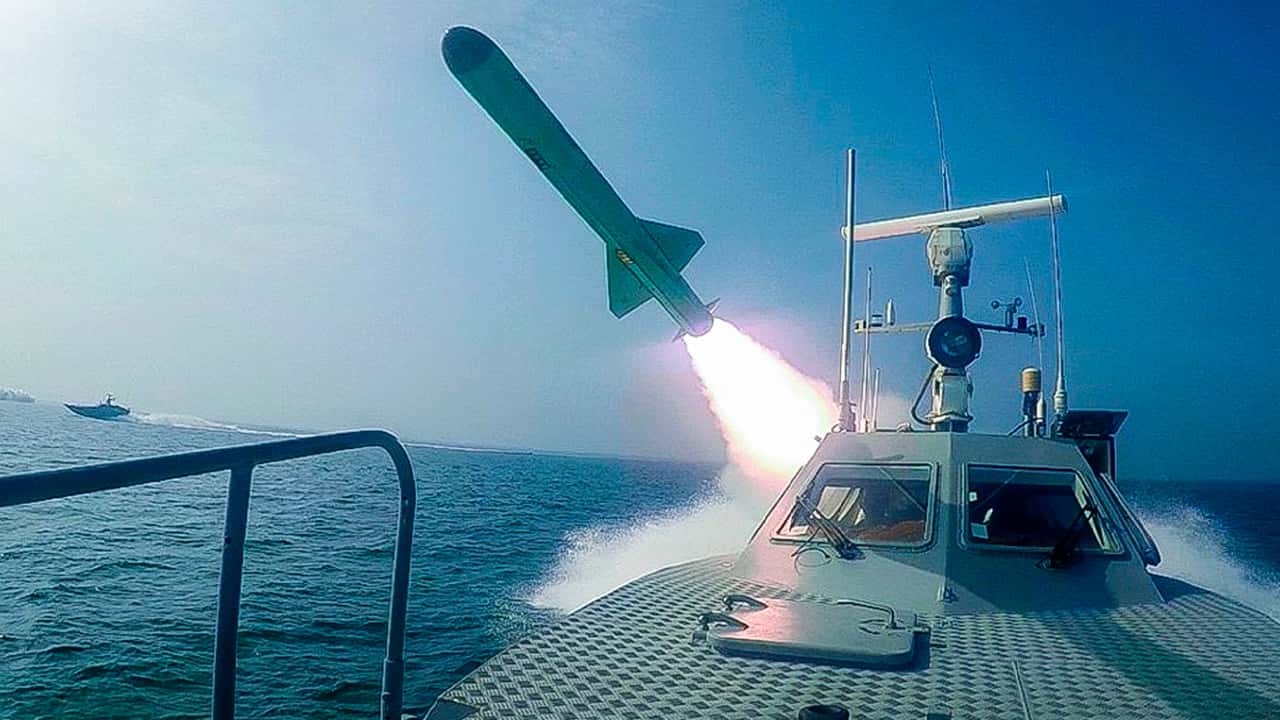 TEHRAN, Iran — Iran’s paramilitary Revolutionary Guard launched underground ballistic missiles Wednesday as part of an exercise involving a mock-up American aircraft carrier in the Strait of Hormuz, highlighting its network of subterranean bases.
Although state television documentaries have focused on operations underground at the bases, all have avoided showing geographic details revealing their locations. Wednesday’s launch from what appears to be central Iran’s desert plateau changes that amid heightened tensions between Tehran and the U.S. over its tattered nuclear deal with world powers and as economic pressures grow.
“We have carried out the launch of ballistic missiles from the depths of the earth for the first time,” Gen. Amir Ali Hajizadeh, commander of the Guard’s aerospace division, told state TV. “That means without utilizing conventional launchpads, the buried missiles suddenly rip out of the earth and hit their targets precisely.”
Drone footage captured by the Guard showed two missiles blasting out from covered positions in the desert early Wednesday morning, with debris flying up into the air in their wake. The Guard did not identify the location of the launch, nor the missiles involved.
The launch, six months after the Guard shot down a Ukrainian jetliner and killed all 176 people on board, appeared geared toward demonstrating the strength of its missile program to a domestic audience, missile expert Melissa Hanham said. The above-ground footage shown on state television, coupled with investigative techniques, make it possible to locate the site, she said.
“Once you find the silo, it’s really not a safe place to keep your missile anymore,” said Hanham, who works as the deputy director of an Austria-based group called the Open Nuclear Network. 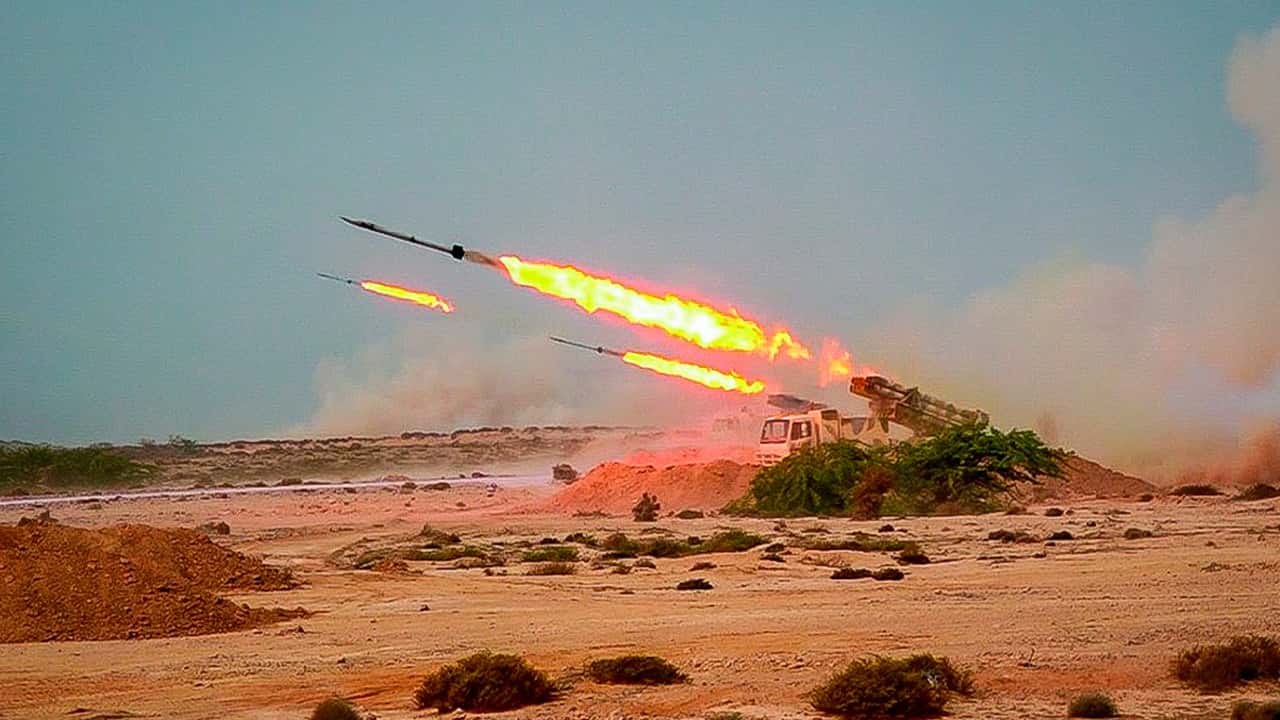 In this photo released Tuesday, July 28, 2020, by Sepahnews, missiles are fired in a Revolutionary Guard military exercise. Iran’s paramilitary Revolutionary Guard fired a missile from a helicopter targeting the mock-up aircraft carrier in the strategic Strait of Hormuz. That’s according to footage aired on state television on Tuesday. Iranian commandos also fast-roped down from a helicopter onto the replica in the footage from the exercise called “Great Prophet 14.” The drill appears aimed at threatening the U.S. amid tensions between Tehran and Washington. (Sepahnews via AP)

Given how corrosive the fuel used for the missiles is and the maintenance required, such weapons can’t simply be buried in the desert and forgotten.
Since its bloody 1980s war with Iraq, which saw both nations fire missiles on cities, Iran has developed its ballistic missile program as a deterrent, especially as a U.N. arms embargo prevents it from buying high-tech weapons systems.
The underground tunnels help protect those weapons, Hanham said.
“What they’re trying to do is increase the survivability of their missile forces,” she said. “They feel that their missile forces are exposed and that they could be taken out preemptively. By building this elaborate tunnel scheme, they’re trying to increase the survivability.”
The drill, called “Great Prophet 14,” also sends a message to the United States. Iran has been firing at a fake aircraft carrier resembling America’s Nimitz-class carriers towed out to the strait by a tugboat. Adm. Ali Reza Tangsiri, the Guard’s naval chief, said its armed drones attacked the bridge of the fake carrier Wednesday, the semiofficial Tasnim news agency reported.
During Wednesday’s drills, footage showed a missile striking a target resembling an American missile defense system known as a Terminal High-Altitude Area Defense, or THAAD.
Tasnim published a graphic overnight that altered the image of an American carrier into the shape of a casket with a set of crosshairs on it, with a caption quoting Supreme Leader Ayatollah Ali Khamenei pledging to seek revenge for the U.S. drone strike that killed a top Iranian general in January.

The drill — and the American response to it — underline the lingering threat of military conflict between Iran and the U.S. after a series of escalating incidents last year led to the January drone strike. Tehran responded to that strike by firing ballistic missiles that wounded dozens of American forces in Iraq.
While the coronavirus pandemic has engulfed both Iran and the U.S. for months, there has been a growing confrontation as America argues to extend the yearslong U.N. weapons embargo on Tehran that is due to expire in October. A recent incident over Syria involving an American jet fighter approaching an Iranian passenger plane also has renewed tensions.
Economic pressure from the collapse of the nuclear deal, caused by President Donald Trump unilaterally withdrawing America from the accord, has seen Iran’s rial currency drastically drop in value. At the time of the deal in 2015, $1 cost 32,000 rial. Today, $1 is worth some 235,000 rials.
Ballistic missile fire detected from the drill Tuesday resulted in American troops being put on alert at Al-Dhafra Air Base in Abu Dhabi in the United Arab Emirates and Al-Udeid Air Base, the forward headquarters of the U.S. military’s Central Command in Qatar, the military said. Troops briefly sought cover during that time.
Both bases are hundreds of kilometers (miles) away from where Iran placed the replica aircraft carrier in the strait, the narrow mouth of the Persian Gulf through which 20% of all oil traded passes.