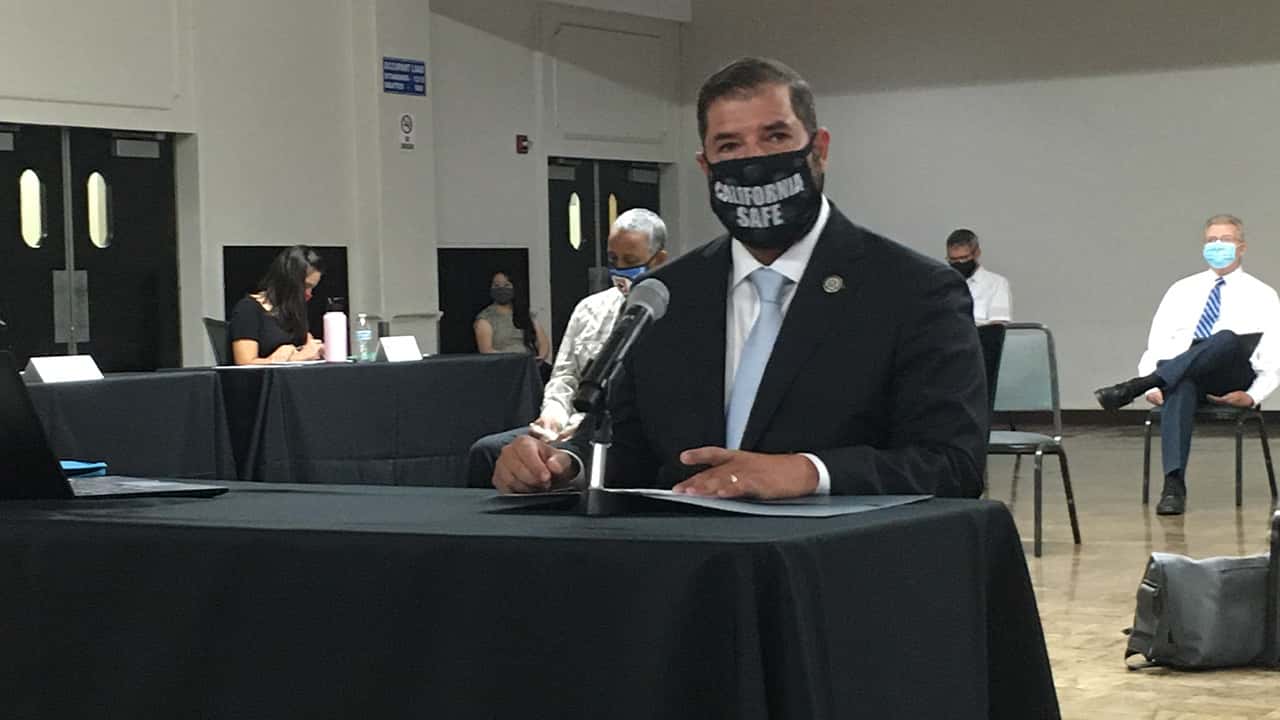 A Fresno assemblyman said the county isn’t spending COVID funds fast enough, nor being transparent about their decisions.

That dynamic was part of the largest question and answer session held locally since the start of the COVID-19 pandemic, with city and county leaders holding a joint meeting to discuss their strategy and spending in Fresno.

Assemblyman Joaquin Arambula (D-Fresno) was among those addressing the meeting, saying urgency was needed to better protect the most vulnerable in Fresno County.

“Urgency is the word I keep using because people in our rural communities and workers in our health care facilities are raising the alarm about the need for quicker, direct and effective actions to battle,” Arambula told the Fresno County Board of Supervisors and Fresno City Council.

Supervisor Nathan Magsig said the county has been transparent and acting with proper speed.

“I find it odd that he would not really come off of that script that he’s been using. Clearly, the information that was provided today showed just the tens of millions of dollars that the county has spent and how we plan on continuing to spend money moving forward,” Magsig told the media after the meeting.

“Urgency is the word I keep using because people in our rural communities and workers in our health care facilities are raising the alarm about the need for quicker, direct and effective actions to battle.” — Assemblyman Joaquin Arambula

Arambula, speaking during public comment time, criticized the county’s response as not helping the most vulnerable members of the community.

“Why haven’t these taxpayer dollars been pushed out faster and more deliberately?” Arambula asked during the meeting. “We ask if Fresno County supervisors have meaningfully engaged with community based and faith based organizations, the trusted messengers that we rely on to communicate with our diverse communities, especially those where English is not their first language.”

The county received $81.6 million from federal funds and another $16.4 million from state to help address COVID-19. Yesterday, Gov. Gavin Newsom announced another $52 million to help the Central Valley region.

Fresno County Health Director David Pomaville addressed the challenges of reaching out to agricultural workers during his presentation at the meeting. He announced a partnership with two community groups, Fresno EOC and Fresno Building Health Communities to bridge those gaps.

County Administrative Officer Jean Rousseau also outlined the county’s spending plan, similar to a presentation he made to supervisors on July 7.

“Our department has been out in rural areas doing screening and testing as well,” Pomaville said.

After the meeting, Arambula still wasn’t satisfied with the supervisor’s transparency.

Arambula wanted Fresno County to look toward other counties for best practices.

“I would like us to work and figure out if there are other counties who are implementing policies that work better than us,” Arambula said. “If they’re getting better results, can we learn from them and look to them as an example for us to work towards?

“I’ve asked some of these tough questions of our Board of Supervisors and they have been unwilling thus far to engage and look towards other counties, towards solutions,” Arambula said.

Dr. Rais Vohra, the county’s interim health officer, painted a grim picture of COVID infections. The first case in March came from a passenger on a cruise ship. Things started to get worse in late May.

Vohra said many patients avoided the doctor’s office after the pandemic took hold, a reaction Vohra did not foresee.

“This is really just a disaster. In many ways (it) represents a failure rather than a success of our ability to properly contain this epidemic here in Fresno County.” — Dr. Rais Vohra, Fresno County Interim Health Officer

COVID counts started to rise in May. Vohra said that was because what he called “quarantine fatigue.”

“That is really just a fatigue related to the lockdown, to the lack of access for doing a lot of the business and social activities, and with kids being out of school,” Vohra said.

“This is really just a disaster,” Vohra said. “In many ways (it) represents a failure rather than a success of our ability to properly contain this epidemic here in Fresno County.”

Vohra, as he has since March, said the solution is masks, social distancing and proper hygiene.

“But clearly, the communication isn’t getting through or else we wouldn’t have this rising case count and this surge. So, that’s something that I humbly admit we all need to focus on and find better solutions for,” Vohra said.

Fresno County’s current positive test rate for COVID-19 is 11%. Since the pandemic began, there have been 112 deaths in the county, which represents just under 1% of those infected.

ICU capacity in Fresno County stands at 16% as of Tuesday.

“We can slow the spread of this illness or we can build more medical capacity,” Vohra said. 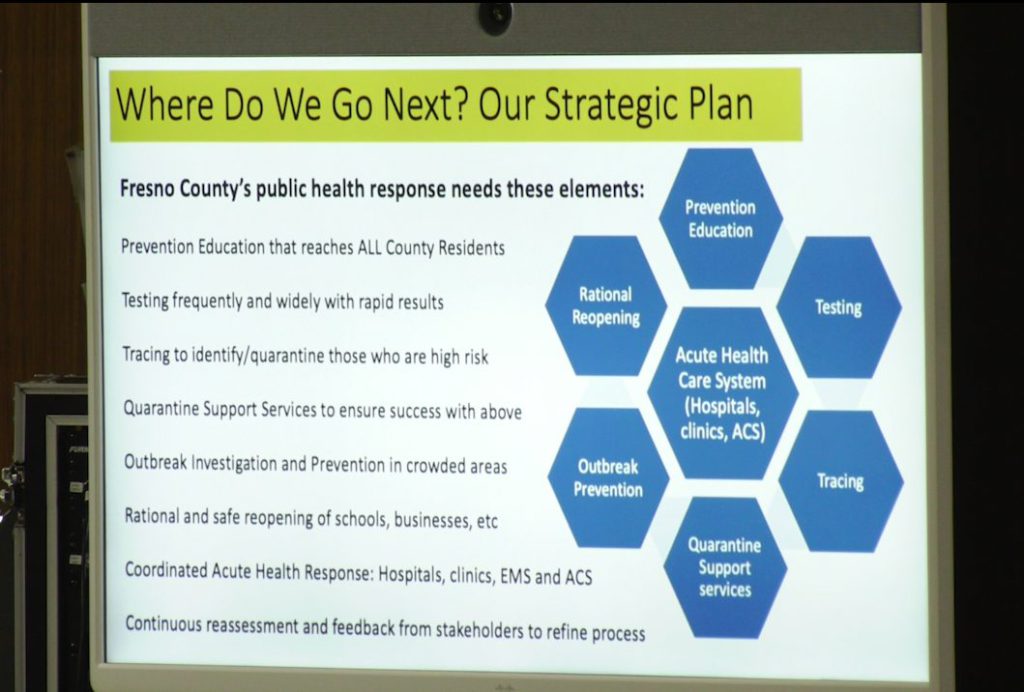 Tuesday’s meeting included a presentation from the Fresno County health department on their pandemic response strategy.

Supervisors and councilmembers met to discuss what has been done so far, what needs to be done to slow down the spread, and the spending plan for the $171 million in federal funds combined the two jurisdictions received from the CARES Act.

Held in the ballroom of the Fresno County Plaza building, only about 20 members of the public were allowed in at a time. There were approximately another 25 elected leaders and staff also in the room. The posted seating is 560. Another 20 waited in the courtyard outside the ballroom, able to listen in to the meeting.

“It’s critical that we get past politics. We should never, ever politicize a pandemic, as we have seen here in Washington and around the country. I think the best response for the pandemic involves full coordination.” — Rep. Jim Costa

Called a workshop, neither board took any votes or made any decisions. But, there was a request from the city to share data and hold further meetings.

Supervisor Brian Pacheco acknowledged these meetings can be “contentious,” but beneficial because of access to county health officials.

“I’m looking forward to continued conversations with our county. They seem to be open to having much more regular communication so that we both strategically use the dollars that have been invested in us to be able to address this pandemic in a much more effective way to help the families that are struggling,” Soria said.

Congressman Jim Costa (D-Fresno) also offered his thoughts in the meeting, reminding his fellow elected colleagues not to get bogged down with in-fighting.

“It’s critical that we get past politics. We should never, ever politicize a pandemic, as we have seen here in Washington and around the country. I think the best response for the pandemic involves full coordination,” Costa told the meeting via phone.

Costa said he supports the Heroes Act, which would provide billions for counties and cities, but it faces problems passing in the Republican-controlled Senate.

As the chairman of the Board of Supervisors, Buddy Mendes presided over the meeting, keeping things moving at a brisk pace that sometimes confounding his colleagues and guests.

He would not allow for “pontification,” he said, and at one point cut off Fresno councilman Paul Caprioglio who he deemed to be making a statement rather than asking a question.

No one was spared from Mendes’ interruptions advising speakers their time was up.

After he cut off Costa, the congressman — his voice raised and in a pointed tone — said “Thank you, Mr. Supervisor. I appreciate your time.”

When there was time remaining after the city’s presentation on spending, Councilwoman Esmeralda Soria asked to address questions they didn’t get to earlier.

Instead, Mendes allowed Supervisor Steve Brandau to ask a question. Soria, dumbfounded, had an exasperated look on her face.

A group of 17 community-based organizations sent the county their plan on how COVID money should be spent. The goal, according to a nine-page letter, is to increase testing and education in the most vulnerable populations.

Called the Fresno COVID-19 Equity Project, the collaborative is asking the county to spend up to $5 million on the effort. They also requested $4.7 million from the city of Fresno.

“The need is much larger than the resources that we have.” — Supervisor Nathan Magsig

“Through the onboarding of our more rural county-specific partners, we will augment our existing capacity to do contact tracing and community outreach,” the group wrote.

Rousseau addressed the issue and whether the county would spend money for housing or income assistance, as the city has done.

“We’re going to have a hard time stretching our money to cover the pandemic response. I know it’s included some of what’s included in the (community-based organization) contract that we’ve been talking about. It’s going to be on a limited basis. We’ll do what we can and what we can afford,” Rousseau said.

Magsig said there are priorities in spending.

“The need is much larger than the resources that we have,” Magsig said.

His top priority is to provide personal protective equipment to medical providers, he said.

Angst Leading Up to Meeting

In the weeks leading up to today’s workshop, Arambula and others had accused the county of a lack of transparency.

Arambula confronted supervisors and Rousseau at the Hall of Records on July 17 — a tense exchange that found its way on social media.

The Latino Legislative Caucus sent a letter on July 20 to Gov. Gavin Newsom, questioning the response by Fresno County officials. The caucus asked for oversight on county spending.

“There are reports that certain localities have not or do not plan to utilize relief funds for their intended purpose. For instance, in Fresno County (which accounts for 10,639 infections – the 6th largest county total in the state) funds are not being allocated to disproportionally hard hit communities – incidentally, those with the highest concentrations of Latino residents,” wrote caucus chair Assemblywoman Lorena Gonzalez (D-San Diego) and state Sen. Maria Elena Durazo (D-Los Angeles).

The county defended itself against transparency arguments, saying they have been open about its spending plan. At its last board meeting on July 7, Rousseau presented an update to the supervisors on how it plans to spend $69 million of COVID funds. At the time, Rousseau called it a “squishy proposal” based on waiting for additional federal relief.

Nothing Like Years Past, Big Fresno Fair Going Virtual & Drive-Thru