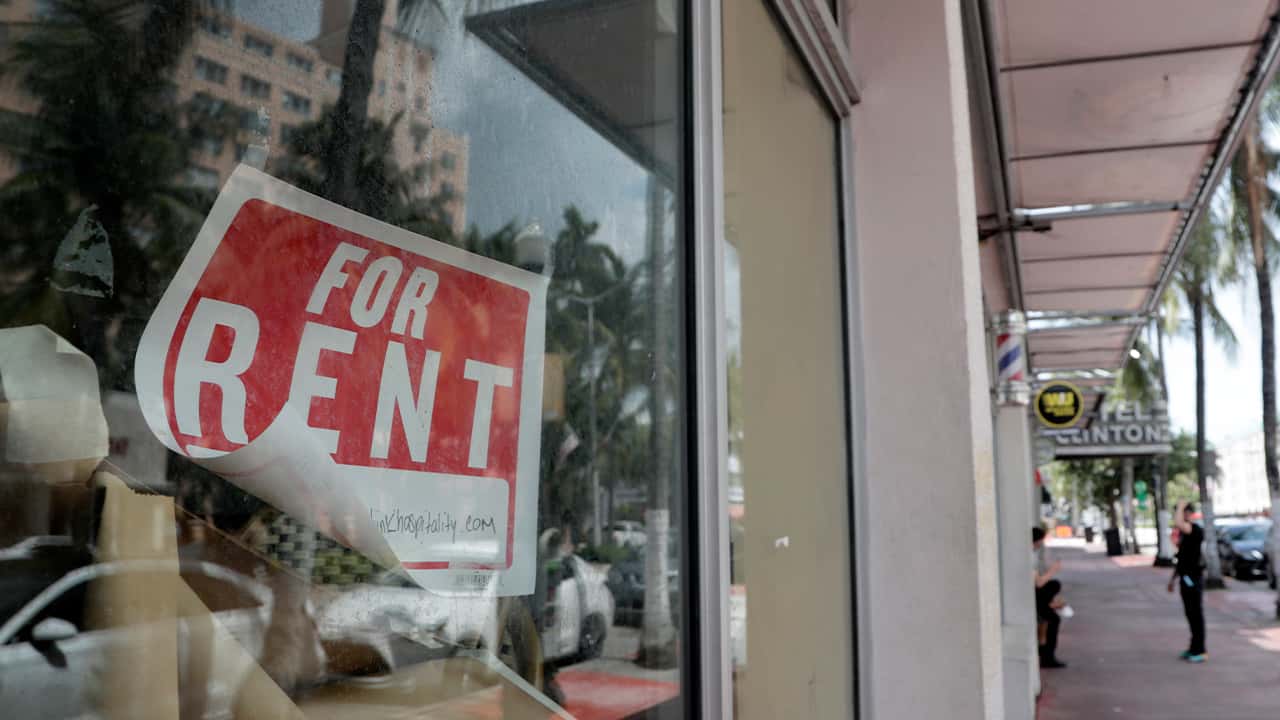 WASHINGTON — Nearly half of Americans whose families experienced a layoff during the coronavirus pandemic now believe those jobs are lost forever, a new poll shows, a sign of increasing pessimism that would translate into roughly 10 million workers needing to find a new employer, if not a new occupation. 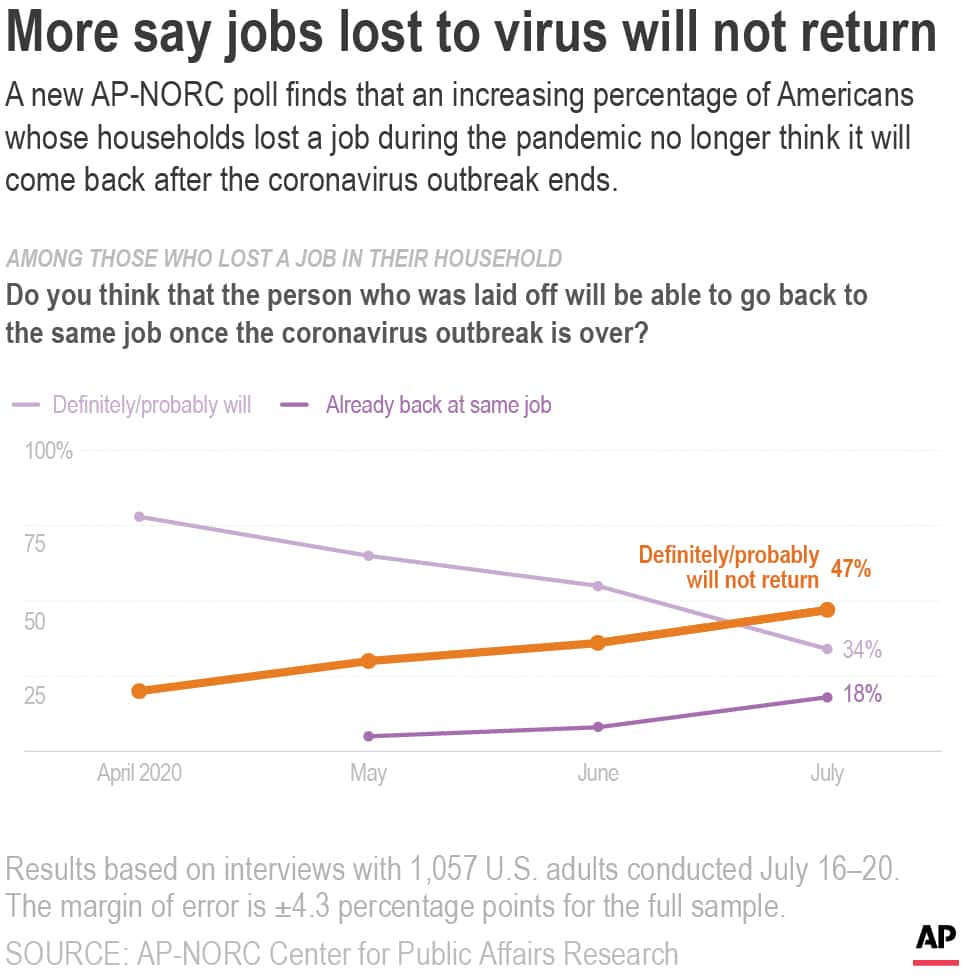 Overall, About Half of Americans Say They or Someone in Their Household Has Lost Income

The poll shows that 72% of Americans would rather have restrictions in place in their communities to stop the spread of COVID-19 than remove them in an effort to help the economy. Just 27% want to prioritize the economy over efforts to stop the outbreak.
“The only real end to this pandemic problem is the successful application of vaccines,” said Fred Folkman, 82, a business professor from Long Island, in New York.
About 9 in 10 Democrats prioritize stopping the virus, while Republicans are more evenly divided — 46% focus on stopping the spread, while 53% say the economy is the bigger priority.
President Donald Trump and Congress have yet to agree to a new aid package. Democrats, who control the House, have championed an additional $3 trillion in help, including money for state and local governments. Republicans, who control the Senate, have proposed $1 trillion, decreasing the size of the expanded unemployment benefits.
Overall, about half of Americans say they or someone in their household has lost some kind of income over the course of the pandemic. That includes 27% who say someone has been laid off, 33% been scheduled for fewer hours, 24% taken unpaid time off and 29% had wages or salaries reduced.
Eighteen percent of those who lost a household job now say it has come back, while another 34% still expect it to return.
The poll continues to show the pandemic’s disparate impact. About 6 in 10 nonwhite Americans say they’ve lost a source of household income, compared with about half of white Americans. Forty-six percent of those with college degrees say they’ve lost some form of household income, compared with 56% of those without. 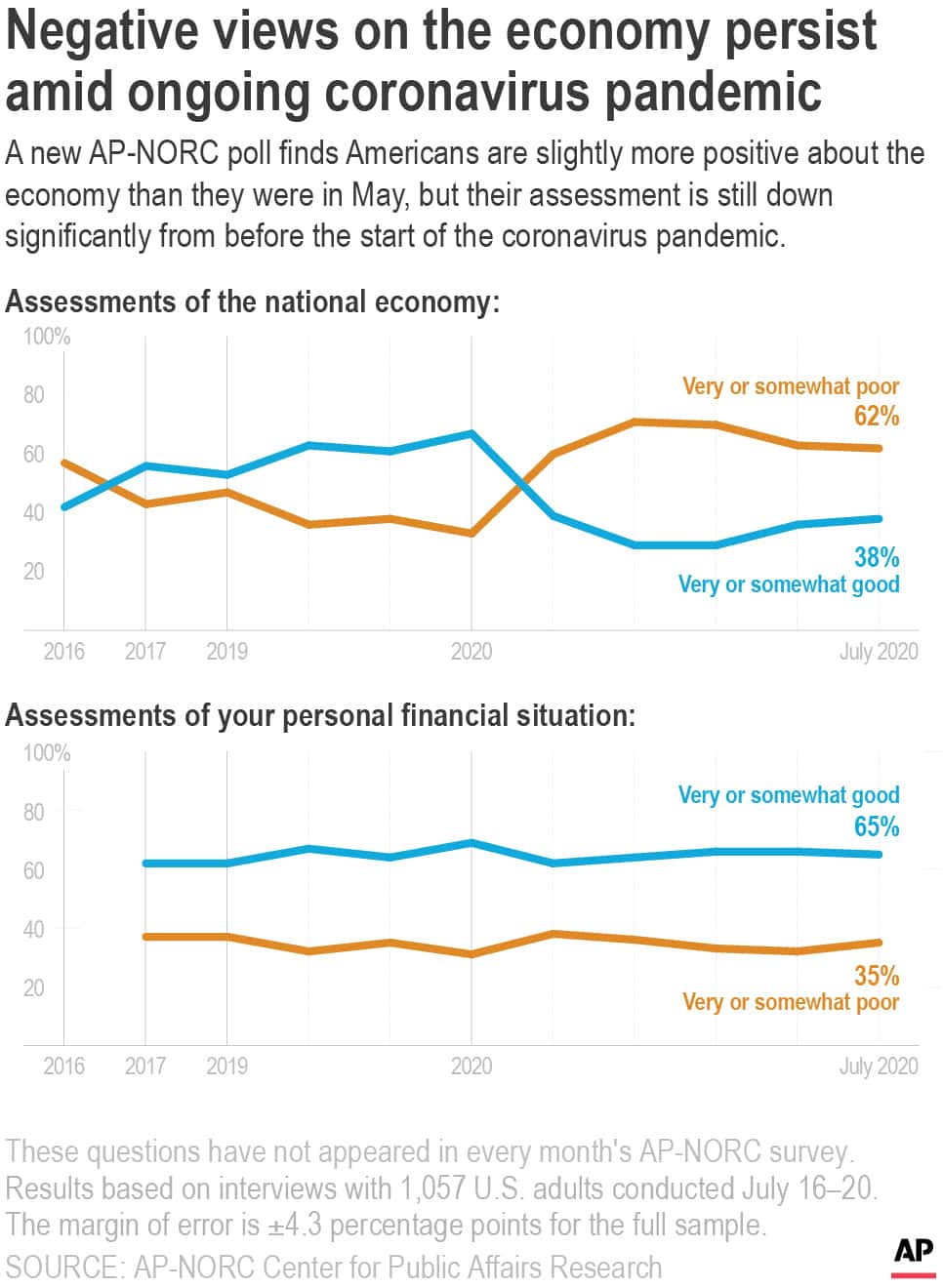 Trump’s approval rating on handling the economy stands at 48%, consistent with where it stood a month ago but down from January and March, when 56% said they approved. Still, the economy remains Trump’s strongest issue. Working to Trump’s advantage, 88% of Republicans — including 85% of those whose households have lost income during the pandemic — approve of his handling of the economy. Eighty-two percent of Democrats disapprove.