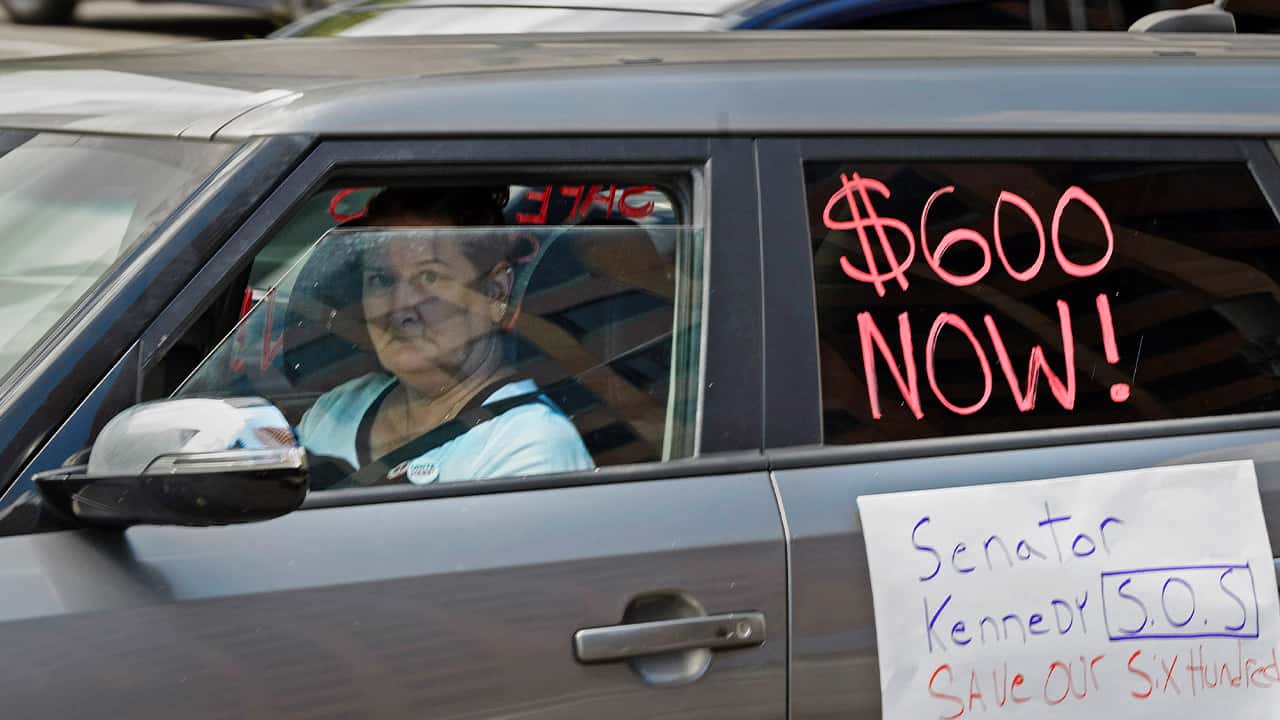 WASHINGTON — The viral pandemic’s resurgence caused the number of Americans seeking unemployment benefits to rise last week for the first time in nearly four months, evidence of the deepening economic pain the outbreak is causing.
The increase in weekly jobless claims to 1.4 million served to underscore the outsize role the unemployment insurance system is playing among the nation’s safety net programs — just when a $600 weekly federal aid payment for the jobless is set to expire at the end of this week.
Last week’s pace of unemployment applications — the 18th straight time it’s topped 1 million — was up from 1.3 million the previous week. Before the pandemic, applications had never exceeded 700,000. An additional 975,000 applied last week for jobless aid under a separate program that has made self-employed and gig workers eligible for the first time.
The weakening of the labor market has raised fears that the economy will shed jobs again in July, after two sharp hiring gains in May and June, and derail prospects for a recovery from the recession.
“The labor market remains in a precarious place as COVID-19 cases surge in some parts of the country and fresh lockdown measures are adopted in response,” said Nancy Vanden Houten, lead economist at Oxford Economics, a consulting firm.
In contrast to the U.S., the outlook has brightened for some other major economies. Europe is forecast to rebound next year after having managed to shrink its coronavirus caseload. Unemployment in the 19 countries that use the euro has remained contained, reflecting aggressive government efforts to keep workers on payrolls.

And China has become the first major economy to grow since the start of the pandemic. Economists say China will likely recover relatively fast because of the Communist Party’s move to impose early and intensive anti-disease measures.
The U.S. government also said Thursday that the total number of people receiving jobless benefits fell 1.1 million to 16.2 million. That was a hopeful sign that even as layoffs remain persistently high, some companies are recalling workers. Yet that figure is still roughly 10 times what it was before the pandemic.
The painfully high number of layoffs reflects a pandemic that’s causing both confirmed infections and deaths to rise nationally. Laboratories are buckling under a surge of coronavirus tests, creating processing delays that are undercutting the pandemic response. With the U.S. tally of confirmed infections nearing 4 million and deaths above 143,000, some workers are being kept off the job while awaiting test results. Analysts say the economy can’t improve until authorities can control the spread of the virus, a need that is complicating the reopening of businesses and schools.
Last week, applications for unemployment benefits declined in many states that have been hard hit by the virus, including Texas, Florida, Georgia and Arizona. Jobless claims rose in other states that are also seeing increases, however, including Louisiana, California, and Tennessee. The resurgence of confirmed virus cases has forced some businesses to close a second time or to impose tighter restrictions on customers in response to state mandates. The resulting pullback in business activity has hindered job growth and likely forced additional layoffs. 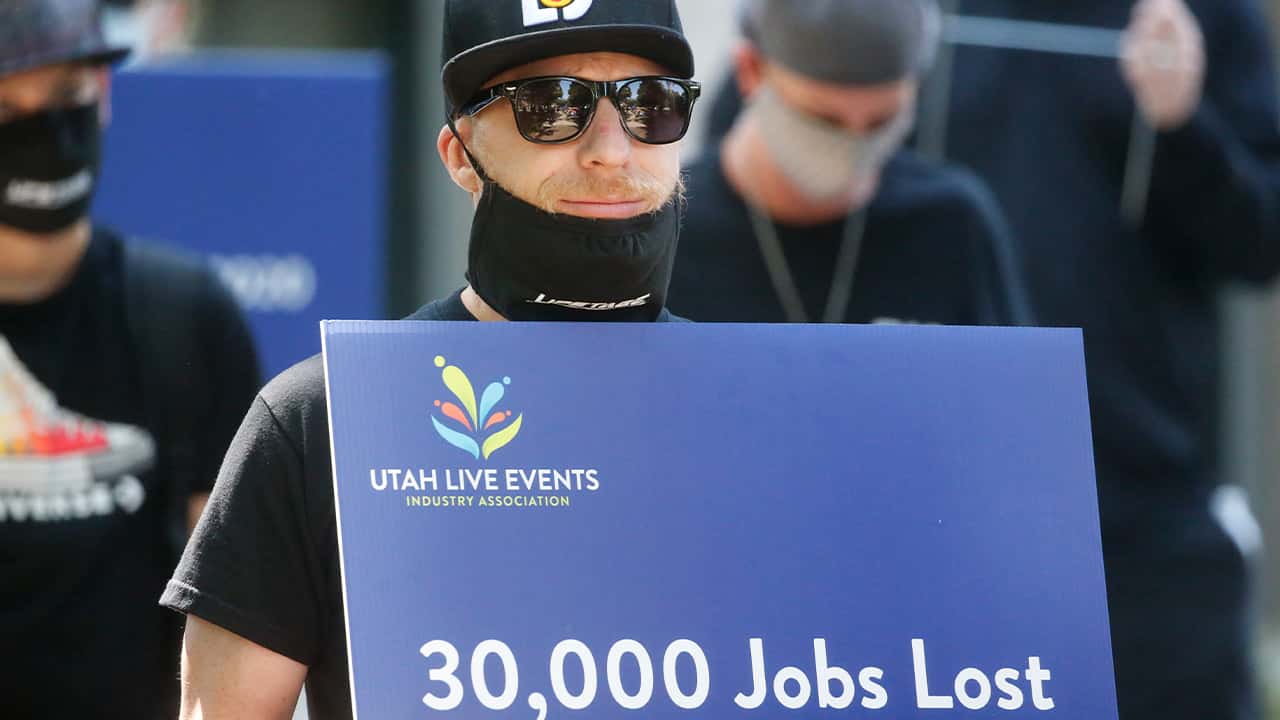 Special events workers who were forced out of work because of the COVID-19 pandemic marched Tuesday, July 21, 2020, in Salt Lake City. Marchers organized by Utah Live Event Industry Association aimed to draw attention and legislative support to the people and businesses who put on concerts, theater, sports, and other live events which mostly have gone dark since the COVID-19 pandemic hit in March. They’re called it a “peaceful walk for work.” The silent parade showcased families struggling to make ends meet since events have been canceled, with no end to the restrictions in sight. (AP Photo/Rick Bowmer)

Members of Congress Are Negotiating Another Aid Package

The federal government’s $600 weekly benefit for laid-off workers — which is in addition to whatever jobless aid a state provides — is the last major source of economic help from the $2 trillion relief package that Congress approved in March. A small business lending program and one-time $1,200 payment have largely run their course.
Members of Congress are negotiating another aid package that might extend the $600 benefit, though likely at a lower level. Because of the $600 weekly federal benefit, roughly two-thirds of the unemployed are receiving more in aid than they earned at their former jobs, research has shown — a finding that’s led Republicans to argue that it is discouraging people from returning to work.
Yet the additional money has also been a key source of support for people who lost jobs that no longer exist or who fear being infected by the virus if they return to work.
The enhanced aid “is important to a lot of households, especially to my household, that cannot go back to work,” said Cindy Moffett, who used to work in the trade show industry, which has seen business dry up entirely since the pandemic began. Without tourists, she has no job to return to.
Analysts say it’s unlikely an agreement will be reached before the end of this month, and could take until mid-August. It would then take additional time for state unemployment agencies to distribute any extra benefit that is approved.
Such a disruption would likely “result in a slower rebound in overall economic activity,” said Joe Brusuealas, chief economist at RSM, a tax advisory firm.

Unemployment aid accounted for 6% of all U.S. income in May, a greater share than even Social Security. Economists say it’s one reason why retail spending rebounded as quickly as it did in May and June, helping fuel a modest economic rebound. If the full $600 were extended, it would boost consumer spending enough to generate roughly 1 million jobs by the end of this year, Oxford Economics estimates.
The end of the added benefit coincides with the expiration of a federal moratorium on evictions on Saturday. That moratorium bars evictions of renters who live in federally subsidized housing, and without it, about 22 million people are at risk of losing their homes.
Desperate to stop the spread of the virus and its resulting economic impact, a growing number of states have announced new or broadened mask requirements. A new survey from The Associated Press-NORC Center for Public Affairs Research finds three out of four Americans, including a majority of Republicans, favor requiring people to wear face coverings while outside their homes.
Real-time measures of the economy suggest that companies are pulling back on hiring and that more small businesses are closing permanently. Credit card spending has been stuck at about 10% below year-ago levels for nearly a month, according to JPMorgan Chase, after having risen steadily from mid-April to mid-June.

Data from the consumer-review website Yelp, which tracks millions of small businesses, shows that more such companies are permanently shutting down. Nearly 73,000 small businesses have closed for good since the pandemic intensified in March, up 28% from mid-June.
“Every time a business closes, that makes the recovery longer and harder, so that worries me,” said Ernie Tedeschi, an economist at the investment bank Evercore ISI.
Many of the unemployed say they fear that a slow and prolonged recovery would be hard to survive without the $600 weekly aid from the federal government. If that payment were eliminated, total unemployment benefits would shrink by one-half to two-thirds, depending on a recipient’s state.
Melissa Bennett has been using the federal jobless benefit to help pay her $1,900 monthly health insurance bill, which she’s paid on her own since losing her employer-sponsored plan in June when she was laid off from her job at a vacation time-share rental in Myrtle Beach, South Carolina, which has become a COVID-19 hot spot.
Without the $600, her unemployment benefit will fall to just $200 a week, and she’ll have to decide whether to pay her mortgage or her utilities first.

Out of ‘Protest,’ Great American Barbershop Opens in Fresno, Clovis