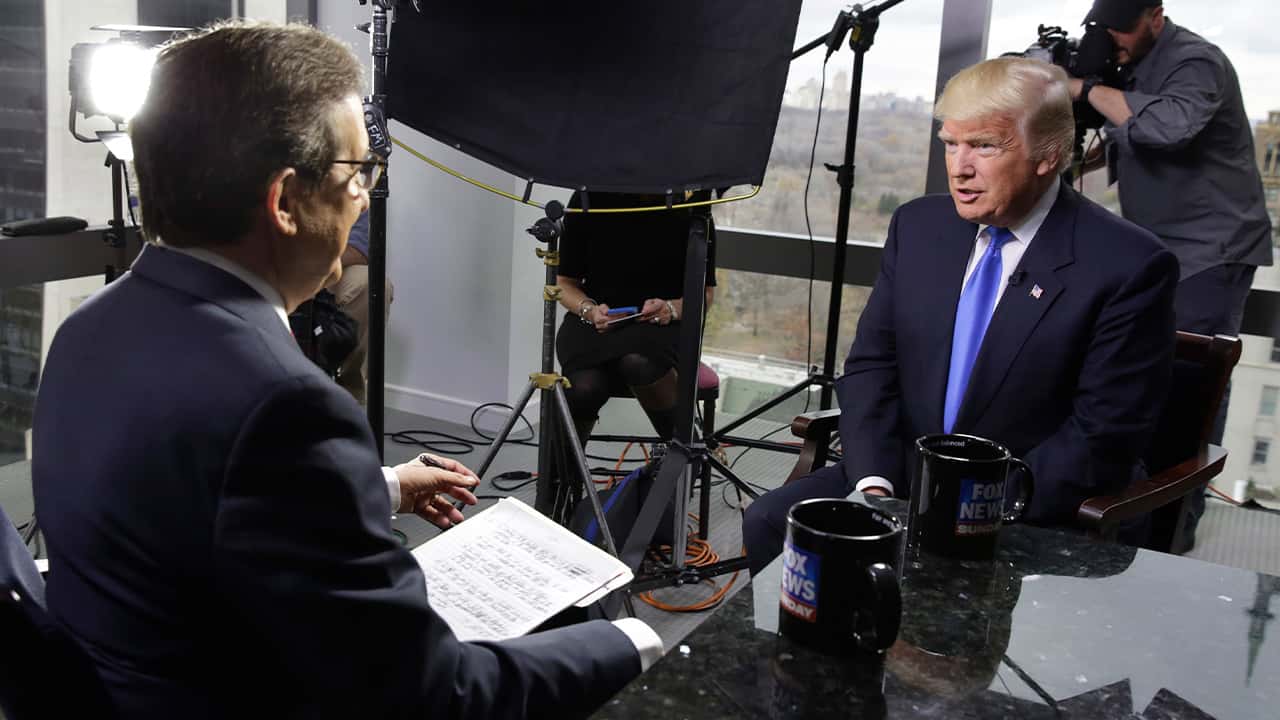 NEW YORK — As veteran journalists who now teach the craft to college students, Tom Bettag and Frank Sesno both said they will use Chris Wallace’s interview with President Donald Trump to show how it’s done well.
“This was an ‘A-plus’ accountability interview,” said Sesno, who spoke to five presidents as a CNN Washington bureau chief and now teaches a class in the “art of the interview” at George Washington University.
Wallace’s interview on “Fox News Sunday” made news on several fronts, from the coronavirus to the presidential campaign, and his direct challenges to Trump were still being talked about a day later.
To some, its impact was exaggerated simply because Trump had so rarely put himself in that position during his first term as president.
When the president said that presumptive Democratic nominee Joe Biden wants to defund police departments, Wallace replied, “No, sir, he does not.”
That led to a back-and-forth over whether Biden wanted to “abolish” police forces, with the president asking for help from press secretary Kayleigh McEnany, standing nearby. Because the interview was taped in advance, Wallace was able to add a voiceover that the White House could not provide evidence of the president’s claim, “because there is none.”
Wallace also came armed with statistics to challenge Trump arguments about the mortality rate and testing for COVID-19.
Asked to respond to clips of him making too-rosy predictions about the spread of the virus, a flustered Trump responded: “I’ll be right eventually.”

Wallace Kept Many of His Questions Direct

“No one works harder on an interview,” said University of Maryland’s Bettag, the longtime producer of ABC’s “Nightline” when Wallace would occasionally sub for Ted Koppel as host. “He goes over and over on questions. He consults with as many people as he can. Most of all, he studies what his subject is likely to answer. He did a great interview because he worked his butt off getting ready.”
Sesno compared it to a lawyer preparing for every eventuality when cross-examining a witness.
At one point, Trump denied it when Wallace asked, “why on Earth would your administration be involved in a campaign to discredit Dr. (Anthony) Fauci?” Wallace then showed him a copy of an anti-Fauci cartoon shared on social media by a White House aide.
Wallace also kept many of his questions direct, less easy to slip away from: “Is the Confederate flag offensive?” “Would you consider a national mandate that people need to wear masks?” “Why wouldn’t you … send more money so the schools would be safer?”
He asked Trump, “Is Joe Biden senile?” and the president answered, “I wouldn’t say that.” But later in the interview he described the Democrat as “mentally shot.”
“The way he asked the questions made for an interview that was very revealing,” said Jane Hall, a journalism professor at American University. “You can confront people without being confrontational.”
Hall, a Fox News analyst when she covered the media for the Los Angeles Times, took students to an appearance by Wallace at the university in February. Some initially wondered what they would get out of it, believing that many Fox personalities are friendly to Trump and few of his appearances on the network are particularly challenging.
Wallace is old-school, however, a former White House correspondent, and a “Meet the Press” moderator while at NBC News. He’s been at Fox since 2003.

“He’s very good at this. He’s been doing this for a long time. And he’s got the Wallace DNA,” Sesno said. Wallace is the son of legendary “60 Minutes” correspondent Mike Wallace.
Meghan McCain said Monday on “The View” that “it was the first time I’ve really seen President Trump squirm.”
He’s not often in that position. Trump has been interviewed 19 times as president by Fox’s Sean Hannity and 17 times on “Fox & Friends,” said CBS News reporter Mark Knoller, who keeps count of the president’s media appearances. Fox has been given 92 interviews overall — compared to 20 on NBC, CBS and ABC combined and none on CNN.
Wallace may have done well, but tough questioning and fact-checking aren’t a reason to throw him a parade, author Steven Beschloss tweeted. It’s what every journalist should be doing, he said.
CNN’s fact-checker, Daniel Dale, said on Twitter that Wallace missed opportunities to correct Trump more.
Some Republicans said it was time for Biden to get the same treatment. Former House Speaker Newt Gingrich called the interview a “big win” for Trump because “he proved he could take the heat.”
One White House staff member said privately that Trump appeared to be caught off guard by the questioning and it did little to improve his standing with the public.
Even if the president doesn’t appear on “Fox News Sunday” again, there’s a strong chance Trump hasn’t seen the last of Wallace. He was one of the presidential debate moderators in 2016 and his performance Sunday can’t hurt his chances of being selected again.