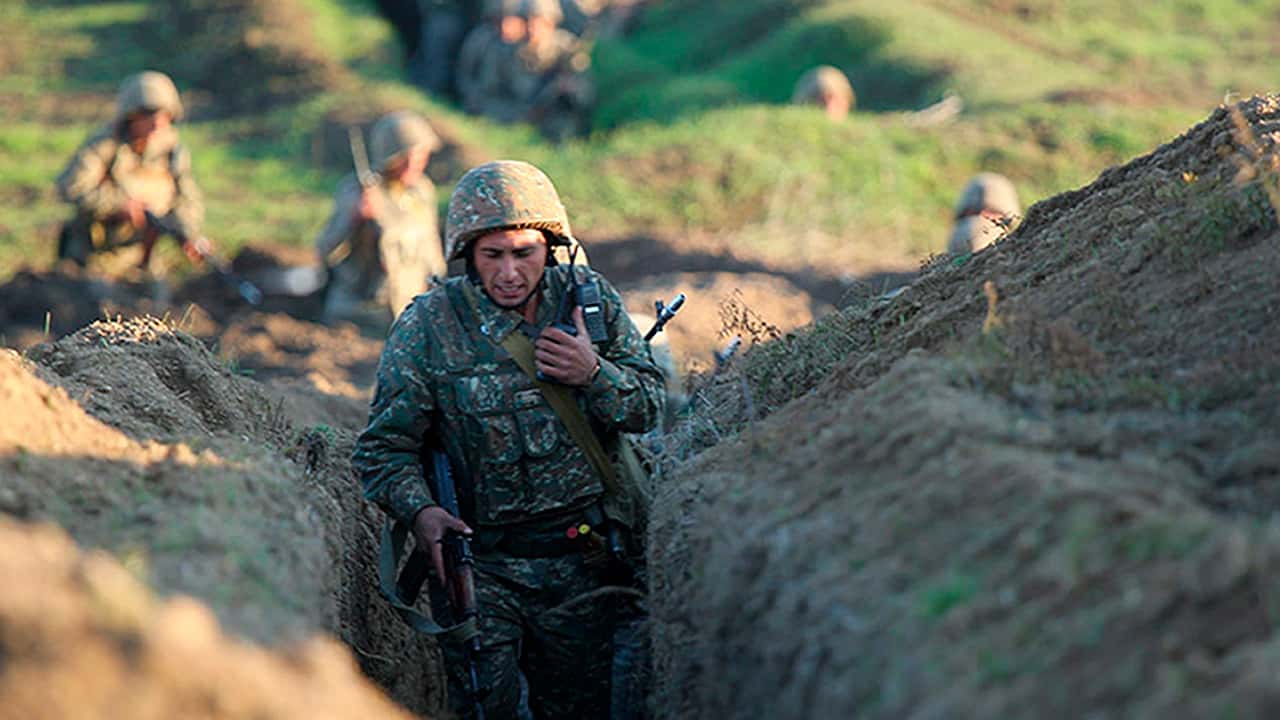 YEREVAN, Armenia — Armenia and Azerbaijan forces fought Tuesday with heavy artillery and drones, leaving at least 16 people killed on both sides, including an Azerbaijani general, in the worst outbreak of hostilities in years.
Skirmishes on the volatile border between the two South Caucasus nations began Sunday. Azerbaijan said it has lost 11 servicemen and one civilian in three days of fighting, and Armenia said four of its troops were killed Tuesday.


Armenian officials claimed that Azerbaijani drones launched an attack on the Tuvush province town of Berd, targeting civilian infrastructure. Defense Ministry spokeswoman Shushan Stepanyan said that one of Azerbaijani drones was downed.
The two neighbors in the South Caucasus have been locked in conflict over Nagorno-Karabakh, a region of Azerbaijan that has been under the control of ethnic Armenian forces backed by Armenia since a war there ended in 1994. International efforts to settle the conflict have stalled.

Armenian and Azerbaijani forces have frequently engaged in clashes. The current skirmishes appear to mark the most serious spike in hostilities since 2016 when scores were killed in four days of fighting.
“I have been in communication with Armenian and Artsakh officials and confirmed that Azerbaijan launched unprovoked military actions against Armenia,” California state Sen. Andreas Borgeas said in a news release.
“Based on Azerbaijan’s past behavior, and having been extensively involved in Caucasus-related issues, this appears to be an orchestrated attempt to destabilize the region at the behest of Turkey.”
Borgeas’ district is home to about 40,000 residents of Armenian descent.
The latest incident began Sunday when Armenian and Azerbaijani troops exchanged fire in the northern section of their border. Officials in both countries blamed each other for starting the fighting and said that sporadic shelling has continued.
Azerbaijan’s Defense Ministry said two senior officers, Maj. Gen. Polad Hashimov and Col. Ilgar Mirzayev, were killed in fighting Tuesday along with five other servicemen.
Armenian officials claimed that Azerbaijani drones launched an attack on the Tuvush province town of Berd, targeting civilian infrastructure. Defense Ministry spokeswoman Shushan Stepanyan said that one of Azerbaijani drones was downed.
Stepanyan also charged that the Azerbaijani military used civilians as shields, placing artillery close to the village of Dondar Gushchu in the Tovuz district about 10 kilometers (six miles) from the border.
“The Azerbaijani side has surrounded its own population with artillery batteries, making them a target, and then complained that the Armenian forces fired in that direction,” she said on Facebook where she posted images of the Azerbaijani artillery around the village.

The Azerbaijani military denied losing a drone and in turn claimed that its forces shot down an Armenian drone and destroyed an Armenian artillery system along with its crew.
As hostilities continued, Armenia also accused Azerbaijan of launching cyberattacks on Armenian government websites.
Armenian Prime Minister Nikol Pashinyan on Monday accused Azerbaijan of provoking the clashes and warned that it would “bear responsibility for the unpredictable consequences.” Azerbaijani President Ilhan Aliyev denounced what he described as “another provocation of Armenia” and vowed to protect Azerbaijan’s national territory.
Turkey, which has close ethnic and cultural ties with Azerbaijan, has voiced strong support to Baku in the conflict.
The United States and Russia, which co-chair the Minsk group of the Organization for Security and Cooperation in Europe that has tried to negotiate a settlement of the Nagorno-Karabakh conflict, have condemned the violence and called for restraint.
Russian Foreign Minister Sergey Lavrov had separate calls with his counterparts in Armenia and Azerbaijan on Monday to call for an immediate ceasefire.
Russian President Vladimir Putin’s spokesman, Dmitry Peskov, said Tuesday that Moscow was “deeply worried” about the fighting and stands ready to play mediator.
U.N. Secretary-General Antonio Guterres also expressed worry. His spokesman, Stéphane Dujarric, said in a statement that the U.N. chief “urges an immediate end to the fighting and calls on all involved to take immediate steps to deescalate the situation and refrain from provocative rhetoric.”