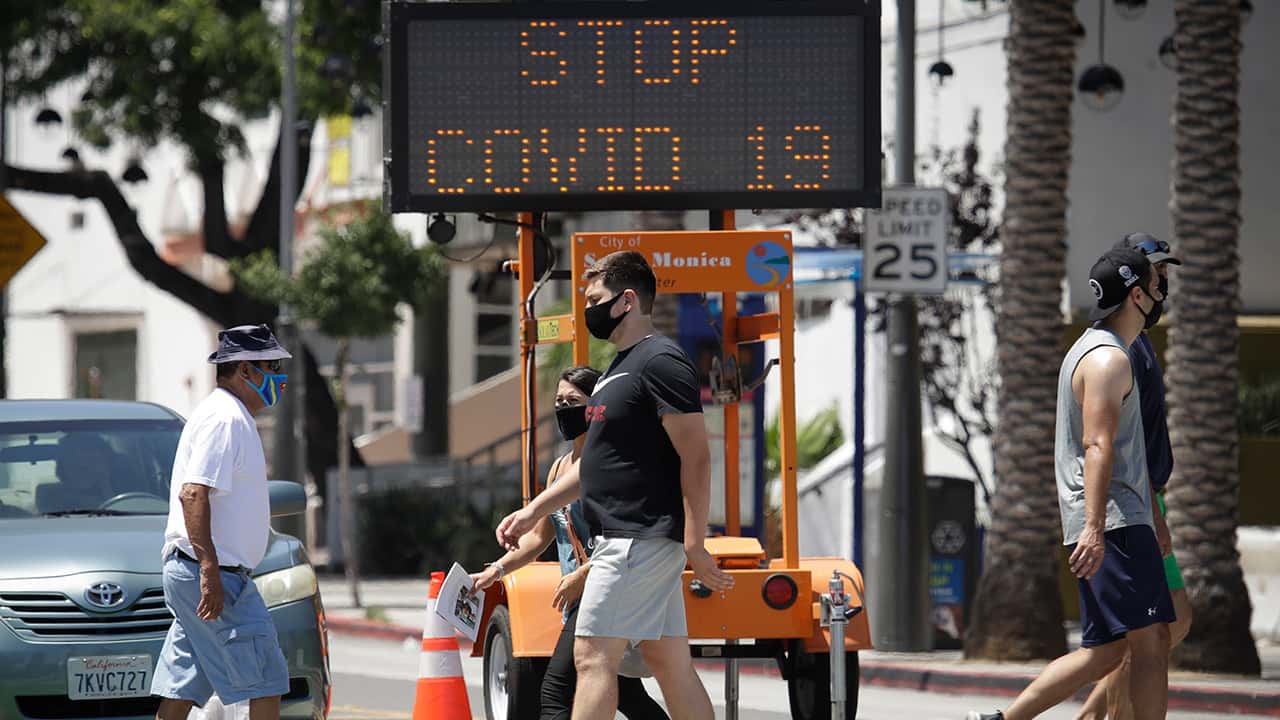 ST. PETERSBURG, Florida — The United States was grappling with the worst coronavirus outbreak in the world on Monday, as Florida shattered the national record for a state’s largest single-day increase in new confirmed cases and the World Health Organization warned that the pandemic is worsening globally and that “there will be no return to the old normal for the foreseeable future.”
The WHO director-general said that while numerous countries have now brought their previously explosive outbreaks under control, namely those in Europe and Asia, “too many countries are headed in the wrong direction.”
Without naming specific politicians, Tedros Adhanom Ghebreyesus also chastised political leaders for their “mixed messages” amid the coronavirus outbreaks, saying that they are “undermining the most critical ingredient of any response: trust.”

Researchers Expect Deaths to Rise in the U.S. for at Least Some Weeks

Pelosi told CNN’s “State of the Union” that she hopes it means the president “will change his attitude, which will be helpful in stopping the spread of the coronavirus.”
In Florida, where parts of Walt Disney World reopened Saturday, 15,299 people tested positive, for a total of 269,811 cases, and 45 deaths were recorded, according to state Department of Health statistics reported Sunday.
California had the previous record of daily positive cases — 11,694, set on Wednesday.
The numbers come at the end of a record-breaking week as Florida reported 514 fatalities — an average of 73 per day. Three weeks ago, the state was averaging 30 deaths per day.
Researchers expect deaths to rise in the U.S. for at least some weeks, but some think the count probably will not go up as dramatically as it did in the spring because of several factors, including increased testing.
Regarding the WHO experts in China, the country’s Foreign Ministry spokesperson, Hua Chunying, said they would work with Chinese scientists and medical experts on “scientific cooperation on the new coronavirus tracing issue.”
China has argued that the virus might have originated outside of China and has angrily denied allegations that it covered up the scale of the outbreak as infections first began to spread.
U.S. President Donald Trump has harshly criticized WHO over its response to the coronavirus pandemic and accused it of bowing to Chinese influence. The Trump administration formally notified the U.N. last week of its withdrawal from WHO, although the pullout won’t take effect until July 6, 2021.
“We have a basic consensus with the WHO that virus tracing is a scientific issue, and that requires international scientific research and cooperation of scientists across the world,” ministry spokesperson Hua said at a daily briefing. “WHO also believes that the virus tracing is an issue in progress, which may involve multiple countries and regions, and WHO will also conduct similar inspections in other countries and regions as needed.”

Confirmed Cases Also Have Been Found at Three Other Okinawa Bases

The WHO has confirmed the visit by an epidemiologist and an animal diseases specialist but has not given out information on their agendas while in China. The virus causing the deadly illness COVID-19 is believed to have originated in bats and then jumped to humans via an intermediary species, possibly the anteater-like pangolin that is prized in China for its scales used in Chinese medicine as well as its meat.

Kelly Preston, Actor and Wife of John Travolta, Dies at 57