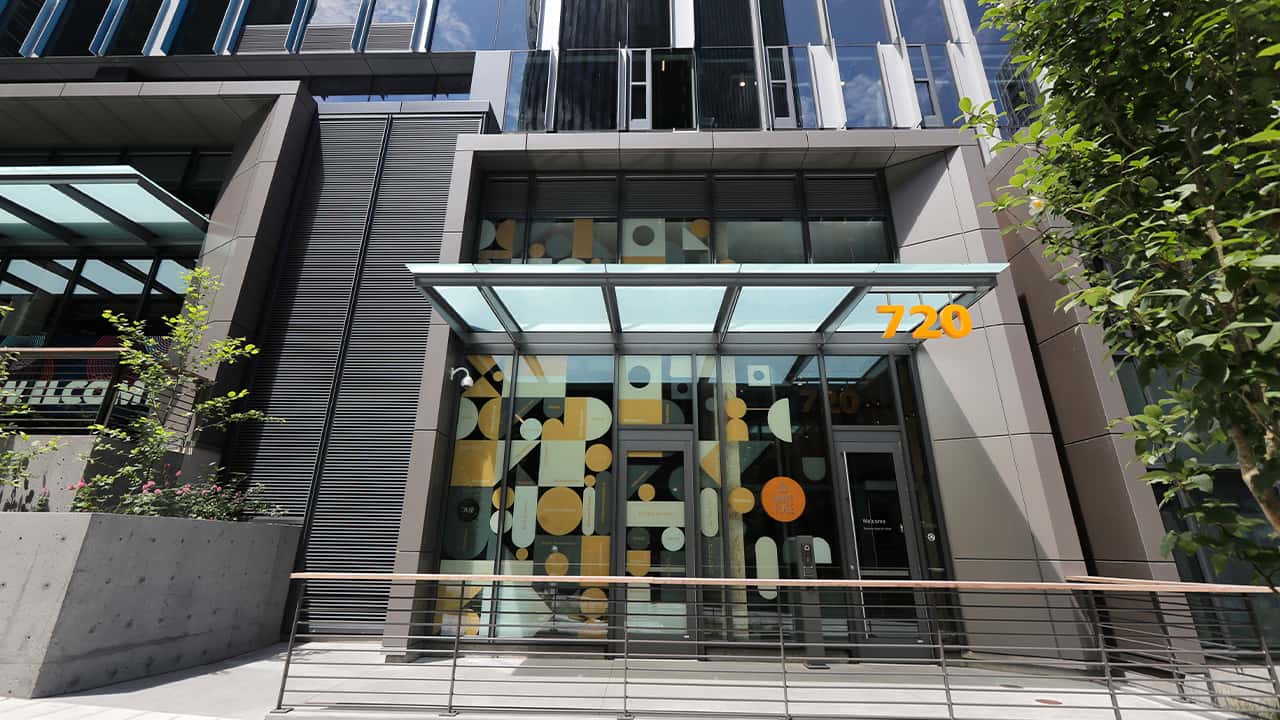 SEATTLE — A homeless shelter built on Amazon’s perfectly manicured urban Seattle campus is a major civic contribution that pushes the company to face the crisis and criticism in the hometown it has rapidly transformed.

Mary’s Place offers private rooms and is expected to house 1,000 people a year, while the other end is dedicated to Amazon’s cloud computing unit. The shelter shares the “Amazonia” aesthetic throughout: exposed pipes, citrus-colored walls popping against concrete floors, even signs inscribed in the tech giant’s signature office font.
Still, the shelter doesn’t erase the history of resentment over the wealth of Amazon CEO Jeff Bezos and its workers, which peaked after the company and other corporations successfully pressured the Seattle City Council to rescind a tax on large companies that would have funded homelessness services in 2018.
Months later, Bezos, the world’s richest man whose stake in the company he founded is now worth more than $160 billion, announced his long-awaited private charitable fund would tackle homelessness — an irony noted by locals and philanthropy scholars alike.
To date, the Bezos Day One Fund has given $196 million in grants to organizations working on family homelessness issues across the country. He is also creating free preschools, though little else is known about the organization since Bezos first announced the $2 billion private philanthropy fund in 2018. An Amazon representative declined to comment on Bezos’ behalf.
Sara Rankin, a homeless rights advocate and lawyer who leads the Seattle-based Homeless Rights Advocacy Project, said Mary’s Place is a safe investment for Amazon because the nonprofit caters to the most sympathetic kind of homelessness. But Rankin said the shelter ultimately does not address the epicenter of the city’s homelessness crisis.
“It’s not bold and it’s not significant, at least with respect to the crisis,” she said. “It’s not as significant as it needs to be. It’s certainly not systemic.” 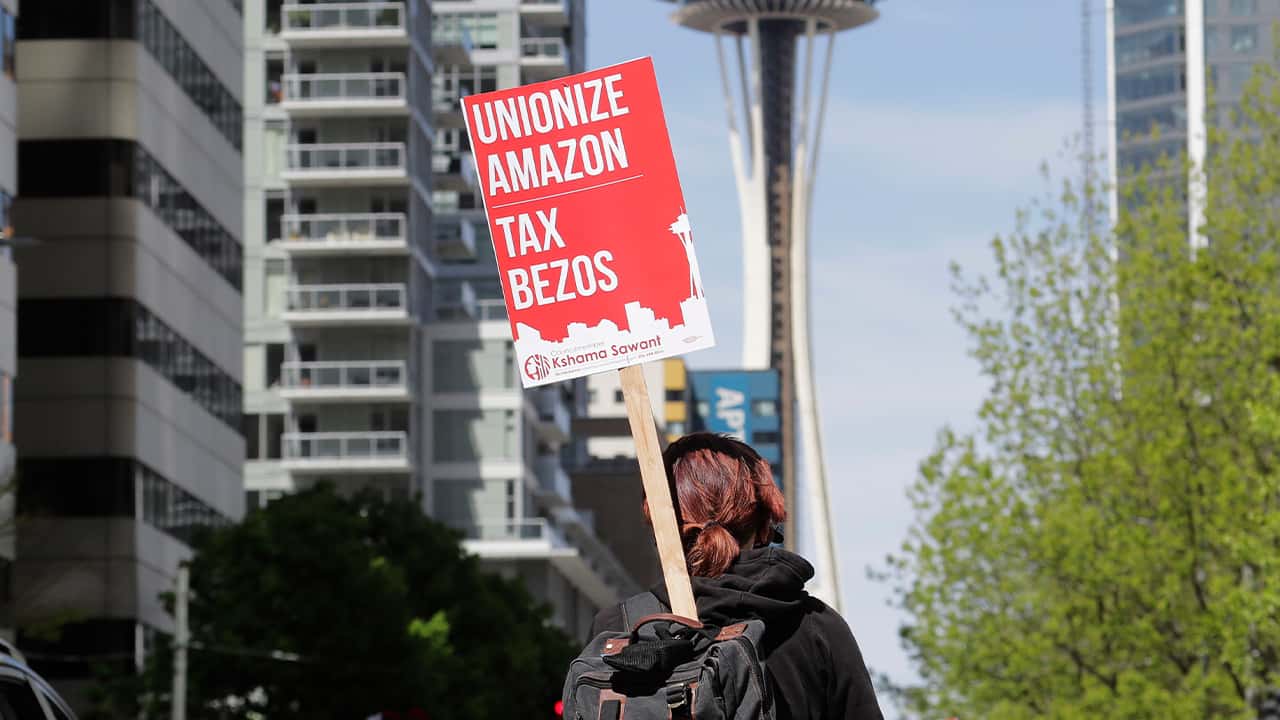 FILE – In this May 1, 2020, file photo, a protester carries a sign that reads “Unionize Amazon Tax Bezos,” in reference to Amazon founder and CEO Jeff Bezos, while riding a bike during a car-based protest at the Amazon Spheres in downtown Seattle. Mary’s Place, a family homeless shelter located nearby inside an Amazon corporate building on the tech giant’s Seattle campus, marks a major civic contribution bestowed by Amazon to the hometown it has rapidly transformed. But the Mary’s Place family homeless shelter also serves as a stark display of have-and-have-nots, given that some blame the tech giant’s explosive growth over the past decade for making living in Seattle too costly for a growing number of people. (AP Photo/Ted S. Warren)

Amazon’s decision to take in Mary’s Place, which has multiple locations around the region, Rankin said, means the company is ignoring the chronically homeless who are often suffering from mental health or addiction issues, who are the most expensive and controversial demographic to address.


Amazon’s decision to take in Mary’s Place, which has multiple locations around the region, Rankin said, means the company is ignoring the chronically homeless who are often suffering from mental health or addiction issues, who are the most expensive and controversial demographic to address.
Companies like Amazon could virtually eliminate Seattle’s tent cities if they helped fund more permanent affordable housing with social services managers to support those struggling the most, Rankin said.
Amazon’s real estate chief John Schoettler said the partnership between the company and Mary’s Place began when Amazon’s massive expansion of office space led it to acquire a former Travelodge hotel. Amazon in 2016 gifted it to Mary’s Place for one year while the company prepared to demolish and construct an office building. It later decided to give the nonprofit half of the new building permanently.
Yet to some local critics, the move was seen as too little, too late. Amazon and Bezos had long been accused of not being nearly as generous as other corporate giants in the region, such as Microsoft and its founder Bill Gates, the world’s most high-profile philanthropist.
The globally focused Bill and Melinda Gates Foundation has for years given to homelessness initiatives in the Seattle area. One of Gates’ first projects when the foundation started in 2000 was funding a $40 million family homelessness initiative that built more than 1,400 units of transitional housing in the region.
Meanwhile, Bezos’ wealth has funded high-profile side ventures including the space exploration company Blue Origin and The Washington Post newspaper.

Bezos this year also launched his personal $10 billion commitment to fight climate change called the Bezos Earth Fund, his largest donation to date. Amazon then bought the naming rights to a Seattle sports venue and officially renamed it “Climate Pledge Arena.” It’s a nod to the company’s push to get other companies to join it in being carbon neutral by 2040 and marks another unorthodox and unsubtle philanthropic gesture. Amazon’s growing portfolio of civic interests also includes funding a restaurant job training program and various school and educational causes.
Defending Amazon, Schoettler called Mary’s Place “an initial step” and that the company shouldn’t be blamed for Seattle’s homelessness crisis, as zoning laws restricting the building of housing and drug addiction are among the issues the city must first address.
“We want to be a part of the collective process of helping to solve problems. And I as person and as a longtime Seattleite, I don’t want to be blamed for issues when we’re trying to do some really good things,” Schoettler said.
This tension over what big businesses owe to their communities will always exist as long as there is inequity, said Nicole Esparza, a University of Southern California professor who studies urban inequality and philanthropy.
Though she suggested Amazon could better support the poor if it increased wages for its hourly warehouse workers, Esparza said Amazon still deserves credit for being innovative with its charitable contributions.
“Amazon doesn’t have to give to homelessness. And so it is a gift, and some people would say any gift is a gift,” Esparza said. “Who knows how long it will last?”

Related Topics:AmazonhomelessJeff Bezos
Up Next

Trump Wears Mask in Public for First Time During Pandemic