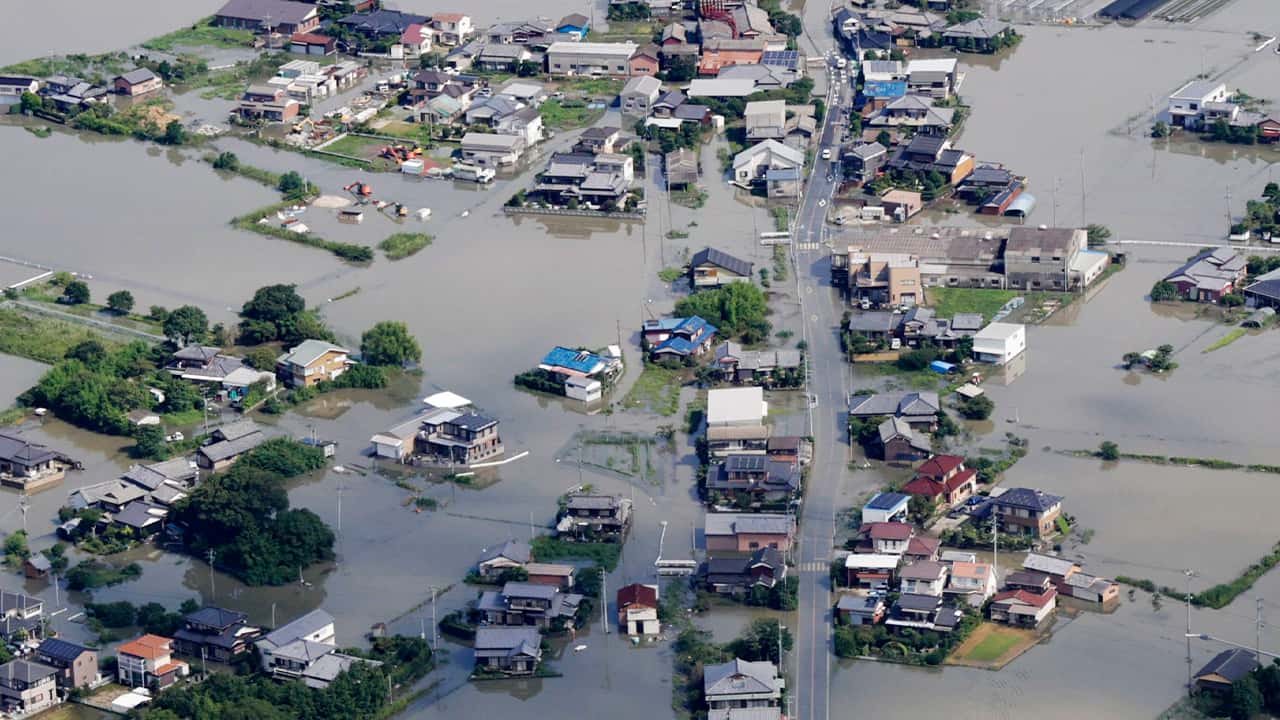 TOKYO — Pounding rain that already caused deadly floods in southern Japan was moving northeast Wednesday, battering large areas of Japan’s main island, swelling more rivers, triggering mudslides, and destroying houses and roads. At least 58 people died in several days of flooding.
Parts of Nagano and Gifu, including areas known for scenic mountain trails and hot springs, were flooded by massive downpours.
Public broadcaster NHK showed a swollen river gouging into its embankment and destroying a highway. In the city of Gero, the rising river was flowing just below a bridge.
Flooding and mudslides blocked parts of a main road connecting Kamikochi and Matsumoto, two major tourist destinations in Nagano, stranding hundreds of residents and visitors, though they were believed to have safely evacuated. In neighboring Gifu, hundreds were isolated in the hot spring towns of Gero and Ontake.
In the scenic mountainous town of Takayama, several houses were hit by a mudslide, but their residents were safely rescued.
As of Wednesday morning, the death toll from the heavy rains which started over the weekend had risen to 58, most of them from hardest-hit Kumamoto prefecture. Four others died in Fukuoka, another prefecture on Kyushu, Japan’s third-largest island.
At the peak, as many as 3.6 million people were advised to evacuate, although it wasn’t mandatory and the number who sought shelter was not known. About half of the advisories had been lifted by Wednesday afternoon.
In places where rain has subsided, residents were busy cleaning up their homes and workplaces.

In Gero, a man washed off mud at the entrance of his riverside house despite the evacuation advisory. “I was told to run away and my neighbors all went, but I stayed,” he said. “I didn’t want my house to be washed away in my absence.”
In Oita, teachers at a nursery school were wiping the floor and drying wet furniture. “I hope we can return to normal life as soon as possible,” Principal Yuko Kitaguchi told NHK.
As the rains pounded central Japan, flooding continued to affect the southern region. Search and rescue operations continued in Kumamoto, where 14 people remained missing.
Tens of thousands of army troops, police and other rescue workers mobilized from around the country to assist. Rescue operations have been hampered by the rains, flooding, mudslides and disrupted communications.
In Kagoshima, a pickup truck was hit by a mudslide and fell into the ocean, but the driver was airlifted out with a head injury, according to Fuji Television. In another town in Oita, two brothers in their 80s were extracted alive after a mudslide smashed into their hillside house, NHK said.
Chief Cabinet Secretary Yoshihide Suga urged residents to use caution. “Disasters may happen even with little rain where ground has loosened from previous rainfall,” he said.
Suga pledged continuing search and rescue efforts, as well as emergency funds for affected areas.
Japan is at high risk of heavy rain in early summer when wet and warm air from the East China Sea flows into a seasonal rain front above the country. In July 2018, more than 200 people, about half of them in Hiroshima, died from heavy rain and flooding in southwestern Japan.