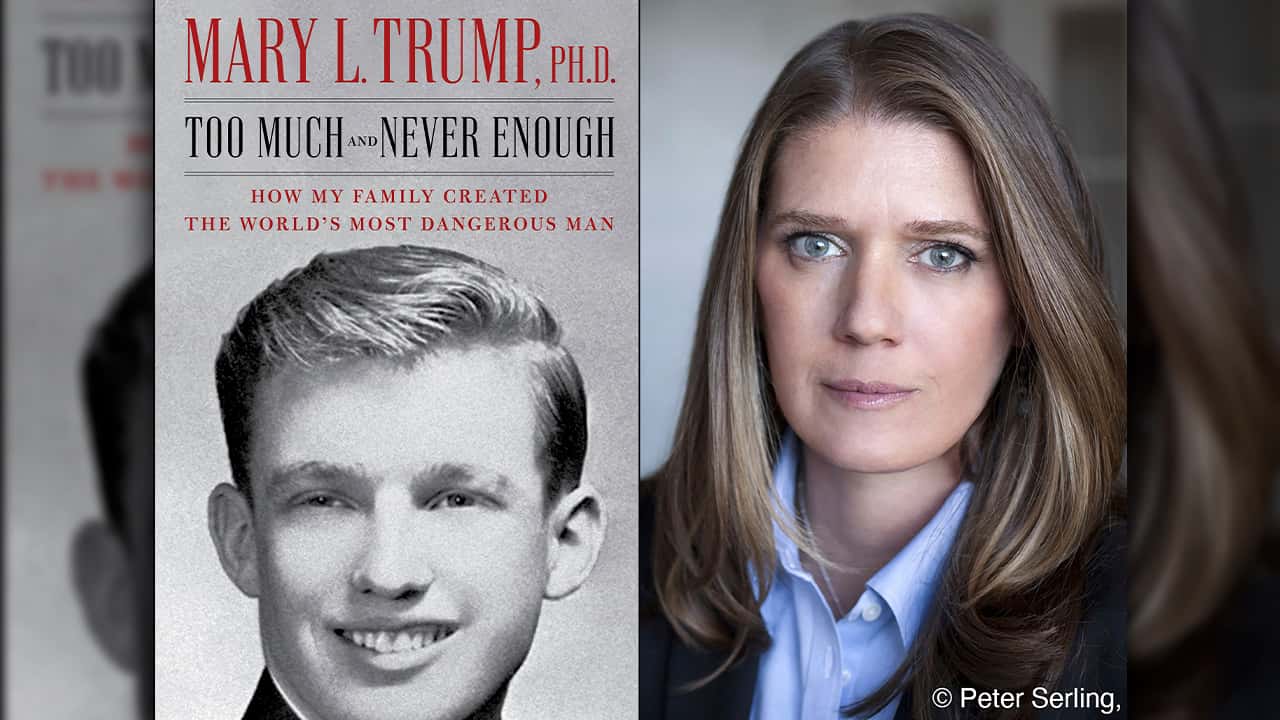 NEW YORK — President Donald Trump’s niece offers a scathing portrayal of her uncle in a new book obtained by The Associated Press Tuesday that credits a “perfect storm of catastrophes” for exposing the president at his worst.
Mary L. Trump, a psychologist, writes that the coronavirus pandemic, the possibility of an economic depression and deepening social divides have brought out the “worst effects” of Donald Trump’s pathologies, which were less evident when the country had a stable economy and the lack of serious crises.
Those factors, along with “Donald’s penchant for division, and uncertainty about our country’s future have created a perfect storm of catastrophes that no one is less equipped than my uncle to manage,” she writes in “Too Much and Never Enough, How My Family Created The World’s Most Dangerous Man.”
Mary Trump is the daughter of Trump’s older brother, Fred Jr., who died after a struggle with alcoholism at 42.
In the book, Mary Trump makes several revelations, including alleging that the president paid a friend to take the SATs — a standardized test widely used for college admissions — in his place. She writes that his sister, Maryanne had been doing his homework for him, but she couldn’t take his tests. Donald Trump worried that his grade point average, which put him far from the top of the class, would “scuttle his efforts to get accepted” into the Wharton School of the University of Pennsylvania, which he transferred to after two years at Fordham University in the Bronx.
“To hedge his bets he enlisted Joe Shapiro, a smart kid with a reputation for being a good test taker, to take his SATs for him. That was much easier to pull off in the days before photo IDs and computerized records. Donald, who never lacked for funds, paid his buddy well.”
And she writes, in awe, of Trump’s ability to gain the support of prominent Christians and White Evangelicals, saying, “The only time Donald went to church was when the cameras were there. It’s mind-boggling. He has no principles. None!”
Mary Trump traces much of her pain to the death of her father, who died when she was 16, and her grandfather Fred’s penchant, as she describes it, to sew division in the family.

“The atmosphere of division my grandfather created in the Trump family is the water in which Donald has always swum, and division continues to benefit him at the expense of everybody else. It’s wearing the country down, just as it did my father, changing us even as it leaves Donald unaltered,” she wrote. “It’s weakening our ability to be kind or believe in forgiveness, concepts that have never had any meaning for him.”
Trump, who rarely admits regret, told The Washington Post last year that he regretted having tried to pressure his brother to join the family business — something Fred, who had long wanted to be a pilot had no interest in doing.
“It was just not his thing. . . . I think the mistake that we made was we assumed that everybody would like it. That would be the biggest mistake. . . . There was sort of a double pressure put on him,” Trump told the paper.
Trump has also cited his brother’s struggle with alcohol as one of one of the reasons he doesn’t drink.
Publisher Simon & Schuster announced Monday that they would be publishing the book two weeks early, on July 14, citing “extraordinary interest.” The revised date came after a New York appellate court cleared the way for the book’s publication following a legal challenge.
Robert Trump, the president’s younger brother, had sued Mary Trump to block publication of a book, arguing in legal papers that Mary Trump was subject to a 20-year-old agreement between family members that no one would publish accounts involving the core family members without their approval.
A judge last week left in place a restraint that blocked Mary Trump and any agent of hers from distributing the book, but the court made clear it was not considering Simon & Schuster to be covered by the ruling.

In the book, Mary Trump said she didn’t take her uncle’s run for the presidency seriously when he first ran.
“’He’s a clown,’ my aunt Maryanne said during one of our regular lunches at the time. ‘This will never happen.’”
“I agreed,” Mary Trump wrote.
She said she declined an invitation to attend her uncle’s election-night party in New York City four years ago, convinced she “wouldn’t be able to contain my euphoria when Clinton’s victory was announced.”
Instead, she found herself wandering around her house a few hours after Trump’s victory was announced, fearful voters “had chosen to turn this country into a macro version of my malignantly dysfunctional family.”
She writes that current challenges have weakened the president’s usual tools for shielding himself from blame.
“His ability to control unfavorable situations by lying, spinning, and obfuscating has diminished to the point of impotence in the midst of the tragedies we are currently facing,” she writes.
“His egregious and arguably intentional mishandling of the current catastrophe has led to a level of pushback and scrutiny that he’s never experienced before, increasing his belligerence and need for petty revenge as he withholds vital funding, personal protective equipment, and ventilators that your tax dollars have paid for from states whose governors don’t kiss his ass sufficiently,” Mary Trump wrote.

White House press secretary Kayleigh McEnany said of the book: “It’s ridiculous, absurd accusations that have absolutely no bearing in truth. I have yet to see the book, but it is a book of falsehoods.”
White House counselor Kellyanne Conway said in an interview with Fox News that “there are too many books out there that are never fact-checked,” adding: “I believe family matters should be family matters.”