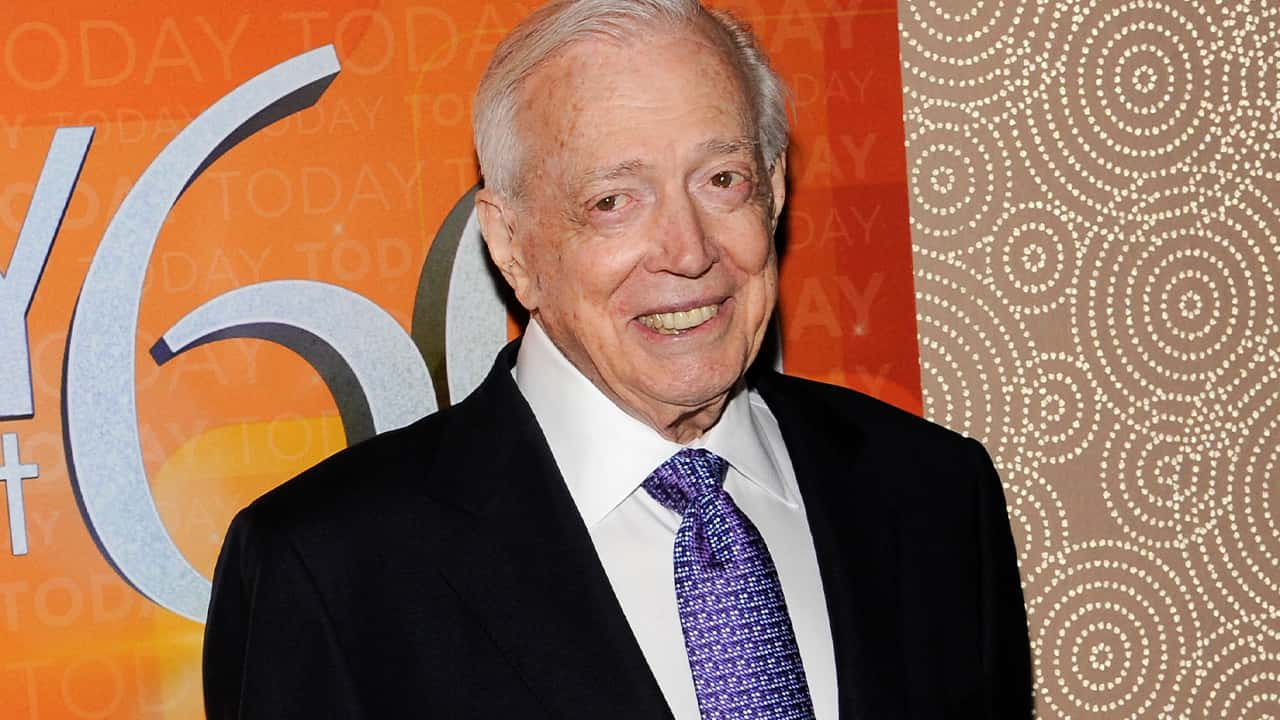 NEW YORK — Hugh Downs, the genial, versatile broadcaster who became one of television’s most familiar and welcome faces with more than 15,000 hours on news, game and talk shows, has died at age 99.
Downs died of natural causes at his home in Scottsdale, Arizona, on Wednesday, said his great-niece, Molly Shaheen.
“The Guinness Book of World Records” recognized Downs as having logged more hours in front of the camera than any television personality until Regis Philbin passed him in 2004.
He worked on NBC’s “Today” and “Tonight” shows, the game show “Concentration,” co-hosted the ABC magazine show “20/20” with Barbara Walters and the PBS series “Over Easy” and “Live From Lincoln Center.”
“I’ve worked on so many different shows and done so many shows at the same time,” Downs said in a 1986 Associated Press interview. “I once said I’d done everything on radio and television except play-by-play sports. Then I remembered I’d covered a boxing match in Lima, Ohio, in 1939.”
Downs began his broadcasting career at the age of 18 as a $12-a-week announcer on a small Ohio radio station. When television came along, he at first looked on it as a gimmick, but quickly realized “it was probably a juggernaut, and I’d better be in on it.”
He was an announcer in Chicago, which was a television incubator in the 1950, for “Kukla, Fran & Ollie” and “Hawkins Falls,” which he said was television’s first soap opera. In 1954, he went to New York for “The Home Show.”
In 1961, Newsweek described him as “a gluttonous reader with a first-rate brain that he keeps curried and exercised like a prize poodle.” 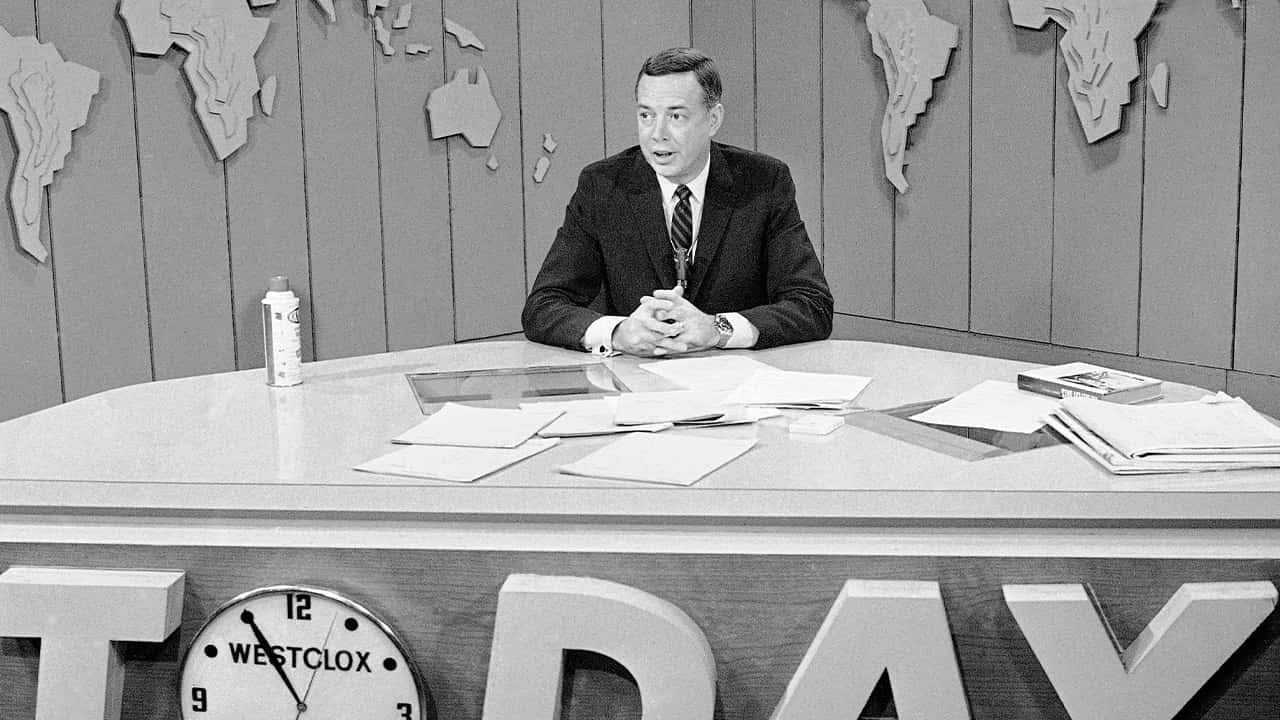 FILE – In this March 10, 1966 file photo, Hugh Downs hosts the “Today”show on NBC. Downs, a genial and near-constant presence on television from the 1950s through the 1990s, has died. His family said Downs died of natural causes Wednesday, July 1, 2020, in Scottsdale, Ariz. He was 99. Downs was a host of the “Today” show on NBC, worked on the “Tonight” show when Jack Paar was in charge, and hosted the long-running game show “Concentration.” (AP Photo/Jack Kanthal, File)

Downs Had a Particular Interest in Science

His reputation was such that he even won the right to approve any commercial he was assigned to read, striving to keep dubious claims off the air.
“My loyalty was with the person tuning in,” he said. “It was expedient. If I lost my credibility, what use would I be to a client?”
He showed his principled side again in 1997, when he took a vacation day on “20/20″ rather than be part on a show that included an interview with Marv Albert after the sportscaster was caught in a lurid sexual assault scandal.
Downs had a particular interest in science, once launching into a monologue on the Paar show on the science underlying water-skiing. It prompted Paar to quip, “Well, Hugh, when you drown, you’ll know the reason why.”
His interest in problems of the aging — he even earned a postgraduate degree in gerontology — was highlighted in his Public Broadcasting Service series “Over Easy” as well as many of his “20/20” pieces.
“We all suffer in our culture from the idea … that youth was the big thing,” he said.
“There has been kind of a loss of respect for older people, and we lose gleaning wisdom from older people. We lose the ability to see that impairment and decrepitude don’t necessarily go along with age.”
His work on “20/20″ also showed his adventurous spirit, such as the time he got to ride a killer whale, and another time he put on breathing apparatus to swim near a great white shark. There was a hazardous expedition to the South Pole in which one participant nearly fell to his death.

Downs Began His Work as PAAR’s Second Banana in 1957

“I’m interested in science, the environment, medicine and certain personalities,” he said. “I just do the stories I want to do. I don’t want to be just the anchor.”
Downs began his work as Paar’s second banana in 1957, after a stint as host of NBC’s “The Home Show.”
In a highly publicized incident in February 1960, Paar stormed off the air in a dispute involving network cutting a Paar “water closet” (toilet) joke the censors disliked. Downs won praise for calmly telling the audience “I’d like to think this is not final” and keeping the live show running until signoff time.
Downs said later that he expected that Paar would at any minute return to the stage “with some punch line or something. He didn’t.” But Downs said he was eventually grateful for the boost the brouhaha gave his career.
Paar finally returned to the show a few weeks later.
Paar’s departure from “Tonight” in 1962 paved the way for Johnny Carson. Downs, meanwhile, began his nine-year run as host of the “Today” show. Walters was a “Today” colleague for part of that time. She admired Downs and praised his generosity and collegiality.
He expressed his views modestly in the 1995 book “The Box: An Oral History of Television, 1920-1961”: “In a way the less talent you have or deploy, the less chance you have of overexposure. That may be why I have been on network television more than anybody in the world.”

Related Topics:Hugh Downs
Up Next