CHARLOTTE, N.C. — They didn’t like it when then-candidate Donald Trump criticized John McCain for being captured in combat. They were angrier when Trump, as commander in chief, abandoned Kurdish allies in the Middle East. And they were upset again last month when he threatened to deploy troops against American protesters.

Trump’s relationship with the nation’s military community has been frequently strained. But just four months before the November election, reports that he either ignored, or was unaware of, a Russian plot to kill U.S. troops could intensify the tension and create new political risks.

“I don’t think he cares about troops at all. If he didn’t know about Russia, it’s because he didn’t do his damn homework. And that’s despicable.” — Shawn LeMond, a Navy veteran who served his country in the Middle East and then his state of North Carolina as a Republican legislator

“I don’t think he cares about troops at all,” said Shawn LeMond, a Navy veteran who served his country in the Middle East and then his state of North Carolina as a Republican legislator. “If he didn’t know about Russia, it’s because he didn’t do his damn homework. And that’s despicable.”

After sitting out the 2016 election, LeMond has withdrawn from the Republican Party and plans to vote for Trump’s Democratic opponent, Joe Biden, this fall.

It’s difficult to gauge how widespread LeMond’s sentiment is among veterans, but there was a significant outcry this week from a collection of retired service members, elected officials in both parties and families of fallen soldiers who have lost confidence in the president’s commitment to the troops. That’s just four weeks after Trump’s former defense secretary James Mattis, a Marine general, described the president as a threat to the Constitution.

Any erosion in Trump’s support from the national security community, long a pillar of the GOP base, could damage his reelection prospects, particularly in swing states with large concentrations of veterans, including Florida, Virginia, Texas and North Carolina.

Rep. Richard Hudson, R-N.C., whose district includes Fort Bragg, acknowledged the troubling nature of the revelations, but like many other Republicans on Capitol Hill, he sidestepped Trump’s role.

“There is no consensus on the intelligence yet, but as Fort Bragg’s congressman, I’m deeply troubled by the reports,” he said. “And if they are verified to be true, I believe there needs to be swift and severe consequences on Russia.” 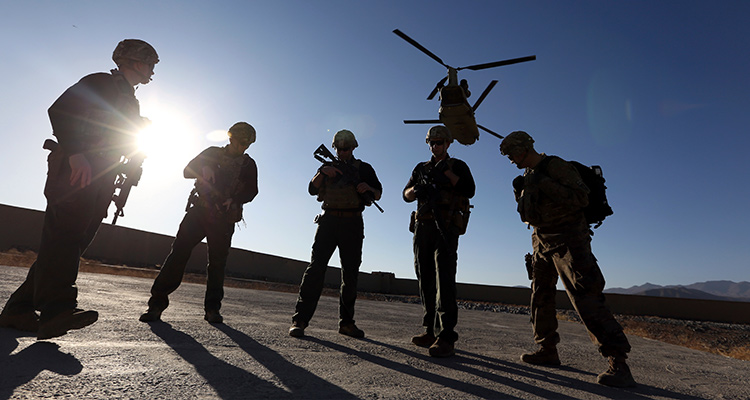 FILE – In this Nov. 30, 2017 file photo, American soldiers wait on the tarmac in Logar province, Afghanistan. Top officials in the White House were aware in early 2019 of classified intelligence indicating Russia was secretly offering bounties to the Taliban for the deaths of Americans, a full year earlier than has been previously reported. (AP Photo/Rahmat Gul, File)

Trump on Wednesday Dismissed the Allegations as ‘Fake News’

American intelligence has assessed that Russia offered militants bounties to kill American troops in Afghanistan. Initial intelligence was shared with the White House and included in one of Trump’s daily briefings in early 2019. In spite of that, Trump has maintained a warm relationship with Russian leader Vladimir Putin throughout his presidency.

“Make no mistake. This president will always protect American troops,” she declared.

Those words rang hollow to some who serve the military community, like Rep. Paul Cook, R-Calif., a Marine veteran who represents several military installations and is retiring at year’s end.

“I’m not really sure he absorbs a lot of this stuff,” Cook told The Associated Press of reports that Trump was briefed on the bounties. “He’s probably thinking about the polls.”

Cook added: “I’m not going to be an apologist for Trump. Trump is Trump.”

Biden leaned into the debate Tuesday, calling the Trump administration’s handling of the Russian intelligence “an absolute dereliction of duty.”

As he often does, Biden reflected on his own son’s military service in Iraq. The developments were even more personal for potential Biden running mate Sen. Tammy Duckworth, a former Army lieutenant colonel who lost her legs in a helicopter crash in Iraq.

“It’s deeply personal, it’s nauseating, and it’s obscene,” Duckworth, D-Ill., said of Trump’s muted response to the Russian bounties, which she cast as evidence that the commander in chief doesn’t value the well-being of American troops. “I think the only thing President Trump cares about is his own reelection and his own well-being.”

The most poignant reactions, however, didn’t come from politicians.

Some of the Military Community Continue to Support Trump

Erik Hendriks lost his 25-year-old son in an April 2019 attack that intelligence officials believe may be tied to the Russian bounties. The New York man said the pain of his son’s death would be even worse if there were bounties on American soldiers that the Trump administration didn’t address.

“When they sign up and they go — any soldier, a Marine, Navy, Air Force, Army — I’m sure they want to believe that the government is 100% in their corner,” Hendriks told the AP. “And if any of this is true, how could a soldier actually believe that anymore? How could this government let one soldier go on patrol out there knowing this is true?”

“When they sign up and they go — any soldier, a Marine, Navy, Air Force, Army — I’m sure they want to believe that the government is 100% in their corner. And if any of this is true, how could a soldier actually believe that anymore? How could this government let one soldier go on patrol out there knowing this is true?” — Erik Hendriks, who lost his 25-year-old son in an April 2019 attack that intelligence officials believe may be tied to the Russian bounties

Those questions resonated with Matthew Whitney, a retired Army intelligence officer who worked in the Pentagon and now lives in Florida, a must-win state for the president.

The 55-year-old Orlando man said the Trump administration clearly didn’t prioritize vital intelligence on Russia, which speaks either to the president’s leadership or to the people he surrounds himself with. He said he voted for Trump four years ago and wouldn’t do it again.

“I feel like when this president stands in front of the troops — there’s probably a part of his heart that cares for them — but I wonder to what extent they’re basically just props for him to talk about himself,” Whitney said.

He admitted, however, that many of his close friends from the military community continue to support Trump.

That’s the case in the Bush household near Fort Bragg, where Robyne Bush, the mother of a soldier in basic training and the wife of a retired Green Beret, shrugged off the latest revelations as old news.

“We knew this. It’s not a secret,” said Bush, an Army veteran herself, who has helped comfort nearly 20 families of fallen soldiers.

She voted for Trump in 2016 and vowed to do so again, praising his support for service members and the Veterans Administration.

“I don’t like him as a person. I don’t like that personality,” Bush said. “But I think that he knows more than he ever lets on.”