The state of California’s recommendation for liquor store licenses is one for every 2,500 residents.

“They saturated south Fresno with liquor stores to the point that liquor stores and convenience stores have to sell alcohol at a cheaper rate than they sell bottled water. Right now, I could walk into Wayne’s Liquor and buy a 40-ounce of malt liquor for 89 cents while a 12-ounce bottle of water would cost me $1.30 or $1.25.” — Fresno City Council President Miguel Arias

In Fresno, it’s one liquor license for every 1,000 residents.

“When you drive down the street in south Fresno, there’s a liquor store on each corner of an intersection,” says Fresno City Council President Miguel Arias.

In response, Arias is proposing a stronger liquor-license ordinance than the one passed last year by the council.

His goal: Turn the tide and provide a more equitable solution for the entire city.

“They saturated south Fresno with liquor stores to the point that liquor stores and convenience stores have to sell alcohol at a cheaper rate than they sell bottled water. Right now, I could walk into Wayne’s Liquor and buy a 40-ounce of malt liquor for 89 cents while a 12-ounce bottle of water would cost me $1.30 or $1.25.”

“The neighborhoods in which they operate, and they become a magnet for crime, a magnet for calls for service,” Arias says of the liquor stores.

Related Story: The Days of Rubber-Stamping Liquor Licenses Are Over 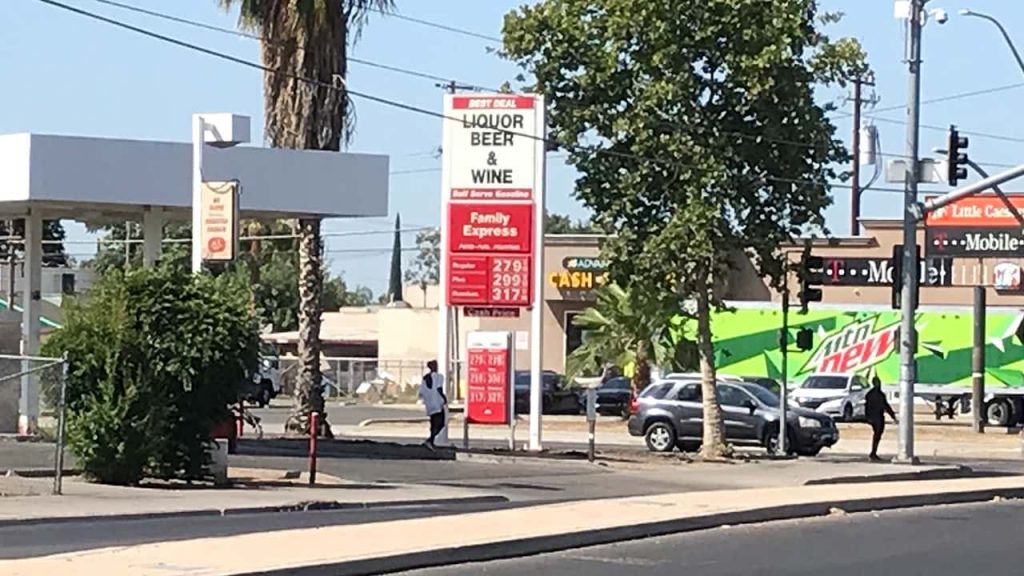 An Advance America payday lender sits in the shadow of a liquor store on Fresno Street in Southwest Fresno. (GV Wire/Jim Jakobs)

Arias says one of the “worst” liquor stores in his district is Wayne’s Liquor near Edison High School and Franklin Head Start.

“We fined them this year a couple of times for operating outside of their conditional use permit,” the councilman said.

GV Wire℠ attempted to contact Wayne’s Liquor by phone but could not find a working number.

The Fresno City Attorney’s office provided this list of complaints about Wayne’s Liquor going back to Jan. 1, 2019. (The city attorney’s office says that a case is closed when the business is in compliance) 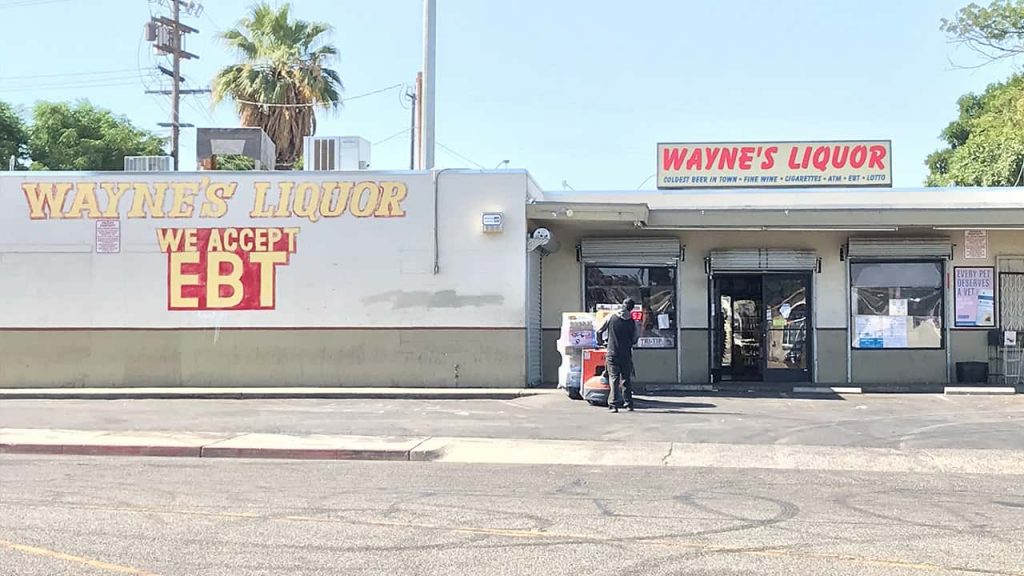 “Parkway Liquor is also one of those places that have had the highest calls for service,” says Arias. “It’s also a known meeting location for all the pimps on Motel Drive. That’s where the sex workers get deployed from.”

GV Wire℠ contacted Parkway Liquor. A man answered the phone and said, ” “We don’t have to work with the city. We have no problems at all.” He hung up before giving his name or title.

The city attorney’s office provided this list of complaints about Parkway Liquor dating to Jan. 1, 2019.

GV Wire℠ contacted Parkway Liquor. A man answered the phone and said, ” “We don’t have to work with the city. We have no problems at all.” He hung up before giving his name or title. 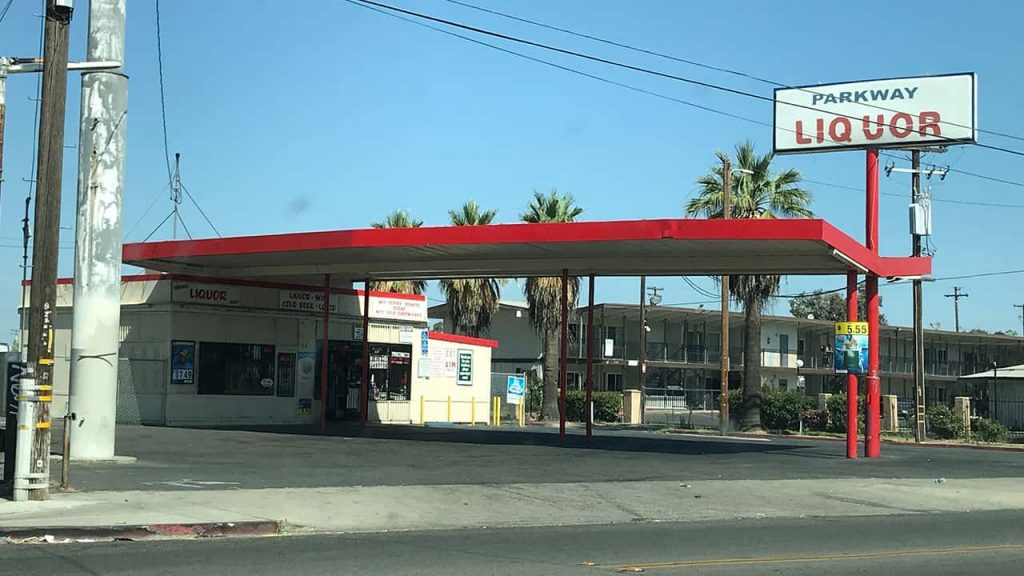 The council in 2019 passed a recommended ordinance — the Safe Market Neighborhood Ordinance — requiring that new businesses wanting to sell liquor in Fresno must purchase an existing license rather than add another.

Depending on the size of the establishment, multiple liquor licenses might be required.

Examples for new establishments would include:

Another stipulation in the ordinance was to deny a conditional-use permit to a new business if granting it would result in the number of sites selling alcohol for off-site consumption exceeding one license for every 2,500 residents.

The problem is, Arias says, that ordinance can be circumvented.

“So that, you know, a council or a planning commission can just, you know, completely, create an exemption,” says Arias.

In the coming months, several committees such as the airport district and planning commission are looking at ways to make the ordinance permanent.

Arias believes the process should ultimately wind up back at the city council by August.

This is the ordinance passed by the council in 2019.

Christina Garcia, 17, of Roosevelt High School helped pass the Responsible Neighborhood Market Ordinance. She is part of the Friday Night Live program at the Youth Leadership Institute. FNL focuses on conducting research and creating projects to reduce underage drinking and drug use among minors.

“As a young person, I encourage the city council to decrease the amount of liquor stores and alcoholic beverages to young people as we are already oversaturated with liquor stores in the city,” said Garcia.

In 2019, FNL youth leaders conducted a storefront assessment of 17 liquor stores — Sunnyside High School is surrounded by 20 liquor stores within a mile of the campus. Eleven of the 17 stores advertised alcohol and had more than 15% of alcohol ads as permitted.

In addition, 66% of Fresno County youth reported seeing one or more alcohol ads a day. Studies have shown that the more young people are exposed to alcohol marketing, the more likely they are to start drinking.

Here is the presentation the Youth Leadership Institute helped put together for the council.

Payday Lenders Next on Arias’ Radar

“We have a saturation of payday lenders,” says Arias about his district. He says one of the reasons is because banks have avoided opening in several parts of his district, including southwest Fresno. Payday lenders have moved in to fill in those gaps.

Arias says he used a payday lender when he was in college to make ends meet. He says a big problem that will likely manifest itself as a result of the pandemic’s economic turmoil is the amount of collateral people must put up — a car, for example, to get one of these high-interest loans.

“We’re going to see a lot of cars being turned over, and a lot of people losing their livelihoods because they’ve taken out a loan on a deteriorating asset,” says Arias.

As to whether the city council will do something similar with payday lenders as they’ve done with liquor stores remains on his to-do list.

“After we get the structural changes on the liquor stores and motels,” he says.

According to CalMatters, southwest Fresno is teeming with payday lenders, while its only bank is in Chinatown.