You may not know his name or the reason he waves, but if you’ve driven through Oakhurst anytime since 2004 you’ve probably seen him.

Bill Howie sits in his walker just outside the Oakhurst CHP office and inspires honks from cars going by as he waves at them. 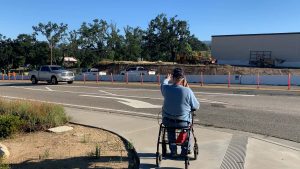 “I just wanted to say good morning to everybody.” — Oakhurst “waver” Bill Howie

“He’s been out here waving at motorists since the Ferguson fire just to say ‘Good Morning’ to everyone to brighten their day,” says CHP officer Jason Bettini.

The record number of honks he’s counted in a single day is 168. He usually averages 70 to 90 honks per day.

“He’s been doing this for years and everyone in the mountains knows he does this,” says Sarah Jackson of the Madera County Sheriff’s Office.

“I just wanted to say good morning to everybody,” says Howie, a World War II veteran who is 94 years old and legally blind. “It made it kind of hard with my eyesight. I can’t see inside the car and see them waving, so I asked them to beep.”

Raised in Bakersfield, Howie operated Howie Brothers Auto Parts and Machine Shop in Fresno after the war with his brother Laurence. Later on, he opened Mountain Auto Parts in Oakhurst.

Howie says he’s moving to Clovis next month to live with his daughter. Sadly, his waving days are ending.

“I’ll be with my daughter in her house and I won’t be doing anything like that down there,” said Howie.

The sheriff’s office and the CHP are taking part in a parade for Howie on Friday, July 17.

A short parade will begin at 7:45 a.m. and conclude after passing the CHP office at Redbud Drive.