Supreme Court to Decide the Future of the Electoral College 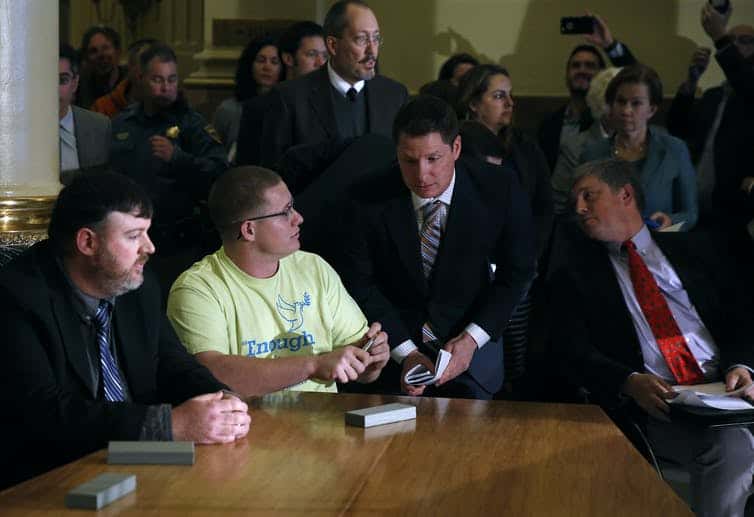 Many Americans are surprised to learn that in U.S. presidential elections, the members of the Electoral College do not necessarily have to pick the candidate the voters in their state favored. 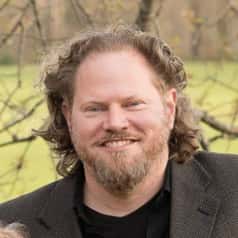 This month the Supreme Court will rule on the independent powers of electors, which will determine the meaning of the Electoral College in contemporary American politics.

The constitutional system of presidential selection is a set of uneasy compromises worked out at the very end of the Constitutional Convention in 1787.

The framers could not decide whether the choice of a president should be made by Congress or the states.

And they didn’t agree whether a state’s choice should be made by local elites (state legislators) or the masses (all of the voters).

In the end, the Committee on Unfinished Parts created a unique governmental structure that compromised on all of these debates. Unlike many contemporary Americans, the founders were comfortable with such compromises and immediately approved the new mechanism of presidential selection.

A small number of citizens called electors would meet in each state to decide the presidency collectively. Congress would enter the picture only if the electors did not reach a majority decision. The number of electors would equal the number of senators and representatives in Congress, which means that small states had greater power than their population would suggest, but still not as much as big states.

State legislatures could use their discretion about how to choose electors, which could result in elitist or popular forms of democracy in different states. Pennsylvania held a popular election in the very first presidential contest, allowing voters to choose electors aligned with the emerging parties. Some state legislatures appointed electors themselves until the mid-1800s.

As Americans embraced popular democracy in the decades following the founding, most people began to expect a majority vote in the state would determine its choice. In most states, the legislature gives the winning party the duty of choosing electors – who typically are party members who have pledged to vote for their party’s presidential candidate during a public meeting of the Electoral College in December.

When that happens, the state’s Electoral College votes go to the winner of the state’s popular vote. But it is possible for an elector to vote for someone else – which is why there is a case before the Supreme Court.

What Are ‘Faithless Electors’?

When Donald Trump won enough states in November 2016 to be elected the 45th U.S. president, opponents turned to the Electoral College as a last attempt to alter the election’s result. This became known as the Hamilton Electors movement. 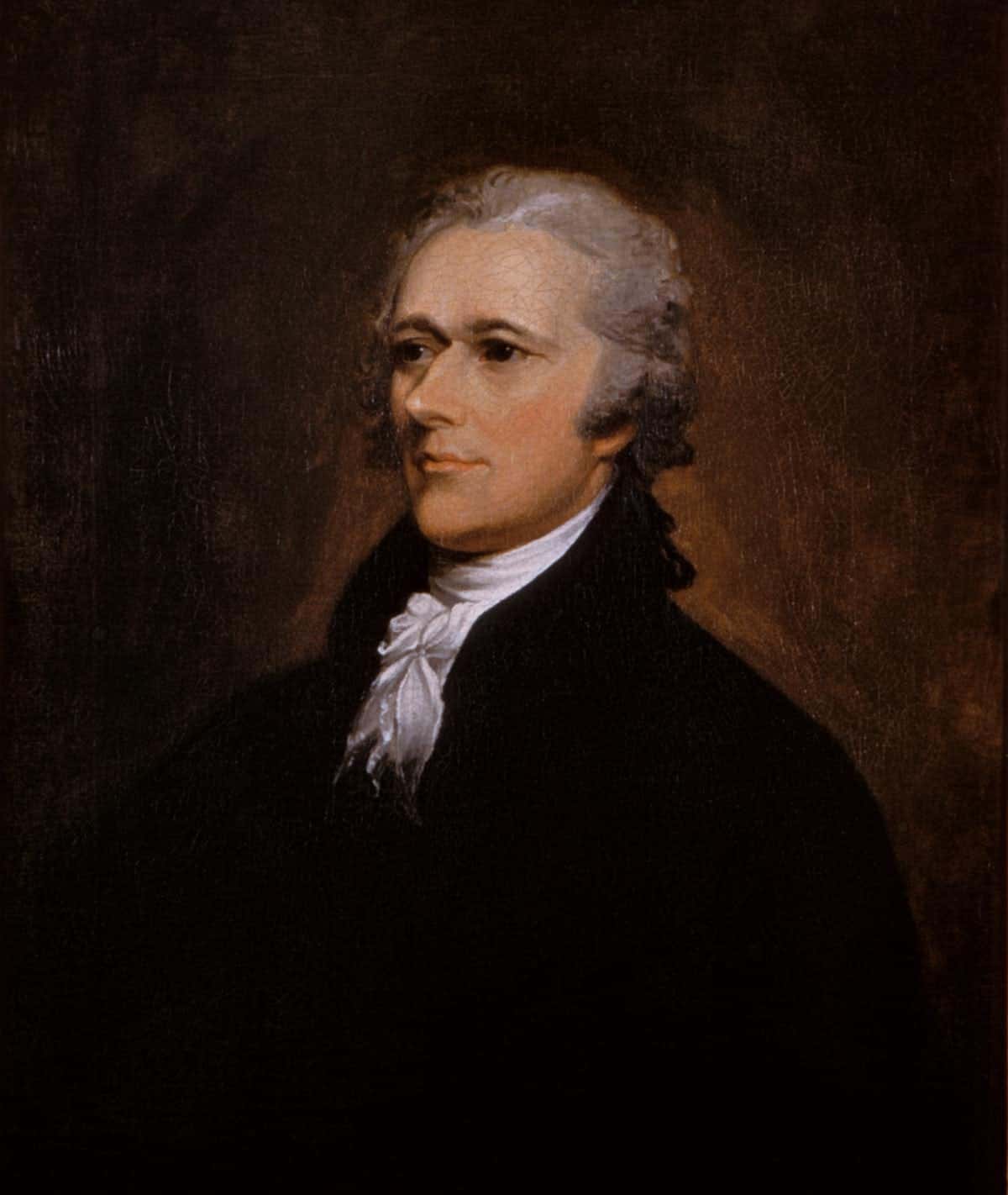 Alexander Hamilton was an advocate of elitist democracy who did not trust ordinary people to vote. He also thought highly of the Electoral College. In Federalist 68, he asserted that “if the manner of it be not perfect, it is at least excellent.”

His reason was that the selection of the president would reflect only “the sense of the people,” but truly be made by “a small number of persons, selected by their fellow-citizens from the general mass.”

In Hamilton’s view, these electors would hold the necessary “information and discernment,” while the masses would likely vote for a president with the “talents for low intrigue, and the little arts of popularity.”

The Hamilton Electors’ explicit goal in 2016 was to convince enough electors to cast “faithless” votes – against the election results of their state – to switch the outcome. Several celebrities, including Martin Sheen, who played the president of the U.S. in “The West Wing,” urged Republican electors to be “an American hero” by blocking Donald Trump from winning. 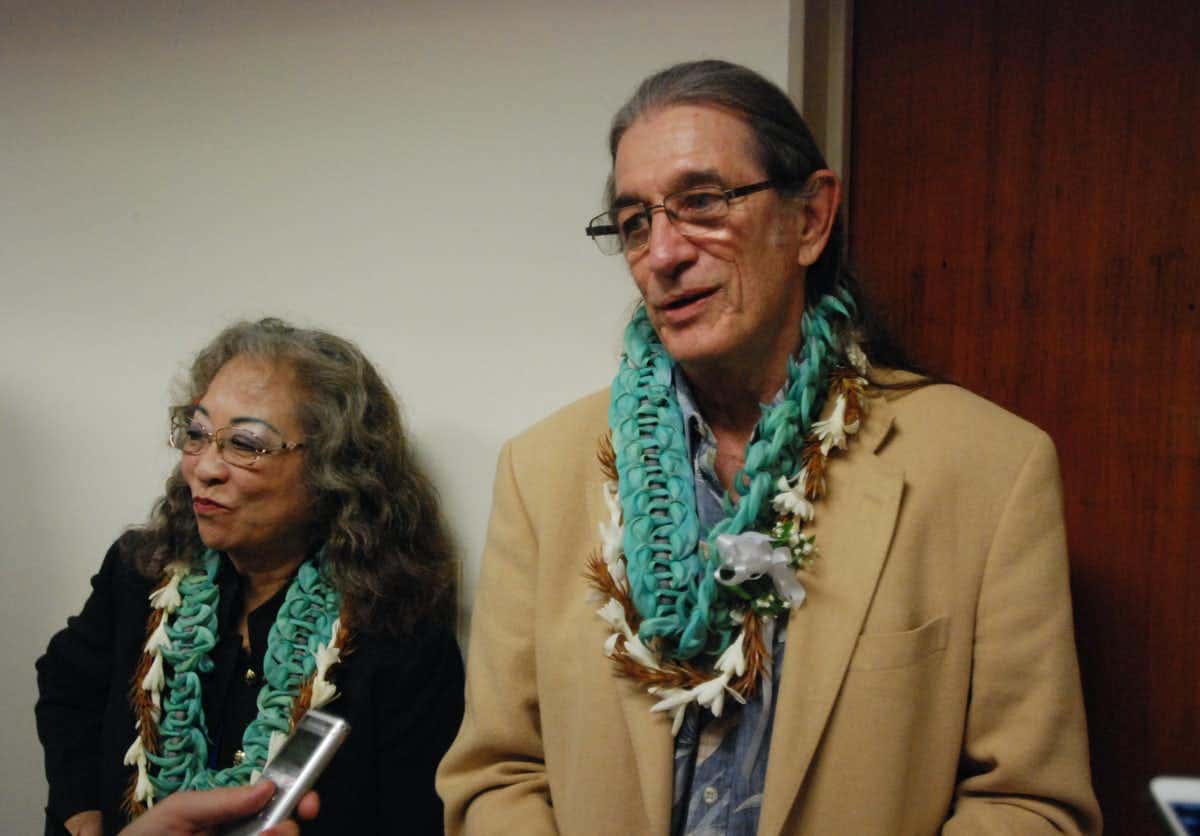 David Mulinix, an elector in Hawaii in 2016, cast his ballot for Bernie Sanders, though Hillary Clinton won his state. (AP Photo/Cathy Bussewitz)

Trump’s official tally in the Electoral College was 304 to Hillary Clinton’s 227. That doesn’t add up to 538 – the total number of electoral votes – because seven electors were unfaithful to their state’s popular decisions. Two Republican electors went their own ways, casting their ballots for John Kasich and Ron Paul. Five Clinton electors also refused to vote with their states’ majorities: Three chose former Secretary of State Colin Powell and one each chose Sen. Bernie Sanders and Native American activist Faith Spotted Eagle.

Those seven electors were not enough to change the outcome. But what if they had been? 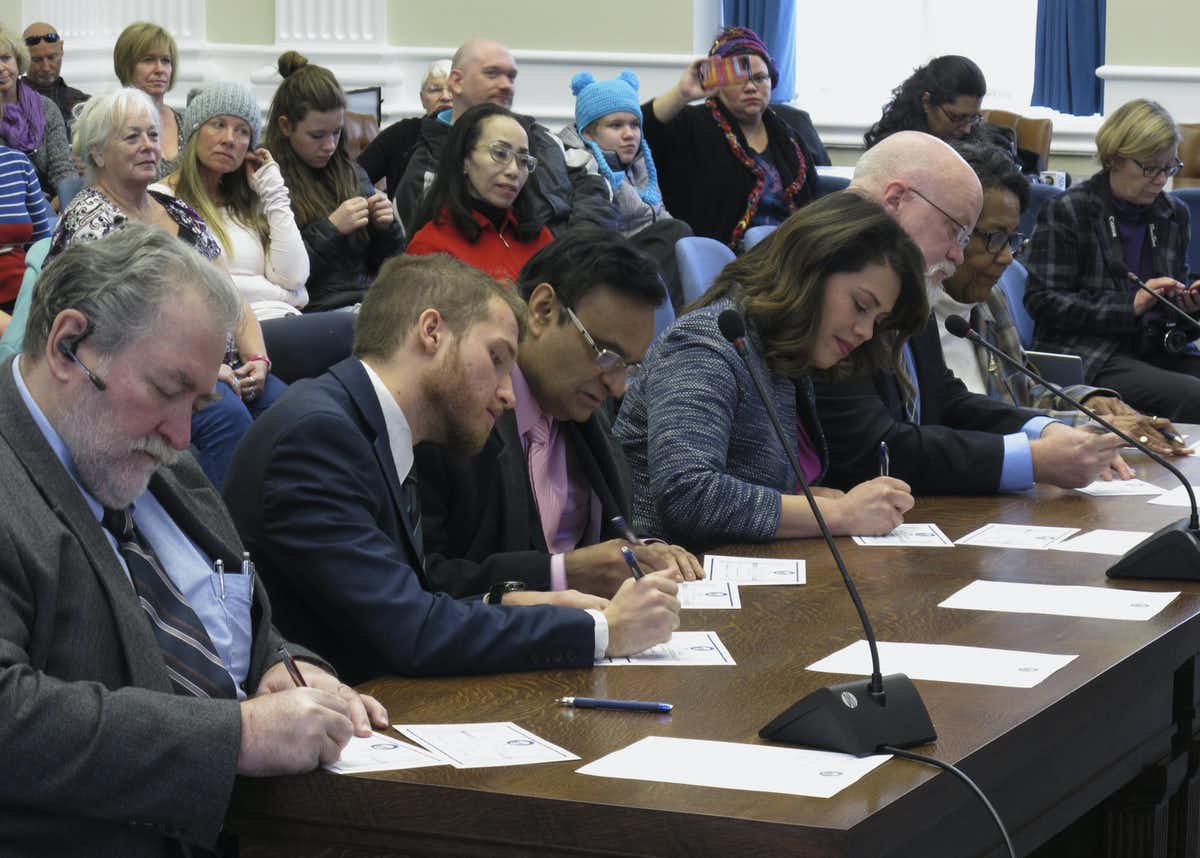 Most of the country’s electors did as these six, from Nevada, did in 2016, and voted for the candidate who won their state’s popular vote, regardless of whom they had personally backed. (AP Photo/Scott Sonner)

What Do Faithless Electors Mean for 2020?

The outcome in 2020 may be closer than in 2016. If Joe Biden wins a few states that Hillary Clinton did not – say Pennsylvania and Arizona – but Trump holds on to the rest of his 2016 states, the Electoral College outcome will be remarkably close. By my count, it could be 274 to 264 in the Electoral College. If it is that close, even a small number of faithless electors could change the outcome.

If Americans believe on Nov. 3, 2020, that one person has been elected the next president, but find out on Dec. 14 that it is going to be a different person, it is difficult to predict what the public will think – or do.

Faithless Electors at the Supreme Court

Even before the 2016 election, some states had tried to limit the discretion of electors. Colorado passed a law that allowed faithless electors to be replaced immediately with an alternate, and Washington imposed a US$1,000 fine for electors who voted differently from the public at large. Two faithless electors – Michael Baca and Peter Chiafalo – challenged the ability of states to restrict their discretion under the Constitution.

The debate at the court is about whether the U.S. still has elements of an elite democracy that cannot be altered by individual states, or if state legislatures can create a popular democracy within their borders by making electors simply registrars of the popular will – even though the constitutional text (and Alexander Hamilton’s plans) may suggest that electors should make their decisions freely.

What the Hamilton Electors are saying is that the old idea of an occasional block to the popular will is still useful. In their view, the rise of populism has made the old elitism important again. 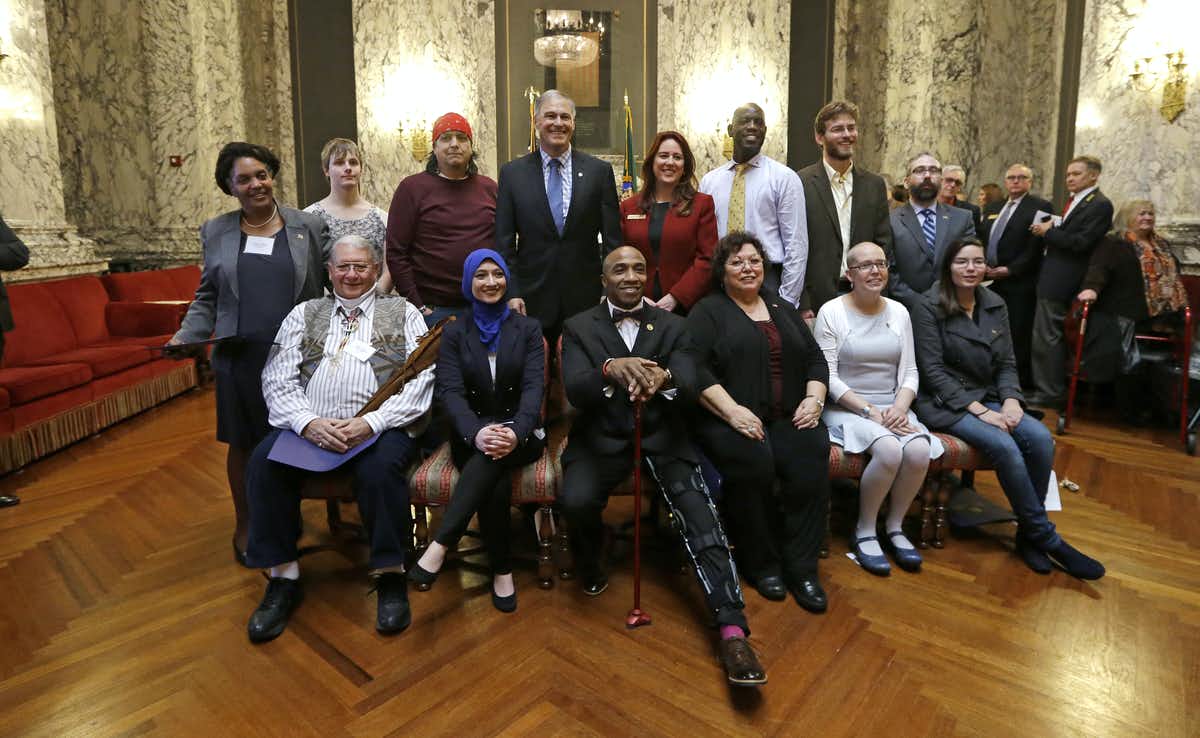 Washington electors and state officials pose after meeting on Dec. 19, 2016. Four of the state’s 12 electors cast their votes for someone other than state popular-vote winner Hillary Clinton. (AP Photo/Elaine Thompson)

The supporters of faithless electors are taking a position grounded in the intent of the framers, the usually conservative theory known as originalism.

But that interpretation of originalism runs up against another one: The founders let states decide how to pick electors.

These two originalist positions divide between a higher regard for the original purpose of electors and the original means of selecting and regulating them.

On the other hand, the usual liberal position – living constitutionalism – is clear. It supports the idea that the U.S. has evolved into a popular democracy regardless of the original intent. Binding electors to the vote of the state is simply the mechanism to achieve the representative elections that most Americans believe the country already has.

If the states win, they will be allowed to set the future rules for how electors may vote. If enough states bind electors, then the election will proceed as the public expects. But if the faithless electors win, the 2020 election results may be unclear far beyond Election Day.

How Much is Our Personal Data Worth?