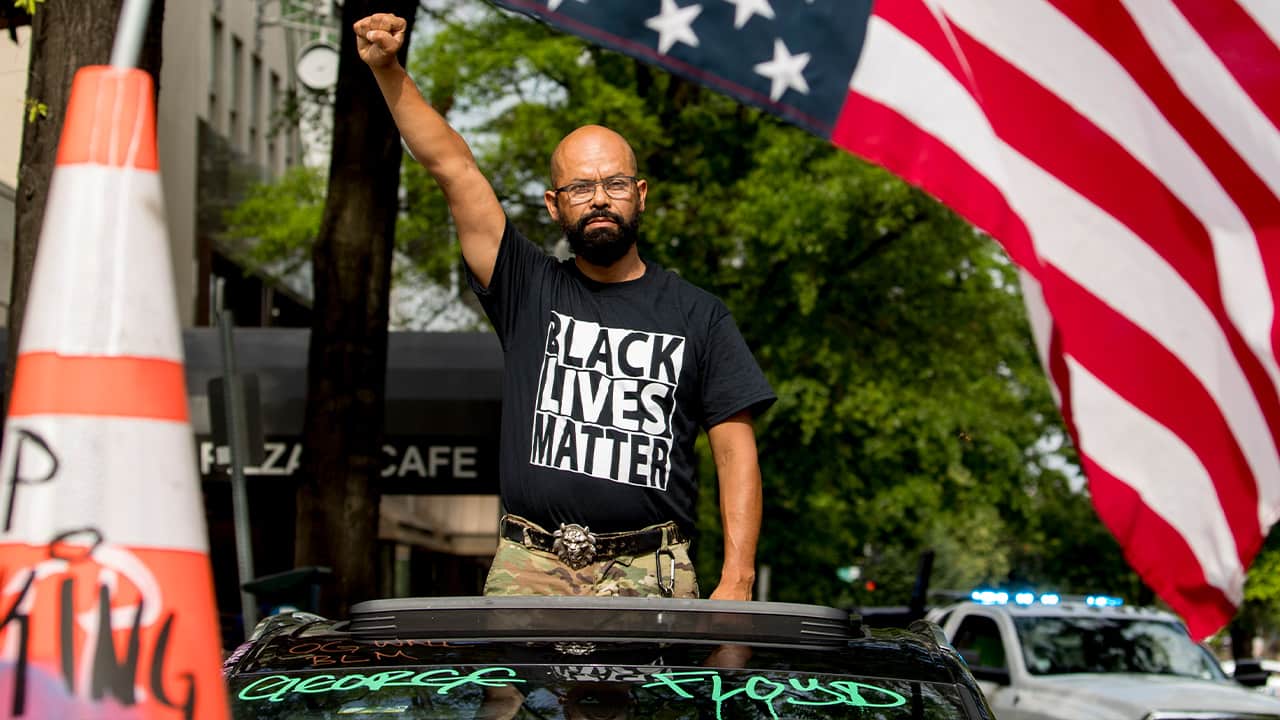 NEW YORK — Ahead of the Juneteenth holiday weekend’s demonstrations against systemic racism and police brutality, a majority of Americans say they approve of recent protests around the country. Many think they’ll bring positive change.
And despite the headline-making standoffs between law enforcement and protesters in cities nationwide, the poll from The Associated Press-NORC Center for Public Affairs Research also finds a majority of Americans think law enforcement officers have generally responded to the protests appropriately. Somewhat fewer say the officers used excessive force.
The findings follow weeks of peaceful protests and unrest in response to the death of George Floyd, a black man who died pleading for air on May 25 after a white Minneapolis police officer held his knee on Floyd’s neck for nearly eight minutes. A dramatic change in public opinion on race and policing has followed, with more Americans today than five years ago calling police violence a very serious problem that unequally targets black Americans.
Bill Ardren, a 75-year-old retired resident of Maple Grove, Minnesota, a suburb of Minneapolis, said he supports the protests. He blames protesters and law enforcement equally for why some Floyd demonstrations turned into ugly clashes that were scarred by looting and arson.
“People finally got fed up because of this last incident,” said Ardren, referring to Floyd’s death, “and it spread all over the country.”
The new AP-NORC poll finds 54% of Americans say they approve of the protests, while 32% disapprove. Another 14% say they hold neither opinion.
More Americans think the protests will mostly change the country for the better than bring about negative change, 44% to 21%, while a third say the protests won’t make much difference.
An Associated Press tally of known arrests through June 4 found that more than 10,000 people were arrested at demonstrations in the U.S., many of which defied citywide curfews and some daytime orders to disperse. The count grew by the hundreds each day, as protesters were met with overwhelming shows of force by local officers, state police and National Guard members. Los Angeles had more than a quarter of the nation’s arrests, according to the AP’s tally, followed by New York, Dallas and Philadelphia. 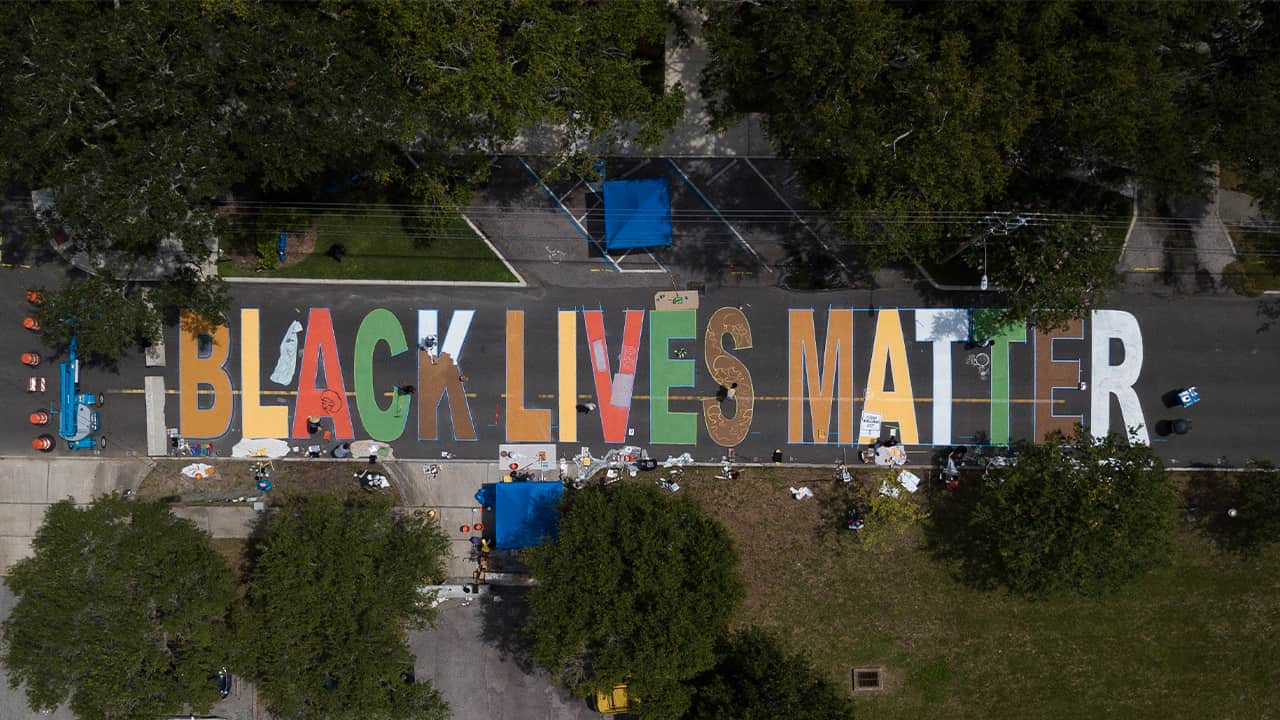 Local artists collaborate on painting a Black Lives Matter street mural in front of the Dr. Carter G. Woodson African American Museum, in St. Petersburg on Thursday, June 18, 2020. The mural will be ready when the city of St Pete kicks of its Juneteenth celebrations on Friday morning. (Dirk Shadd/Tampa Bay Times via AP)

One of the nation’s largest demonstrations took place in Philadelphia on June 6, when tens of thousands of people met near the Philadelphia Museum of Art and peacefully marched through Center City. Kipp Gilmore-Clough, a resident of the city and associate pastor at Chestnut Hill United Church, joined that day’s protest and said that kind of response to police abuse was “long overdue.”
“I’ve been fairly heartened by the ongoing presence in the streets, because the systemic racism that has generated these protests is longstanding and deeply embedded,” said Gillmore-Clough, who’s among those who believe the protests will have a positive impact. “My hope is that this persistence leads to results, changes of laws, changes of institutions and changes to our patterns that have normalized white supremacy.”
Seven percent of Americans say they’ve participated in a protest in the past few weeks. While black Americans were significantly more likely to say so than white Americans, the poll found about half of all those who said they protested were white. The demonstrations have been noted as remarkably diverse compared with those seen as affiliated with the Black Lives Matter movement that emerged nearly seven years ago.
About 8 in 10 black Americans say they approve of the protests. About half of white Americans approve, while about a third disapprove.
Overall, Americans are somewhat more likely to say the protests have been peaceful than violent, 27% vs. 22%, but another 51% think there has been a mix of both. White Americans are more likely than black Americans to call protests violent, 20% to 7%, though 54% of white Americans say there has been a mix. 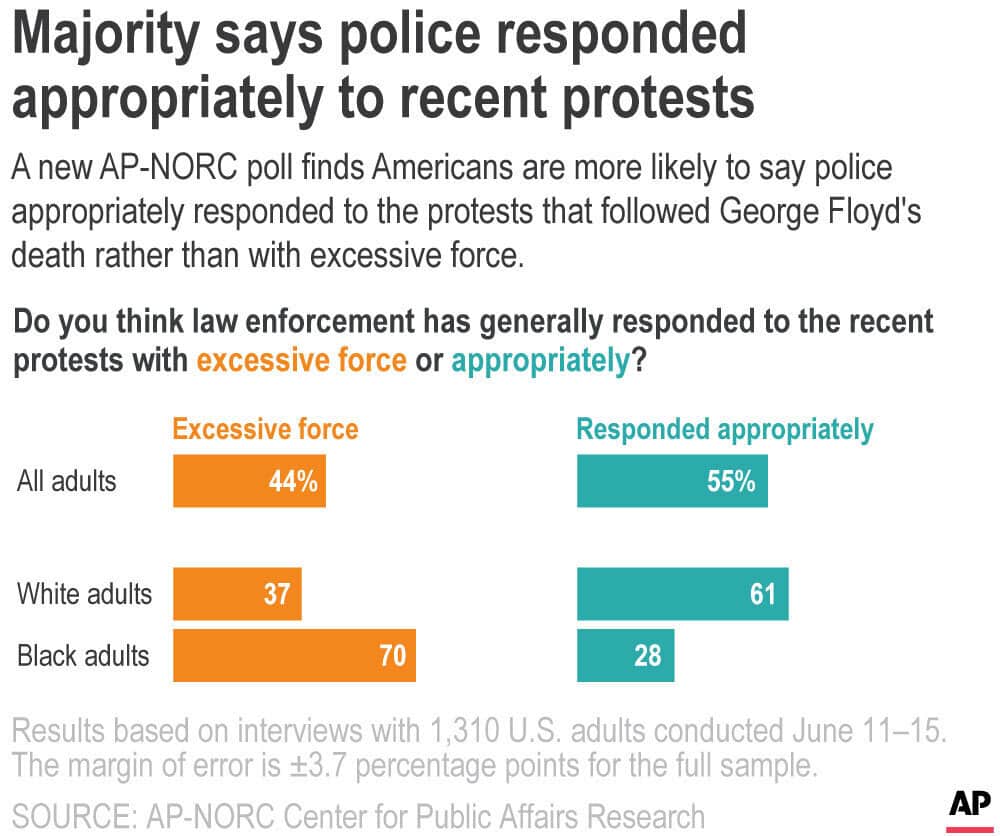 Just 12% Say Trump Made Things Better, While 33% Say His Response Had No Impact

Gillmore-Clough said he was disappointed by law enforcement’s use of excessive force at the protests. At times, police officers across the country were caught on video indiscriminately swinging batons, firing rubber bullets, deploying tear gas and pepper spray — even shoving people to the ground. Officers in many other places joined protesters, including some symbolically kneeling alongside demonstrators.
A majority of Americans, 55%, say law enforcement responded to recent protests appropriately, while fewer, 44%, say they used excessive force. And 54% say President Donald Trump’s response to the recent unrest — he suggested sending the U.S. military into cities where local officials struggled to quell unrest, before later backing off of the idea — made things worse.
Just 12% say Trump made things better, while 33% say his response had no impact.
Anne Oredeko, a supervising attorney in the racial justice unit of the Legal Aid Society of New York, one of the nation’s largest public defender agencies, said the New York Police Department’s response to peaceful protests undermined civil rights. Mass arrests also threatened public health during the coronavirus pandemic, making the idea that anyone believes the law enforcement response was appropriate troubling, she said.
“There’s something deeply bankrupt about our inability to see the value of life, across color and ethnicity,” Oredeko said. “There’s something missing in this country. If you understand the point that protesters are making, saying that there is a deep distrust of police and a need for systemic reforms, your response shouldn’t be to maim them.”
While 7 in 10 black Americans said law enforcement officers responded to the protests with excessive force, about half as many white Americans said that. Roughly 6 in 10 white Americans said law enforcement officers responded to protests appropriately.
Destiny Merrell, a 20-year-old black college student from Unadilla, Georgia, said she has not participated in the protests out of fear she could be harmed by police or other demonstrators.
“We matter, but we don’t matter to certain people,” she said. 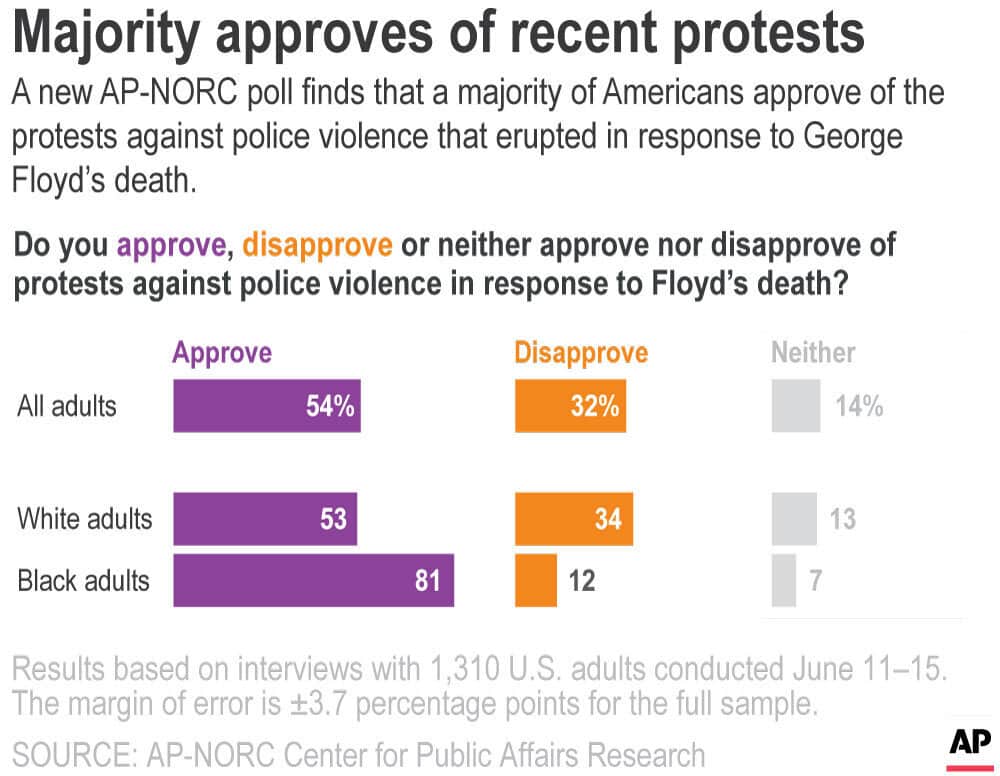 ___
The AP-NORC poll of 1,310 adults was conducted June 11-15 using a sample drawn from NORC’s probability-based AmeriSpeak Panel, which is designed to be representative of the U.S. population. The margin of sampling error for all respondents is plus or minus 3.7 percentage points.