Poll: Black Americans Most Likely to Know a COVID-19 Victim 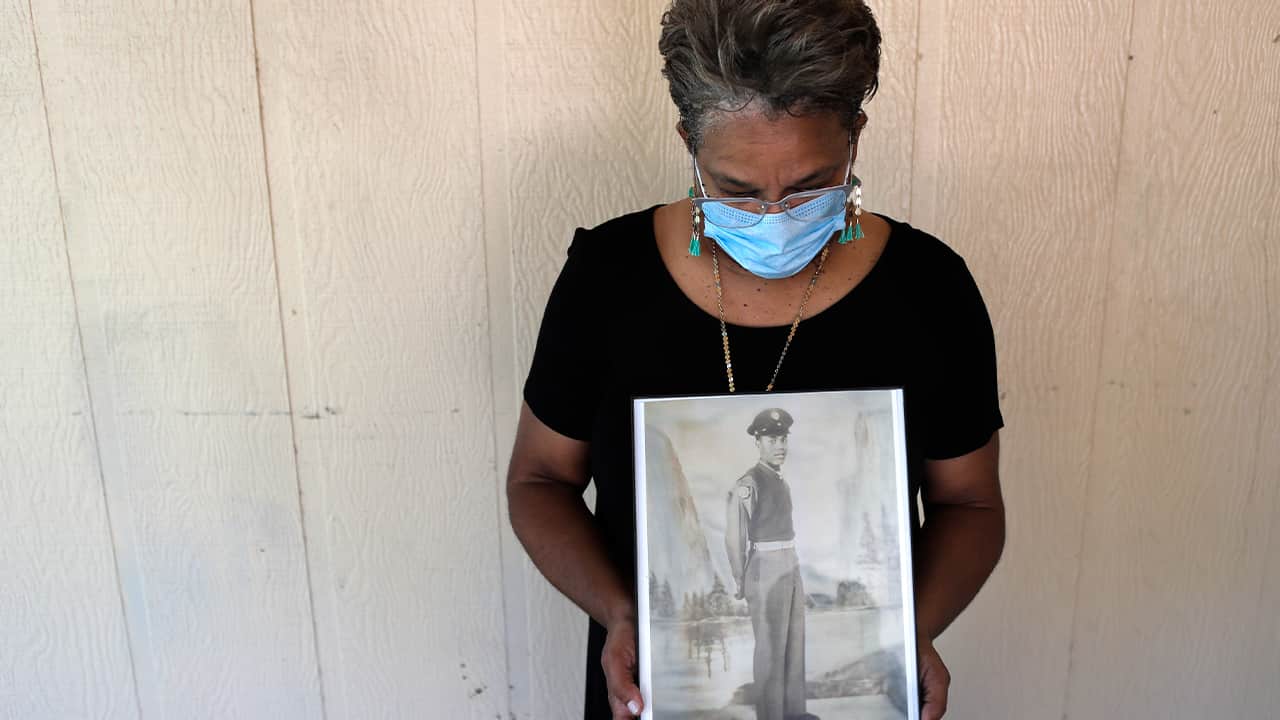 DETROIT — African Americans are disproportionately likely to say a family member or close friend has died of COVID-19 or respiratory illness since March, according to a series of surveys conducted since April that lays bare how black Americans have borne the brunt of the pandemic.
Eleven percent of African Americans say they were close with someone who has died from the coronavirus, compared with 5% of Americans overall and 4% of white Americans.
The findings are based on data from three COVID Impact surveys conducted between April and June by NORC at the University of Chicago for the Data Foundation about the pandemic’s effect on the physical, mental and social health of Americans.
While recent surveys conducted by the AP-NORC Center for Public Affairs Research have found that black Americans are especially likely to know someone who had the virus, the new data from the COVID Impact research further details the toll the pandemic has taken on black Americans.
Pre-existing conditions and limited access to health care have been identified as reasons black Americans have been particularly susceptible to the virus. Experts and medical professionals say the longstanding effects of structural racism and generational trauma exacted upon black Americans in the centuries following slavery also cannot be ignored.
“The health inequities that we’re seeing here are nothing new, because we’re starting in a place where during slavery, we had black women who were enslaved and were being experimented on by white male physicians,” said New York-based Dr. Uché Blackstock, a former associate professor at the NYU School of Medicine and the founder of Advancing Health Equity. “So our healthcare system is founded on racism, and our communities have been essentially made sick by racism. We carry the highest disease burden in almost every parameter. We were already in a crisis.” 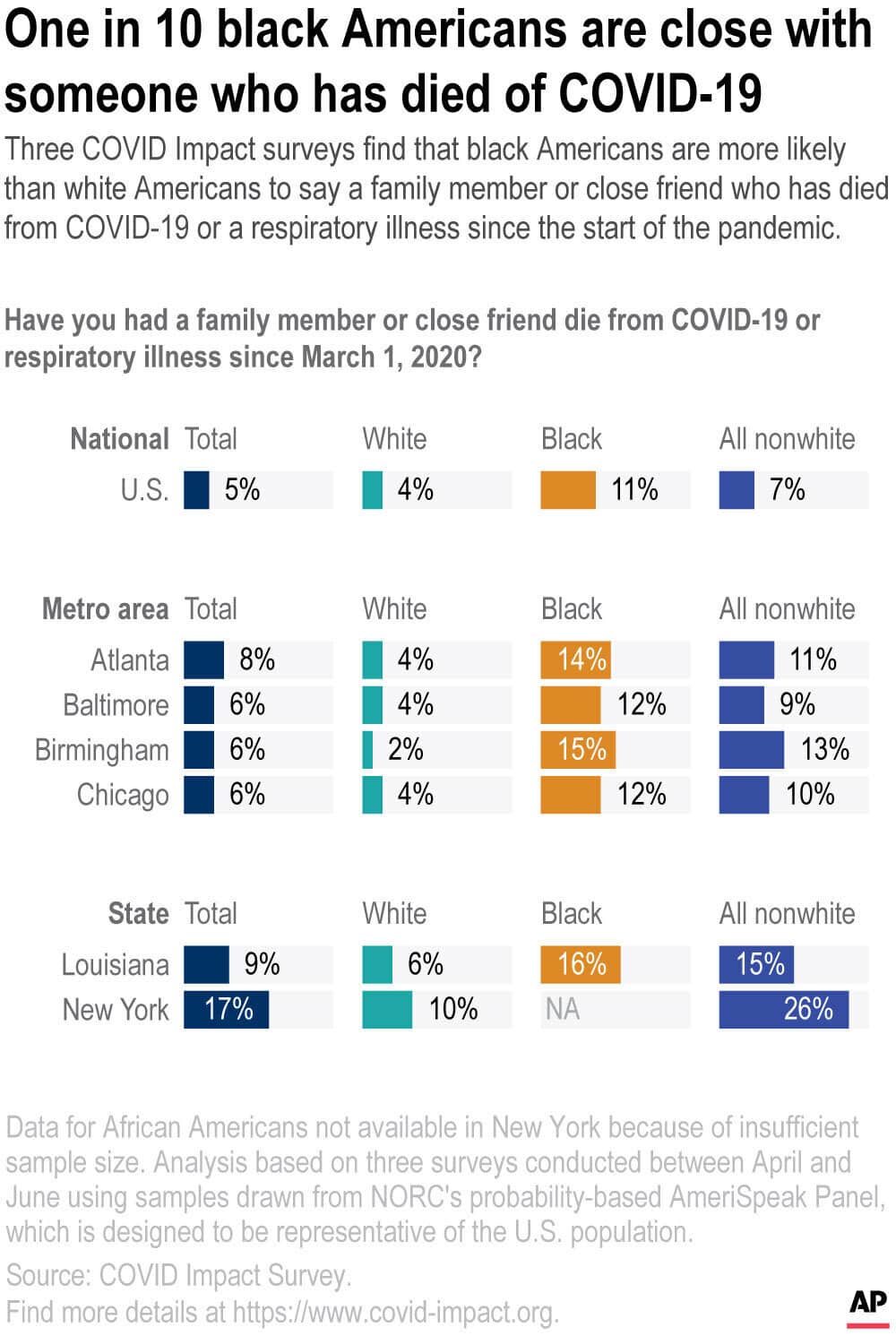 The Differences Are Equally Stark in Several Metropolitan Areas

The COVID Impact surveys show the racial gap is equally striking in some cities and states hit especially hard by the virus. In Louisiana, 16% of black adults, compared with 6% of white adults, are close with someone who has died, according to the surveys. Black people represent about 33% of the state’s population but account for 53% of the state’s nearly 3,000 COVID-19 deaths, according to data from the state’s health department.
The differences are equally stark in several metropolitan areas: Among black adults in Atlanta, 14% have a family member or close friend who has died, compared with 4% of white adults. The comparison is 12% vs. 4% in Baltimore, 15% vs. 2% in Birmingham, Alabama, and 12% vs. 4% in Chicago.
Twenty-six percent of nonwhite New Yorkers say a family member or close friend has died from COVID-19, compared with just 10% of white adults in New York City.
Meanwhile, an Associated Press analysis of data from state and local health departments nationwide found that more than a quarter of all COVID-related deaths nationwide have been black victims — nearly double the share of the black population in the areas sampled. The data, from early June, included nearly 87,000 deaths in which the dead person’s race was known in 38 states and Washington, D.C.
In a number of states, the disparity was even more outsized — for instance, in Michigan, black deaths per 100,000 black residents were four times the rate of white deaths per 100,000 white residents.
“I think we will have a national conversation, not only about those inequities, but about how we get to solutions, because it’s not just about what’s going on right now, it’s really what has gone on for decades regarding structural racism, implicit bias, discriminatory housing policies and the like,” said Dr. Patrice Harris, the immediate past president of the American Medical Association and the first African-American woman elected president of the organization.

Harris said the AMA launched a Center for Health Equity a year and a half ago to address implicit bias at the physician and institutional level. During the pandemic, she said, many stories have emerged of black patients detailing how their needs were ignored or unmet by doctors, which some experts say is indicative of a historical mistrust of the medical system.
“We heard with COVID-19, the stories, or some of the data that says that black men in particular were more likely to take advice from another black physician or that there have been studies where our younger colleagues believe the myth that blacks did not feel pain in the same way as whites,” Harris said. “AMA is going to lead these conversations and make sure everyone has information so we can address issues around implicit bias and discriminatory practices.”
The nation must also begin to grapple with the psychological trauma of the pandemic, coupled with the economic fallout, the civil unrest in the wake of several high profile killings of African Americans and witnessing black grief on a mass scale, said University of Michigan health behavior and health education professor Enrique Neblett.
Neblett, who studies the intersection of racism and health, said many African Americans could be dealing with depression, anxiety and other mental struggles.
“It’s the confluence of all these factors where it’s not just one or two things and that is really weighing hard and heavily on the psyche of black people,” Neblett said. “We do know that when you experience loss at unexpected times, there is scientific evidence showing that that’s related to worse health outcomes later on in life. I think these impacts may be generational.”
___
The three COVID Impact surveys were conducted between April and June. The national survey uses a sample drawn from NORC’s probability-based AmeriSpeak Panel, which is designed to be representative of the U.S. population. State and metropolitan area surveys were conducted using address-based sampling.