For much of its seven-year existence, the Black Lives Matter movement has been seen by many Americans as a divisive, even radical force. Its very name enraged its foes, who countered with the slogans “Blue Lives Matter” and “All Lives Matter.”

Times have changed — dramatically so — as evidenced during the wave of protests sparked by George Floyd’s death at the hands of Minneapolis police. Black Lives Matter has gone mainstream — and black activists are carefully assessing how they should respond.

Times have changed — dramatically so — as evidenced during the wave of protests sparked by George Floyd’s death at the hands of Minneapolis police. Black Lives Matter has gone mainstream — and black activists are carefully assessing how they should respond.

A few examples of the changed landscape:

Sen. Mitt Romney, a Republican stalwart, joined a Black Lives Matter march. Some NASCAR drivers, whose fan base includes legions of conservative whites, embraced the phrase. So did NFL Commissioner Roger Goodell. The mayor of Washington ordered the words painted in large letters on a street near the White House. Now, Black Lives Matter Plaza turns up in driving directions from Google Maps.

Like many black activists, Sakira Cook is pleased by such developments but also cautious. She and others worry that businesses and politicians will hijack the slogan without any real commitment to doing the hard work needed to fight racism.

“Black Lives Matter is not just a rallying cry,” said Cook, director of the Justice Reform Program at the Leadership Conference on Civil and Human Rights.

“It actually means you have to start to interrogate the systemic racism and inequalities that exist in our society and help to dismantle them. You must make sure you’re not co-opting this for your own purposes.”

The Black Lives Matter movement emerged amid anger over the acquittal of George Zimmerman, the Florida man who shot and killed 17-year-old Trayvon Martin in 2012.

As a slogan, “Black lives matter” soon became as widely heard at protests as “No justice, no peace.”

Nationally, the phrase was praised for its clarity and attacked as strident and hostile toward police. But support grew as the list of slain black people got longer: Eric Garner, Michael Brown, Freddie Gray, Walter Scott, Alton Sterling, Philando Castile. 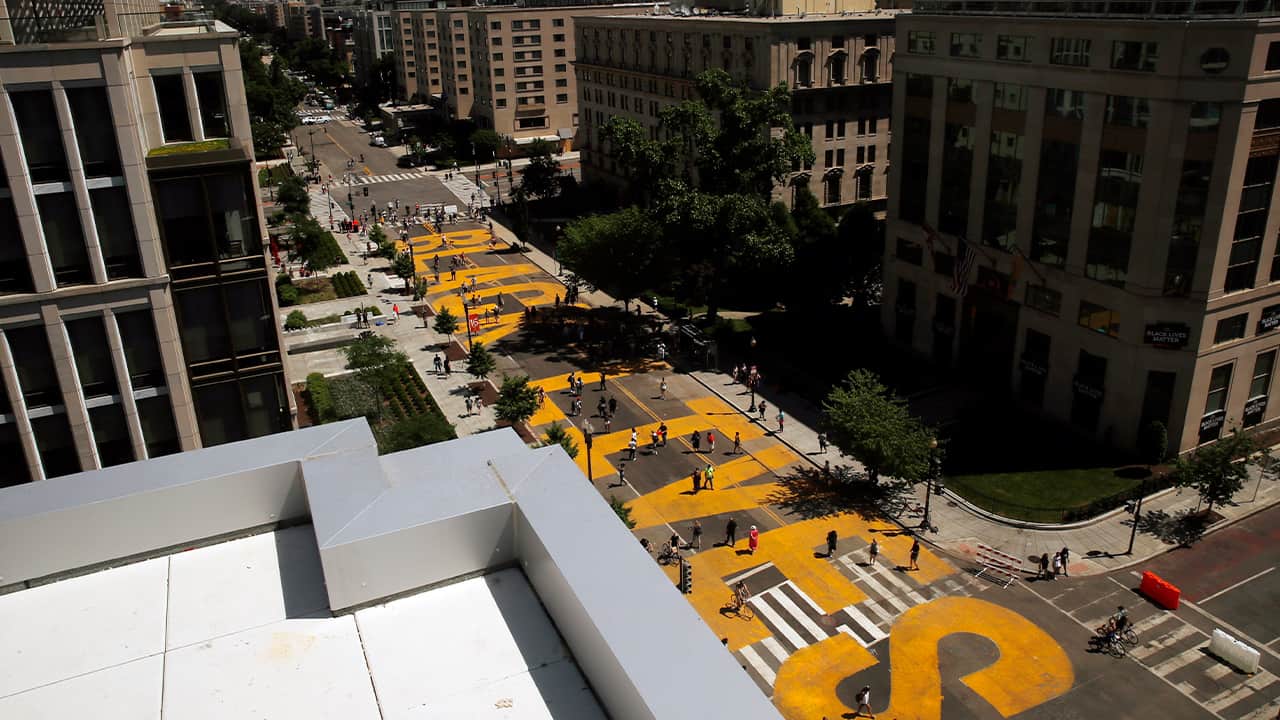 FILE – In this June 7, 2020, file photo, people walk on the words Black Lives Matter that was painted in bright yellow letters on 16th Street as demonstrators protest, near the White House in Washington, over the death of George Floyd, a black man who was in police custody in Minneapolis. The mayor of Washington ordered the words painted in large letters on a street near the White House. (AP Photo/Maya Alleruzzo, File)

“When we started Black Lives Matter, it was really to have a larger conversation around this country about its relationship to black people,” said Patrisse Cullors, one of three black women who founded the Black Lives Matter Global Network, with chapters throughout the U.S. and in Britain and Canada. “What keeps happening, time and time again, is we’re witnessing black people die on camera, and there is little to no accountability.”

While large donations poured into the new, loose-knit group of black-led grassroots organizations, prominent figures within the movement were subjected to years of rebukes and threats from police, their unions and elected officials.

Cullors said she and others were dismissed as too militant to be taken seriously by many of the individuals and corporations in the mainstream that now embrace their message.

In 2018, news reports revealed that the FBI’s counterterrorism division had begun tracking anti-police threats from black activists in the wake of deadly ambushes on police officers in New York, Texas and Louisiana. Many Black Lives Matter activists feared it was a repeat of the Cointelpro era, when the FBI illegally conducted surveillance and sabotage against civil rights groups and other organizations suspected of having links to the Communist Party in the 1950s and ’60s.

Today, the Black Lives Matter movement boasts a following of millions across social media platforms. A coalition known as the Movement for Black Lives, formed in 2014, now includes more than 150 affiliate organizations that have organized around such causes as defunding police departments and reinvesting in struggling black communities.

Its agenda focuses heavily on overhauling police training, the use of force and the punishment of rogue officers. The movement is also pressing to erase economic inequality and disparities in education and health care.

“There are hundreds of thousands of black visionaries around the world that are doing the work that people keep saying, ‘Oh, that’s never going to happen. … Not in this lifetime,’” Cullors said. “And look what happened. Something gets unlocked, and because we’ve already laid the seeds, we’ve already had the conversations, the people doing the work get to bear the fruit.”

Although the current surge of support for the movement is vindicating, it’s not sufficient to realize the original vision, Cullors said.

Malik Shabazz, president of Black Lawyers for Justice, praised “Black lives matter” as “one of the most brilliant and creative phrases of our generation,” one that has won acceptance well beyond the movement.

“There’s a danger it will become co-opted and mainstreamed,” he said. “But right now, anyone in our struggle would be happy more people are using it.” 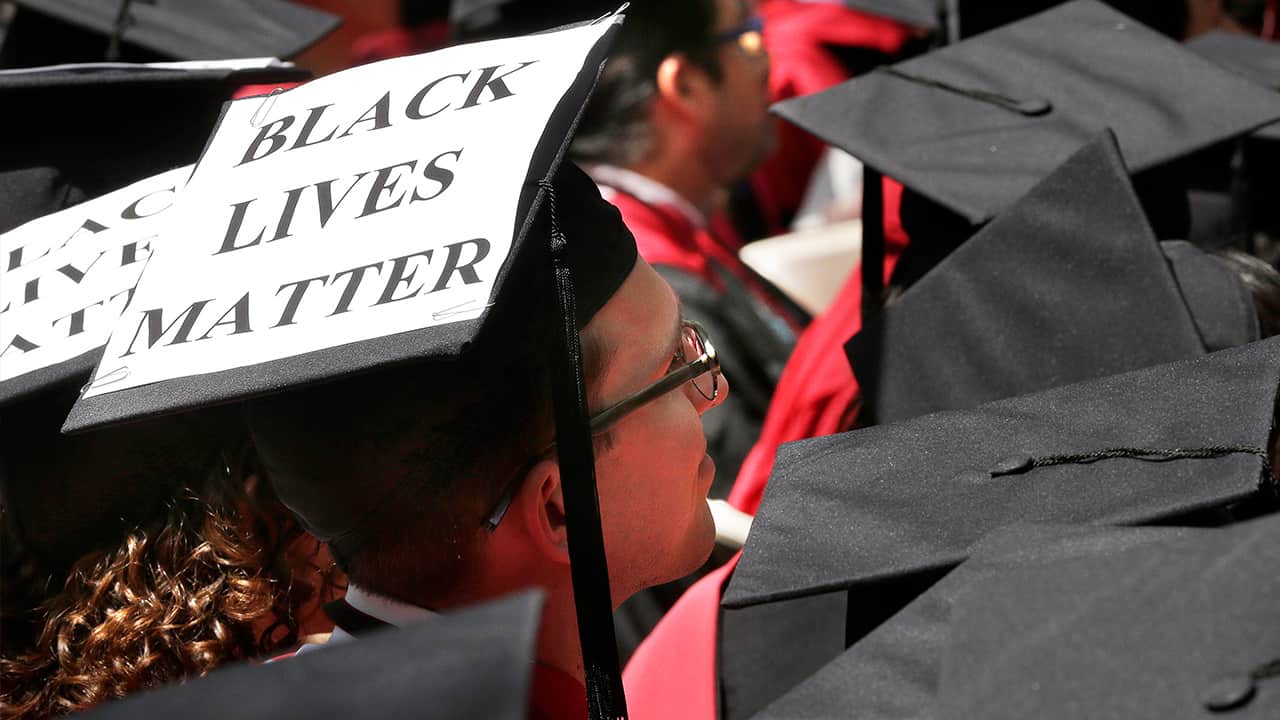 FILE – In this May 28, 2015, file photo, a graduate student of Harvard Law School displays the message “Black Lives Matter” on his mortar board during Harvard University commencement exercises in Cambridge, Mass. Black Lives Matter has gone mainstream — and black activists are carefully assessing how they should respond. (AP Photo/Steven Senne, File)

What Comes Next Matters More

Shabazz said it is important for black people to remain at the forefront of the movement, even as more Americans of other races voice support.

“It’s much more important for public officials and policymakers to inculcate that belief into the very fabric of how they lead and govern. Painting a street, marching in a rally, or wearing kente cloth are only useful if these symbolic acts translate into substantive action.” — Khalilah Brown-Dean, a political science professor at Quinnipiac University

“It’s up to us that we don’t get happy with a couple of weeks of protest and demonstrations,” he said. “This is a good start. We just have to dig in and stay for the long haul. “

Khalilah Brown-Dean, a political science professor at Quinnipiac University who has written about inequality and criminal justice reform, said uttering the slogan is easy. What comes next matters more.

“It’s much more important for public officials and policymakers to inculcate that belief into the very fabric of how they lead and govern,” she said. “Painting a street, marching in a rally, or wearing kente cloth are only useful if these symbolic acts translate into substantive action.”

The counter-slogans that emerged in 2014-15 — “Blue Lives Matter” and “All Lives Matter” — have surfaced only sporadically in the past two weeks. Plans for a Blue Lives Matter rally in Las Vegas were scrapped after the city’s police department refused to help promote it.

“All Lives Matter,” from the start, angered some black activists who said it minimized the entrenched racism faced by black people.

Last week, longtime Sacramento Kings TV broadcaster Grant Napear resigned after tweeting “ALL LIVES MATTER” when asked his opinion on the Black Lives Matter movement. On Saturday, the top editor of The Philadelphia Inquirer resigned amid a furor over the headline “Buildings Matter, Too.”