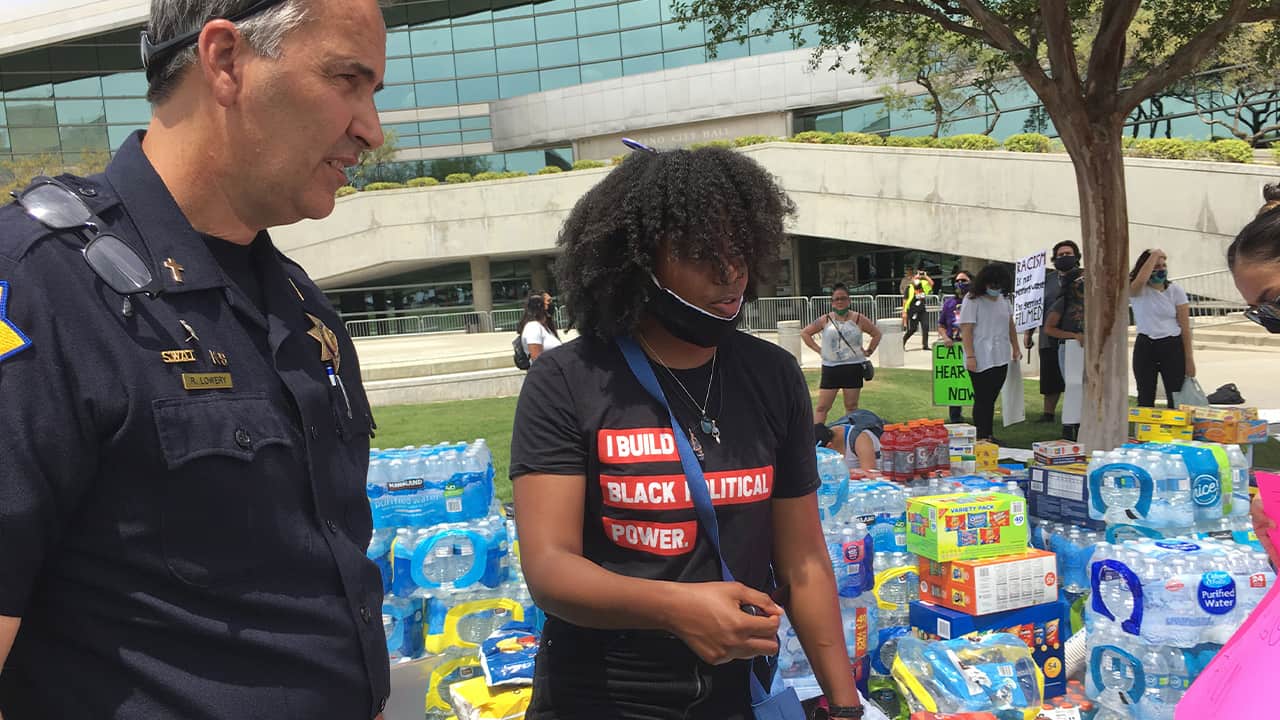 The Fresno City Council will form a Commission on Police Reform.

That announcement by council president Miguel Arias came after the Fresno State chapter of the NAACP presented a new and updated list of demands to City Hall and the police department.

The commission will be led by former councilman Oliver Baines, a former veteran Fresno police officer.

The campus group — which came to the city’s mainstream consciousness after organizing a peaceful George Floyd rally on May 31 in downtown Fresno attended by more than 3,000 — hosted a workshop on social justice at the council’s virtual meeting Thursday.

They made 31 demands, including legal consequences for police officers accused of brutality, recommendations on hiring and firing officers, and calling for transparency in everything the police department does.

Commission Has 90 Days to Deliver Recommendations

“To the tragic murder of George Floyd, my council colleagues and the mayor have been working to identify actions that will ensure George Floyd’s death and others like him are not in vain,” Arias said.

“The commission will include residents, stakeholders, local and national experts on community policing with a clear deadline of 90 days for bringing forward reform recommendations to this body,” Arias said. “The reforms need to represent the values and the needs of all our community.”

The exact nature of the committee and its mission will be announced later.

“We’re physically, mentally, and emotionally exhausted by this experience already,” Arias said. “But the good men and women of our police department, and our community that they serve, deserve nothing less than our best collaboration and thinking. Only through the strength and unity will we achieve a better version of ourselves and our city.”

The new set of demands updated the initial list of 10 the Fresno State NAACP made last week.

Fresno State NAACP chapter president D’Aungillique Jackson and other members of her group read the list from a PowerPoint presentation.

“We’re physically, mentally, and emotionally exhausted by this experience already. But the good men and women of our police department, and our community that they serve, deserve nothing less. then our best collaboration and thinking. Only through the strength and unity will we achieve a better version of ourselves and our city.”— city council president Miguel Arias

They asked Brand, mayor-elect Jerry Dyer, and police chief Andy Hall to “acknowledge the research-backed disparities for what they are and cease explanations based on personal opinion.”

No officers have been charged in either case, but the alleged victims have sued in federal court in separate cases.

Smittcamp, in a statement to GV Wire, would not commit to charging the officers. She said she looks forward to talking with NAACP leaders.

“I applaud and support the NAACP’s efforts to raise awareness and improve transparency on matters involving racial inequities within our systems of justice and public safety,” Smittcamp said. “I’m hopeful to have an opportunity to meet directly with the NAACP’s leadership group in order to have an open and productive dialogue about the specific instances cited in their letter as well as any other issues that involve our criminal justice system.”

Among the other demands made by the Fresno State NAACP:

— Restructure of the Civil Service Board, with the power to investigate police misconduct.

— Community involvement in hiring the new police chief, that the chief be a “highly qualified person of color,” and there be a vote on the new chief. Hall faces mandatory retirement next spring.

— Discard the current contract with the police union.

— Tighten police hiring practices to not allow those convicted of police brutality to join the force.

— Reduce the police budget to 45% of the city’s budget. It currently represents 49.5% of general fund spending.

— Dyer surrender his mayoral salary and reinvest it in the community.

“We stand in solidarity with these young people who are leading the way toward an equitable future where people are not killed, homeless, unemployed, sick, under-educated or shut out of civic discourse because of the color of their skin,” the letter said.

That includes a $130,000 investment in an African American health collaborative, which was also discussed during the NAACP presentation.

Even though the letter included the Fresno State NAACP’s original 10 demands, that doesn’t mean Fresno Drive supported each plank.

Heather Brown, co-chair of the Drive Race Equity Committee, said the group appreciated the NAACP bringing the conversation to the forefront.

“We support their effort,” Brown said. “We are supporting their courage.”

H. Spees, the mayor’s Director of Strategic Initiatives, was among the 42 signees of the letter.

“My Administration and I are actively engaged in ongoing, in-depth, and vital conversations with the community about the future of policing in the city of Fresno. The main goals are to respect the rights of every single person in Fresno and to improve public safety,” Brand said in a statement to GV Wire.

“As my Director of Strategic Initiatives, H. Spees is an important member of our team. I respect and welcome his point of view as I do with everyone I work with and talk to as we work towards achieving broad community-wide input and consensus on all issues.”

During public comment, one participant using the name Bryan Patterson started going on a rant, using the N-word before Arias cut him off.

Councilman Luis Chavez said he was offended by the rant.

“The racism that we just saw on our screen is a perfect example of the work that needs to happen in our community,” Chavez said. “The fact that somebody would pick this venue here to come and say those disgusting words just shows how much of a gap we have before we get to where we want to get to.”

“This is a person who’s cowardly. This is a person who on social media, behind a dark screen, has some misguided courage to say all the hateful things that they really have in their heart. And we reject it. I denounce it and I denounce all of that ignorant, stupid comment that’s completely unacceptable,” Bredefeld said.

Here are the PowerPoint presentations from the NAACP at today’s Fresno City Council meeting.