COLUMBUS, Ohio — A wave of police killings of young black men in 2014 prompted 24 states to quickly pass some type of law enforcement reform, but many declined to address the most glaring issue: police use of force. Six years later, only about a third of states have passed laws on the question.

The issue is at the heart of nationwide protests set off by the May 25 death of George Floyd, a black man who died after a white police officer in Minneapolis pressed a knee into Floyd’s neck for several minutes while he pleaded for air.

The issue is at the heart of nationwide protests set off by the May 25 death of George Floyd, a black man who died after a white police officer in Minneapolis pressed a knee into Floyd’s neck for several minutes while he pleaded for air.

Now, some lawmakers and governors are hoping to harness the renewed wave of anger to push through changes on the use of force they couldn’t manage after 2014, a year that included the deaths at the hands of police of Michael Brown in Ferguson, Missouri, Eric Garner in New York and 12-year-old Tamir Rice in Cleveland.

“We’re absolutely at a point in time where we have to do more,” said Maryland state Del. Vanessa Atterbeary, a Democrat who will chair a working group announced this week that will take up use-of-force standards for that state.

Pushback from politically influential law enforcement unions prompted some states’ use-of-force proposals to stall, while others have opted for voluntary programs to change policing practices. In some states, lawmakers have even broadened the powers of police, such as increasing penalties for those who attack officers or, as in Tennessee and Utah, limiting the power of independent review boards that investigate police conduct.

As of August 2018, at least 16 states had passed use-of-force laws, according to the nonpartisan National Conference of State Legislatures. A handful of those directly restricted what police could do. In Utah and Missouri, for example, force used by officers must be “reasonable and necessary.” Colorado has banned chokeholds, the maneuver used on Garner.

Other laws created task forces to set new standards, boosted training or improved tracking of officers’ use of guns and deadly force.

In 2014, Republican-led Wisconsin became the first state in the country to enact a law requiring outside investigations when people die in police custody — a law supported by the state’s largest police union.

This week, Democratic Gov. Tony Evers asked the Legislature to go further and pass a bill that would require law enforcement agencies to minimize the use of force and prioritize preserving life. In New Jersey, Democratic Gov. Phil Murphy and the attorney general said Tuesday they will update state guidelines governing police use of force for the first time in two decades. 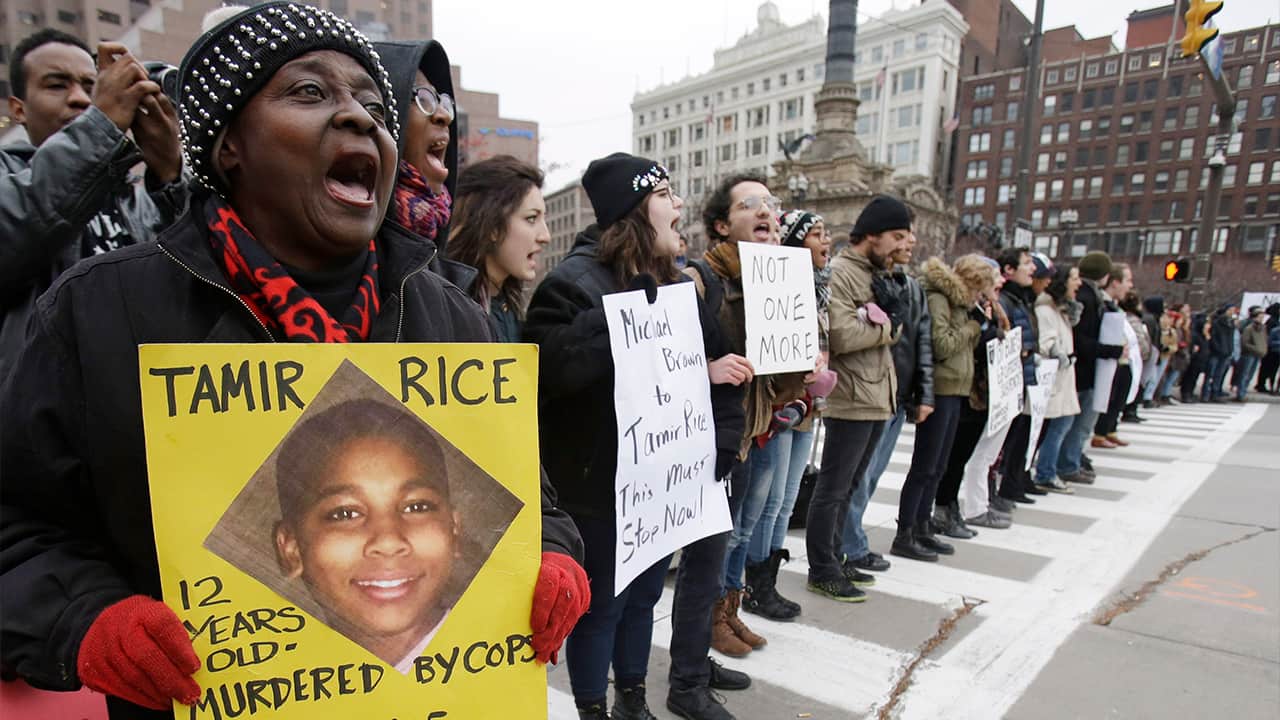 FILE – In this Nov. 25, 2014, file photo, demonstrators block Public Square in Cleveland during a protest over the police shooting of 12-year-old Tamir Rice. A wave of police killings of young black men in 2014 prompted 24 states to quickly pass some type of law enforcement reform, but many declined to address the most glaring issue: police use of force. Six years later, only about a third of states have passed laws on the question. (AP Photo/Tony Dejak, File)

Despite the sense in many places that this moment could produce real change, challenges remain.

Police unions have often resisted attempts to restrict officers’ use of deadly force and are politically potent in most states.

Paige Fernandez, a policing policy adviser at the ACLU, said many unions “have convinced themselves that police are unable to protect themselves if they value the bodily integrity and personal lives of the the people they are supposed to be serving.”

The National Fraternal Order of Police issued a statement acknowledging there is “no doubt” Floyd’s death has diminished public trust in police.

“Police officers need to treat all of our citizens with respect and understanding and should be held to the very highest standards for their conduct,” the organization said.

Since 2016, groups representing police nationwide have contributed $1.3 million directly to candidates for governor and attorney general and given at least another $1 million for independent expenditures that advocate for or against candidates for all state-level offices, according to an Associated Press analysis of data collected by the National Institute on Money in Politics.

Much of that money has been spent in California, where unions initially defeated reforms before the state enacted a pair of laws last year. One allows police to use lethal force only when necessary to defend against an imminent threat of death or serious injury to officers or bystanders. The second requires additional officer training.

The California debate was driven in part by the fatal 2018 shooting by Sacramento police of 22-year-old Stephon Clark, who was clutching a cellphone that officers said they mistook for a weapon.

The shooting in Ohio of Rice, whose toy Airsoft gun officers said they mistook for a real one, contributed to then-Gov. John Kasich creating the Ohio Collaborative Community-Police Advisory Board.

In Pennsylvania, a package of bills seeking to limit the justifications for the use of deadly force by police has stalled in the state’s Republican-controlled Legislature.

In 2015, the board adopted statewide standards limiting use of deadly force by police officers to defending themselves or others from serious injury or death. The state’s Republican-led Legislature opted against turning those recommendations into law, leaving police agencies to comply voluntarily.

Karhlton Moore, who leads the Ohio Department of Public Safety division that oversees the standards, said roughly three-quarters of Ohio residents now live in areas covered by police agencies that are either certified or in the process of being certified as upholding the standards.

But Ohio House Minority Leader Emilia Sykes, a Democrat who is black, criticized Republican lawmakers this week for failing to enact laws recommended by Kasich’s task force, saying their actions “show us time and time again that black lives do not matter.”

In Pennsylvania, a package of bills seeking to limit the justifications for the use of deadly force by police has stalled in the state’s Republican-controlled Legislature.

But changing the law isn’t enough, said Democratic Rep. Summer Lee, a chief sponsor of the bills who represents East Pittsburgh. Police around the nation have condemned the way Floyd was restrained.

Inherent racism must be dealt with as well, said Lee, who is black.

She said some lawmakers were paying lip service to the necessity of fighting racism — but weren’t taking action.

“We have bills — we have tangible things the Legislature can do today,” Lee said.