After Protests End, What Is Fresno's Path to Racial Equality and Prosperity? 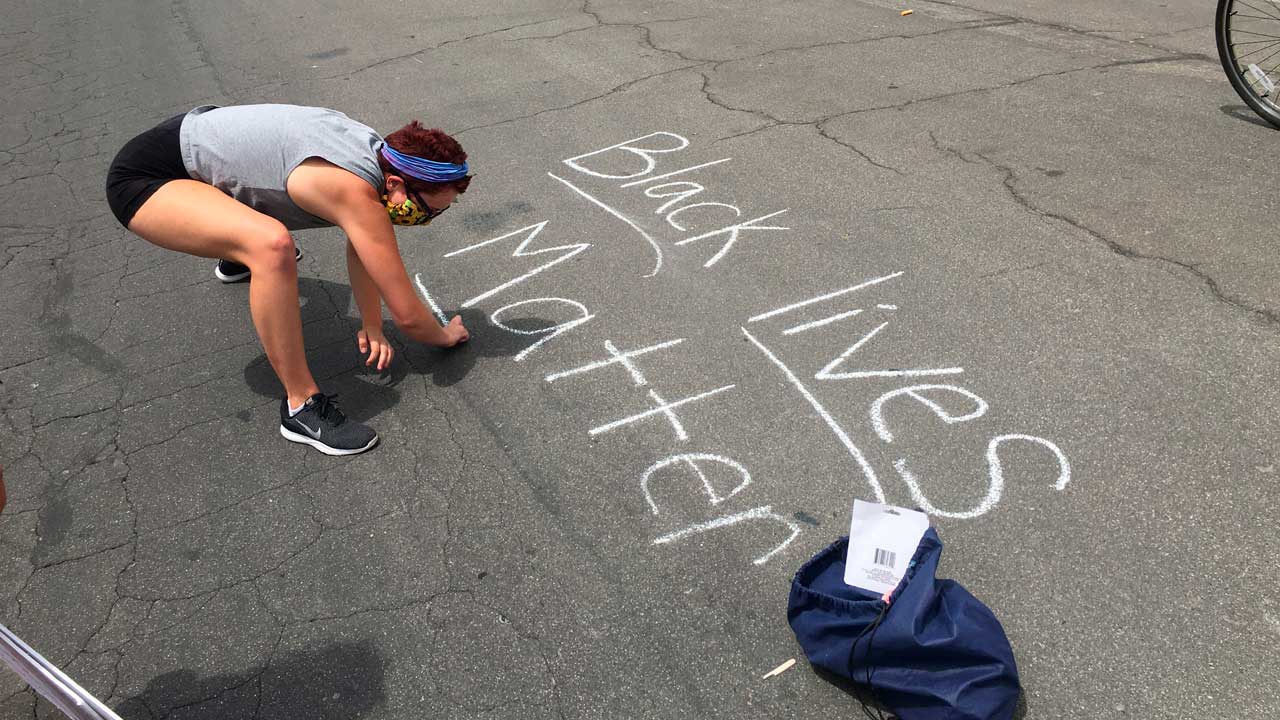 Here’s the reality for everyone seeking to remedy Fresno’s racial and social inequality:

While the death of George Floyd, a handcuffed black man under the knee of a bad white cop in Minneapolis, has ignited a call for community policing and police reform in Fresno, that call can’t be answered without a shift in budget priorities.

After the politicians have said (mostly) the right things and acknowledged the suffering of African Americans, and after the furor subsides, the challenge for change advocates will be sustaining their momentum in the difficult city of Fresno budget negotiations ahead — and for years to come.

The city budget, which is mostly about preserving bureaucracies and catering to union interests, is where new ideas go to die in Fresno.

A City’s Budget Reflects Its Values

A city’s budget reflects its values. And, Fresno’s police budget has long valued crime suppression over crime prevention and community policing. Will city councilmembers, police chief Andy Hall, and mayor Lee Brand make good on their eloquent words in the wake of Floyd’s death and expand community policing in a budget decimated by the COVID-19 shelter-in-place orders?

The city budget, which is mostly about preserving bureaucracies and catering to union interests, is where new ideas go to die in Fresno.

And, when former police chief Jerry Dyer succeeds Brand in January, will he be able to shift his mindset from heading the police department to leading a diverse city of 530,000 people where more than one in four residents live in poverty?

While a greater emphasis on community policing is essential to ending Fresno’s “Tale of Two Cities,” there is much more to do.

For example, will city leaders team with nonprofits and the business community to provide more capital and opportunities for black entrepreneurs? Businessman Chris Milton nailed it at Sunday’s downtown protest march when he talked about the need for more blacks to own businesses and homes.

Crucial to real progress is constructive participation by the entire community.

Will conservatives admit that “pull yourself up by your bootstraps” is many times harder when you’re born into multigenerational poverty, raised in a gang-infested neighborhood, and profiled by law enforcement either for the color of your skin or the zip code you live? 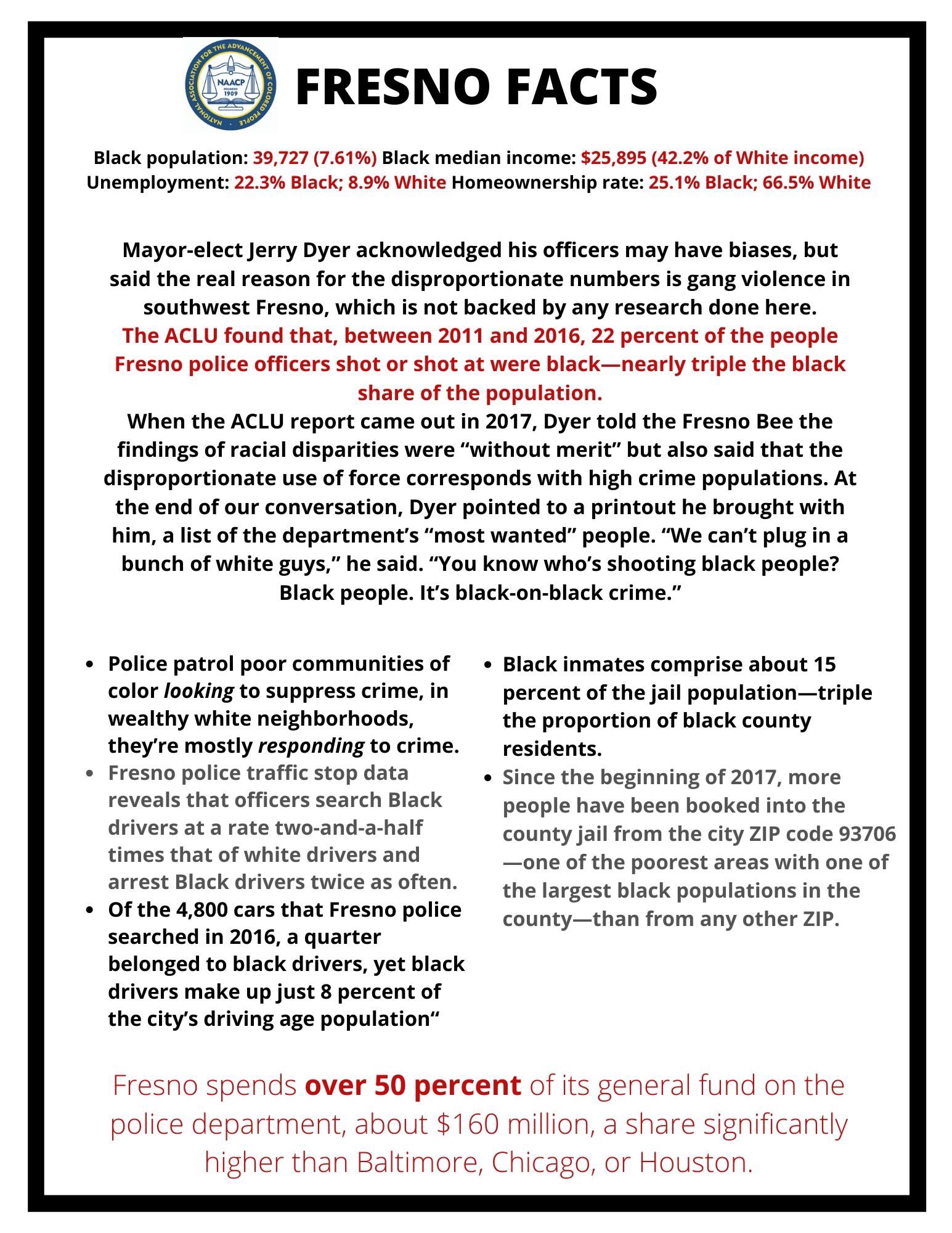 Do Pastors of White Mega-Churches Have the Courage to Take a Stand?

Will the leaders of white mega-churches on the city’s north end stand hand-in-hand with black pastors in southwest Fresno to hold City Hall accountable for investing in south Fresno and also insist that the police department (and its new police chief) work overtime to gain the trust of black and brown residents?

The silence of the mega-church pastors has been deafening thus far.

And, will all of us commit to voting out those elected officials and censuring those community leaders whose political oxygen is stoking the fires of racial discord and preaching the gospel of victimization on social media?

Understand: The oppressed have the right and an obligation to point out suffering. But Fresno’s right-wing politicians simply play “victims” on social media. Their legitimate grievances fit on the head of a thumbtack.

Will City Leaders Hold Fresno Unified Accountable for Its Failures?

Long term, the burden of empowering African Americans to succeed rests on the shoulders of Fresno Unified School District.

Will conservatives finally admit that “pull yourself up by your bootstraps” is many times harder when you’re born into multigenerational poverty, raised in a gang-infested neighborhood, and profiled by law enforcement either for the color of your skin or the zip code you live?

The district’s failure to educate black students is appalling, and it speaks loudly that Fresno leaders — with the exception of former mayor Alan Autry — have aided and abetted this travesty with their silence.

Hope Is Essential for Building a Better Fresno

George Floyd’s death, as cruel and needless as it was, has triggered a righteous demand for better tomorrows for people of color.

But progress requires hard work, shared purpose, and a willingness to listen. In the history of Fresno politics, those traits and skills often have been missing in action.

Politics is about power; it’s rarely willingly surrendered or shared.

But today we have hope, and that’s essential to building a better Fresno.