OAKLAND — A federal law enforcement officer in California was shot and killed and another wounded while providing security at the U.S. courthouse in Oakland amid one of the increasingly violent protests unfolding around the country.

“When someone targets a police officer or a police station with an intention to do harm and intimidate — that is an act of domestic terrorism,” Department of Homeland Security Acting Deputy Secretary Ken Cuccinelli said at a Washington, D.C., news conference Saturday.

The Oakland shooting occurred after a vehicle pulled up outside the Ronald V. Dellums Federal Building at about 9:45 p.m. Friday. Someone opened fire at two contract security officers who worked for Homeland Security’s Federal Protective Service, killing one and critically wounding the other, authorities said.

The officers protect federal court houses as part of their regular duties. DHS officials said the two officers were monitoring the Oakland protest over the police killing of George Floyd in Minnesota.

The identities of the officers have not been released.

A suspect hasn’t been named and it wasn’t immediately known whether authorities have determined if the shooting was connected with the protest.

Gov. Gavin Newsom called for patience and perspective as the federal investigation plays out.

“No one should rush to conflate this heinous act with the protests last night,” he said in a statement. 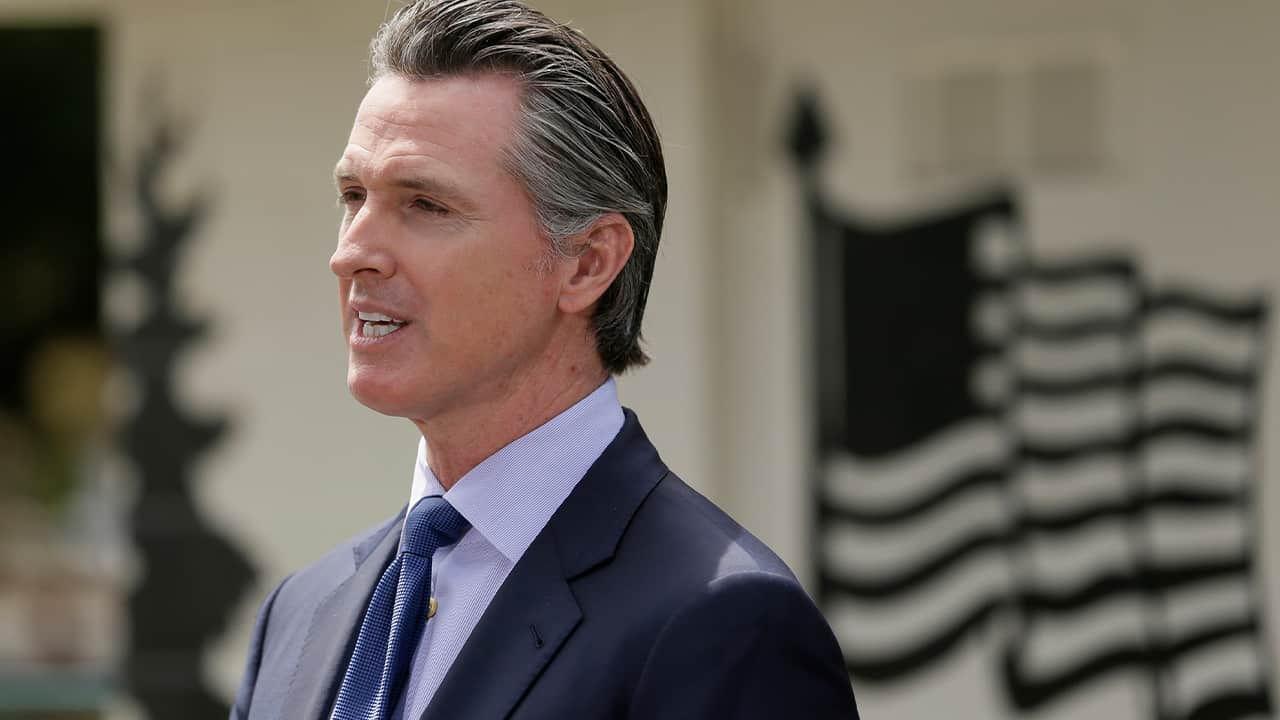 FILE – In this Friday, May 22, 2020, file photo, California Gov. Gavin Newsom speaks during a news conference at the Veterans Home of California in Yountville, Calif. California says churches can resume in-person services but the congregations will be limited to less than 100 and worshippers should wear masks, avoid sharing prayer books and skip the collection plate. The state Department of Public Health released a framework Monday, May 25 for county health officials to permit houses of worship to reopen. Most have been limited to online and remote services since March, when Gov. Gavin Newsom’s stay-at-home order took effect to slow the spread of the coronavirus.. (AP Photo/Eric Risberg, Pool, File)

Federal officials said they’re seeing more threats and assaults against law enforcement officers at protests and they will step up security measures to protect them.

“There are currently threats by some to attack police stations and federal buildings,” Cuccinelli said. “That violence not only won’t be tolerated, we are also committed to ensuring that it won’t succeed anywhere.”

“In California and across the country, there are indications that violent actors may be attempting to use these protests for their own agendas,” he said. “To those who seek to exploit Californians’ pain to sow chaos and destruction, you are not welcome.”

The protest in downtown Oakland began peacefully but spiraled into chaos late into the night. Some demonstrators smashed windows, set fires and threw objects at officers. Police said 13 officers were injured.

The federal building’s glass doors were smashed and the front entrance was sprayed with anti-police graffiti.

“We have to know right from wrong and not use the terrible tragedy in Minneapolis to perpetrate more violence.” she said “There’s never an excuse to shoot and kill a security guard, destroy businesses or injure innocent people.”