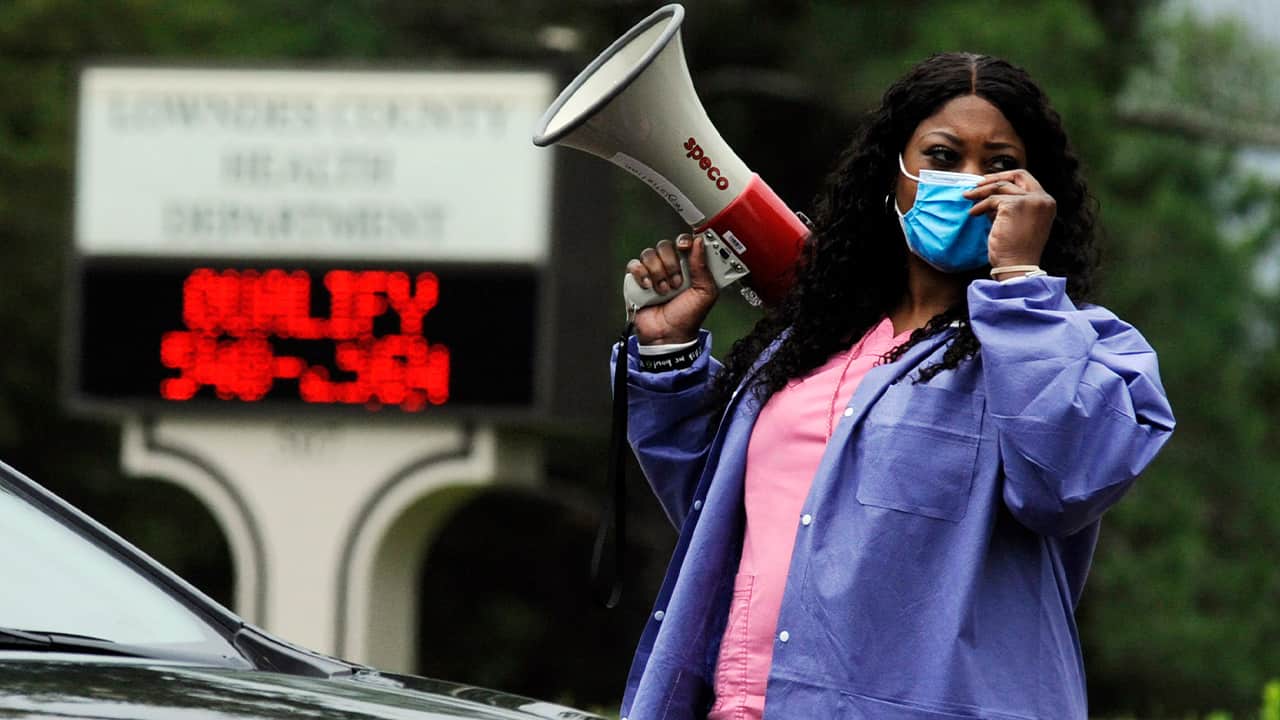 HAYNEVILLE, Ala. — Sparsely populated Lowndes County, deep in Alabama’s old plantation country, has the sad distinction of having both the state’s highest rate of COVID-19 cases and its worst unemployment rate.

“I think a lot of people fell into this idea that we were immune because we’re not in tight spaces like in New York and New Jersey, and we’re in wide-open areas.” — Dr. Ellen Eaton, who specializes in infectious diseases at the University of Alabama at Birmingham

Initially spared as the disease ravaged cities, the county and other rural areas in the state are now facing a “perfect storm:” a lack of access to medical care combined with poverty and the attendant health problems, including hypertension, heart disease, lung disease, kidney disease and diabetes, that can worsen the outcomes for those who become sick with the coronavirus, said Dr. Ellen Eaton.

“I think a lot of people fell into this idea that we were immune because we’re not in tight spaces like in New York and New Jersey, and we’re in wide-open areas,” said Eaton, who specializes in infectious diseases at the University of Alabama at Birmingham.

But no longer. Lowndes and nearby poor, mostly black counties in rural Alabama are facing an increase in confirmed infections. Their outbreaks are also affecting urban areas, since many of the sick need to be transferred to city hospitals.

Less than 30 miles from the white-domed Capitol in Montgomery, Lowndes lies along the highway where the Rev. Martin Luther King Jr. led voting rights marchers from Selma to Montgomery in 1965. Today, it has a population of 9,700, and 220 have now tested positive for the virus.

The surge in Lowndes and neighboring counties may be inextricably linked to their demographics — and thus their history as home to plantations where slaves grew the cotton that fueled the Confederacy. About 75% of Lowndes’ population is African American, and nearly 30% live in poverty. Its jobless rate has surged to 26% as area manufacturing plants closed during the pandemic.

The problem can also be seen elsewhere in the rural Deep South, where a tally by John Hopkins University shows a heavy concentration of cases.

Black people have suffered disproportionately in the pandemic. An Associated Press analysis in April of available state and local data shows that nearly one-third of those who have died are African American, with black people representing about 14% of the population in the areas covered in the analysis. 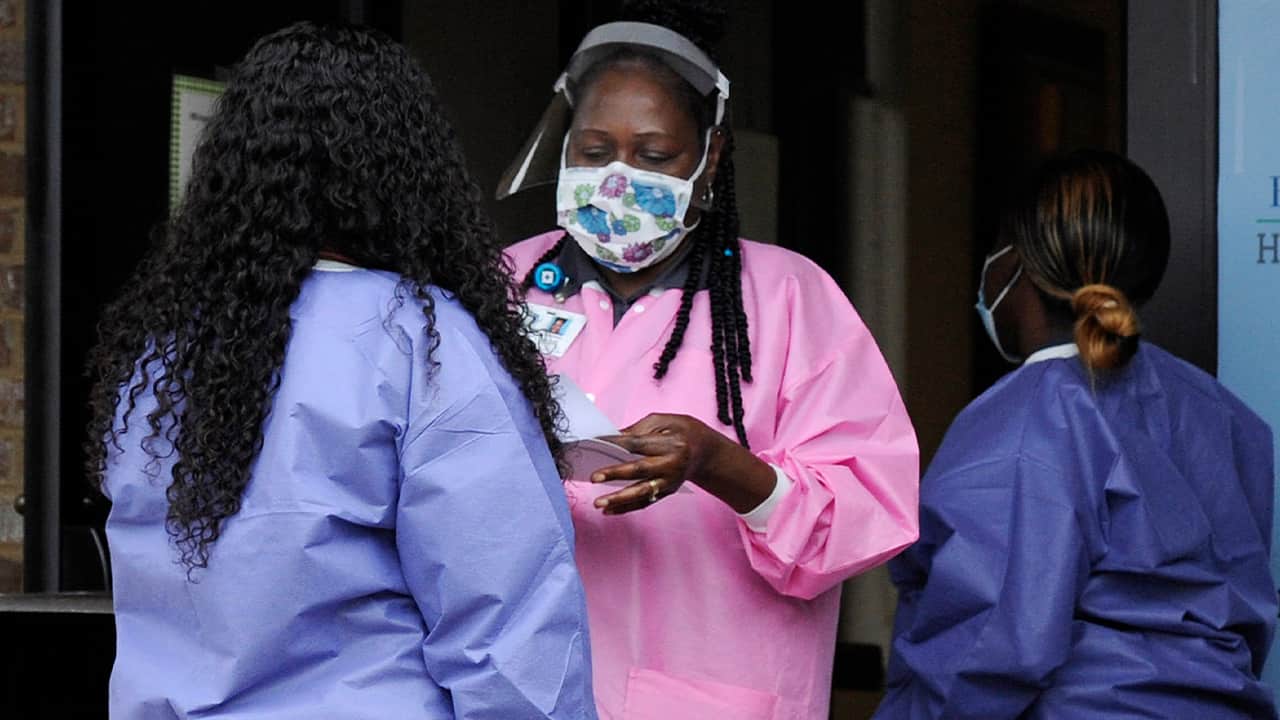 In this May 27, 2020, photo, health care workers talk outside a Lowndes County coronavirus testing site in Hayneville, Ala. Experts say Lowndes County and nearby poor, mostly black counties in rural Alabama are now facing a “perfect storm” as infections tick up: a lack of access to medical care combined with poverty and the attendant health problems that can worsen the outcomes for those who become sick. (AP Photo/Jay Reeves)

About 27% of the State’s 4.9 Million Residents Are Black

As can be seen in Lowndes, some health conditions that exist at higher rates in the black community make African Americans more susceptible to the virus, and they also are more likely to be uninsured.

Alabama’s figures reflect that national picture. About 27% of the state’s 4.9 million residents are black, but African Americans represent 44% of the 590 who have died.

For most people, the coronavirus causes mild or moderate symptoms. For some, especially older adults and people with existing health problems, it can cause more severe illness and lead to death.

County administrator Jacquelyn Thomas used her fingers this week to count off five elderly Lowndes residents who’ve died of the disease recently. She fears what will happen as the state loosens restrictions even further, and the weather gets warmer.

Nearly a third of the state’s total cases came in the last two weeks as Gov. Kay Ivey loosened regulations meant to stop the spread of the coronavirus in order to revive the economy. The days since have included high school graduation ceremonies that drew thousands; packed beaches; reopened bars and churches; and plenty of bare faces unprotected by masks.

“We know a little bit of that has to do with increased testing, but I don’t think that explains all of it,” said Harris.

With caseloads increasing in areas including Lowndes County, which doesn’t have a hospital, patients are seeking health care in cities like Montgomery, which Harris said appears to be having “widespread” community transmission of coronavirus on its own.

Other Worrying Signs in the Poor Communities

Montgomery Mayor Steven Reed announced last week announced that intensive care units in the city’s hospitals were filled or nearly filled. While Harris said hospitals have the ability to increase ICU capacity if needed, city officials said it should be considered a warning sign of the virus’s spread and urged people to be vigilant. Reed said he raised the alarm at the request of local health officials.

While many in the area Lowndes aren’t taking recommended steps to ward off disease, others are. Wearing a protective face mask at a convenience store gas pump, Marvin Johnson jumped in his car as soon as a masked stranger approached.

“It has not subsided. It hasn’t plateaued,” Reed said. “It’s not over. We haven’t won the battle with COVID-19 yet,” Reed said.

While many in the area Lowndes aren’t taking recommended steps to ward off disease, others are. Wearing a protective face mask at a convenience store gas pump, Marvin Johnson jumped in his car as soon as a masked stranger approached.

“I don’t want to get sick,” he said through a cracked window.

Shenae Harris also wore a mask, but she is worried that a lot of other county residents aren’t covering their faces and aren’t making any attempt to stay 6 feet away from others, as recommended.

“People are still having parties and get togethers,” she said.

Dr. Karen Landers, the district medical officer for the state, said health officials aren’t aware of any single place, like a nursing home, that is driving an increase in cases in the county.

But Thomas, the county administrator, sees other worrying signs in the poor communities around her.

Like other places with high numbers of lower income residents, multiple generations of families often live in small homes in the county, she said. Young people who tend to take fewer precautions against the virus go home despite the risk of infecting parents and grandparents whose lives are more fragile, Thomas said.