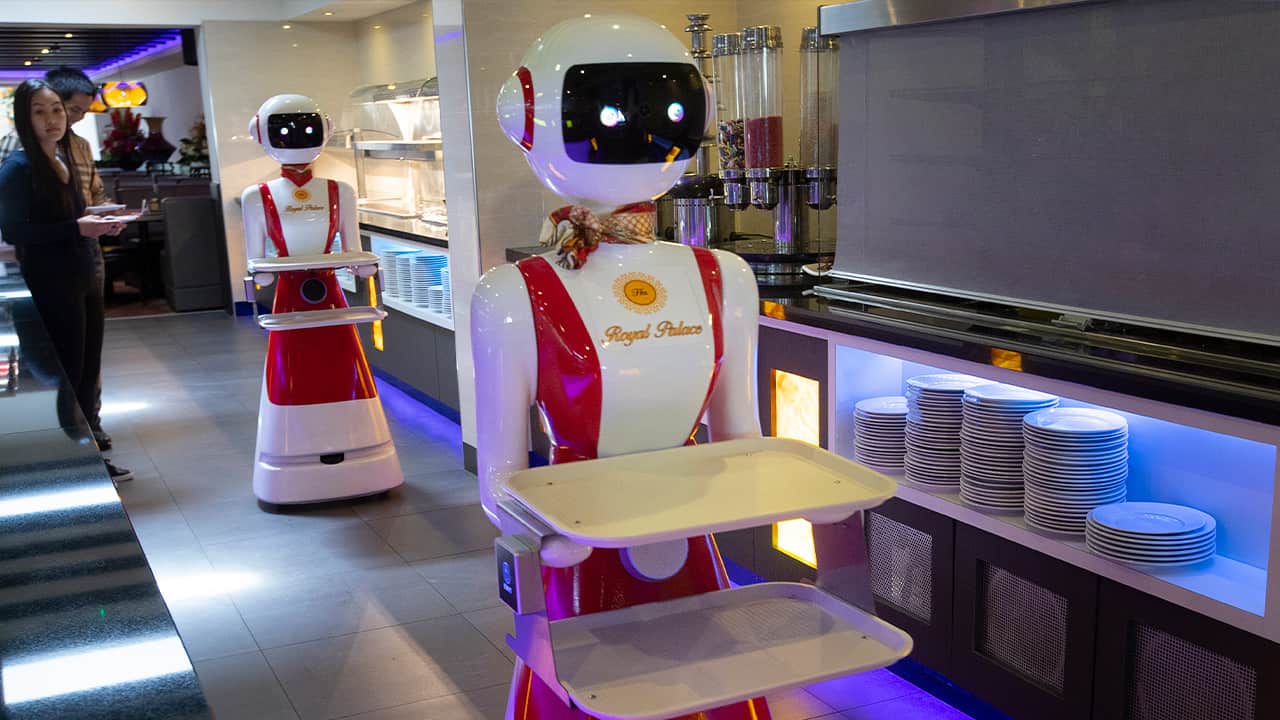 RENESSE, Netherlands — You can always count on a robot for perfect timing.

When Shaosong Hu saw robotic waiters serving food in China last fall, he knew exactly what he wanted for his restaurant in the Dutch beachside town of Renesse. He just didn’t have a clue how useful they would prove.

The coronavirus pandemic has turned a whimsical idea into perhaps a window into a dystopian future where a human touch may make people cringe with fear, and a waiter clearing the table sends a customer tense with stress — only to be relieved by a soothing brush with plastic.

“They came in just ahead of that time,” said Hu’s daughter Leah, who also works at the restaurant, the Royal Palace.

Now, his two shiny white-and-red robots glide across the dining area’s floor where, once the restaurant reopens, they will be serving Chinese and Indonesian specialties like Babi Pangang and Char Siu at $17 each.

“Hello and welcome” the robots say — in a voice best described as pre-programmed.

Their duties will include greeting customers, serving drinks and dishes and returning used glasses and crockery. It’s unclear whether diners will be expected to tip.

One thing the robots will certainly do is see that social distancing rules are respected. “We will use them to make sure the 5 feet we need during the corona crisis sticks,” Leah Hu said.

“I’ve had negative reactions,” she said, “such as saying it makes it impersonal.” But it may prove just what customers crave when Dutch restaurants are allowed to reopen on Monday as lockdown restrictions are further eased.

Dutch Restaurants Have Been Hard Hit by the Crisis

In a stab at quasi-human panache, one robot wears a chiffon scarf around its neck. And the hunt is on to give the two human names, with a competition already underway on Instagram. “We don’t have a favorite yet. But the suggestion of Ro and Bot is out. We want to give them a normal name,” said Leah Hu.

Dutch restaurants have been hard hit by the crisis and have been closed for over two months. As of Monday, they will be allowed to reopen but with a maximum of 30 customers. That will force some layout adaptations in the Royal Palace where the robots’ programmed floorplan may have to be changed at the last moment.

And in the southern Zeeland province, the Hus don’t want to hear any complaints about the robots robbing young people of a job. They say it’s hard enough anyway to find staff in a rural region without any major city close by.

“They help us with the work we do,” said Leah Hu. “We are often busy and cleaning tables and the robots give us an extra hand.” It also frees up the human staff for some more personal contact.

“We are not disappearing. We are still here. They will always need people in this industry,” she said.

Adapting to the robots, even your own, remains a challenge. “For us, it is still trying to see what works,” she said.